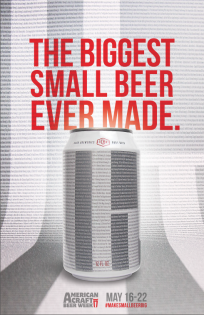 In honor of American Craft Beer Week, May 16-22, more than 4,000 small and independent craft breweries from all 50 states came together to produce "The Biggest Small Beer Ever Made." The beer was inspired by one recipe, and "each participating brewery was invited to brew the beer with the understanding that even with the same recipe, no beer could be exactly the same," wrote CraftBeer.com.

The beer, which could be sampled at more than 100 breweries around the country during the beer enthusiast's dream week, was available in commemorative cans adorned with all 4,000+ breweries. The story behind the beer is a quite heartwarming, albeit an emotional narrative, that brought about a beer collaboration like no other.

The printing of the can, however, may not have been as pleasing as the story that brought the beer to fruition. With more than 4,000 breweries printed in small type spanning 360 degrees of the can, producing the can could not have been an easy task. And, as Adweek wrote about the limited edition can, it's not the most eye-catching of designs.

In other beer-related packaging news, Saltwater Brewery has taken a big step for the environmentally conscious beer drinker. Drinkers of Saltwater brews can say so long to the days of cutting the plastic six pack rings after consumption, a common practice to make sure that if they ended up in the ocean, they at least wouldn't end up wrapped around the bodies of fish or turtles. Even with those precautionary moves, the plastic could still be ingested, potentially causing harm or even killing the unlucky sea creatures.

The plastic alternative is made from barley and wheat remnants left over from the brewing process. It is 100% biodegradable, compostable and edible, and yet, it's still strong enough to handle the weight of the six pack cans.

According to a video posted on the Huffington Post, "If most breweries implement this technology, the cost would be competitive." However, as of right now, it remains expensive to produce the plastic alternative — although, the company says that it hopes beer drinkers will be willing to pay more to help promote a more environmentally conscious option.

“We hope to influence the big guys,” Chris Goves, Saltwater Brewery’s president, said to the Huffington Post. “And hopefully inspire them to get on board.”

It would be interesting to know if this plastic alternative could be transitioned into use for other packaging. With so many plastics in use in the packaging world, if this innovation could be developed into a printable substrate, who knows how far it could go?

packagePRINTING has reached out to Saltwater Brewery for comment.