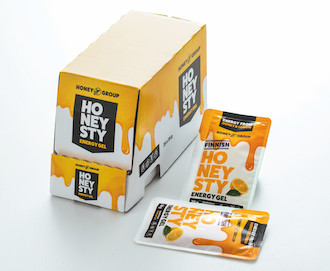 Opening a package, regardless of size or format, is almost always a two-handed endeavor. Whether it’s unscrewing a cap, tearing open a sachet, or unzipping a resealable closure, opening a package and accessing the product inside is not always the easiest task to complete while on the go.

With a desire to solve this problem, Antonio Burattini, an experienced packaging industry professional for more than 40 years, approached his son Christian with an idea for a package that could be opened with one hand. In 2018, the Burattinis, along with their partner Jesper Gustavsson launched V-Shapes, a pioneering packaging platform, that makes opening single serve packaging with one hand a reality.

The company is based in Bologna, Italy, but has expanded worldwide, including a sales staff stationed throughout North America. The packaging products V-Shapes produces are reminiscent of a flexible sachet, but rather than tearing the package open at the top, all the consumer has to do is bend the two ends of the package inward, allowing it to open in the center, releasing the product inside.

While the packaging format is innovative in its structural design, the printing and converting process is pioneering in its own right. Through a partnership with Memjet, V-Shapes has developed a platform in which these flexible packages are digitally printed, formed, filled, and sealed in-line.
“By printing in-line, we never wind or unwind the reel, which means we solve the problem of setoff ink,” Christian Burattini says. “What has stopped digital printing in general in the last 20 years is that – the fact that you print and then you have a migration.”

Prior to joining V-Shapes, Hayre co-owned Richmond, British Columbia-based flexible packaging company Taipak, which was acquired by TricorBraun in 2017. He explains that the V-Shapes production platform can provide significant efficiency advantages to conventional processes such as rotogravure and flexography. The company’s AlphaFlex production platform is the first in-line implementation of Memjet’s Duraflex A3+ printheads and water-based inks. Additionally, V-Shapes partnered with Memjet on the launch of its VS dflex near-line printer, a roll-to-roll module that can be integrated with V-Shapes packaging machines.

With the ability to significantly reduce the lengthy lead times associated with flexible packaging production on gravure and flexographic platforms, Hayre says that V-Shapes in-line systems provide advantages both for package printers and converters and brand owners.

“You can literally have your printing done in front of you – and not only print it, but form, fill, and seal all within the hour right in front of your eyes,” he says. “So the problem we’re solving is you don’t have to wait eight weeks or 10 weeks or seven weeks for a print job, and for you to realize what it looks like.”

In addition to reducing turnaround times, Hayre says another advantage of the V-Shapes platform is its footprint. He says the company’s production platforms can be implemented in package printing and converting companies, co-packaging facilities, and directly at brand owner locations. He shares that V-Shapes installed a system at a brand owner’s site, in which it operates within 400 sq. ft.

However, for larger-scale operations, he says the ability to gang jobs on the digital platform makes for a highly efficient process without the typical lag time from changeovers between jobs and off-line converting.

“Say you’re a copacker and you’re packaging hand sanitizer for example on a Thursday,” Hayre says. “You can now gang up the jobs on that machine so you can have a job for Walmart, for Fred Meyer, etc. You can line them all up and print 100,000 for one, print a million for another, and print a million for Walmart all on the same machine. Not only will you have different logos for these, but you can print, form, fill, and seal all in the same unit.”

Beyond the convenience of its packaging format and its production efficiency, Burattini says that V-Shapes provides sustainability benefits that are desirable to brand owners and consumers. Among the common knocks against single-use flexible packaging are its inability to be easily recycled and challenges in dispensing the entirety of the product.

From a product waste standpoint, Burattini says that V-Shapes’ sachets feature an internal semi-rigid component that assists the user in dispensing all of the liquid or gel inside the sachet, ensuring that none of the product is inadvertently discarded. But where V-Shapes thrives in its sustainability attributes, especially when compared to its single-serve packaging counterparts, is that it can be easily recycled.

Burattini explains that because V-Shapes packaging remains in one piece once it is opened, it can be recognized by the automatic sorting systems used in the recycling process. With a package that is torn open or features multiple components, this can add challenges and complexity to the recycling process. V-Shapes, however, has been recognized as recyclable by two parties.

“When you have any kind of single-serve, single-dose system, you divide it in different pieces,” he says. “You have a bottle or have something you tear and break. These are the ones that are the most problematic, and you put it in the garbage.”

What makes V-Shapes unique among packaging formats is its functionality in various market segments. With the packaging’s ability to reduce waste, provide convenience and portability, and offer a tamper-evident platform, the dosing and delivery innovation of V-Shapes is poised to alter how brands and consumers think about single-serve packaging.

“When we build a machine, it’s built custom based on our customer’s needs,” Hayre says. “We also understand the problem we have here in North America. A big term we’ve heard over the last 24 to 36 months is ‘dosing and delivery,’ which is a huge issue. How do we deliver something to a customer in the right dosage in a format that makes sense?”

Award Winner Is Sweet Example of the Power of Print