How Brand Owners of All Sizes Benefit from Digital Printing 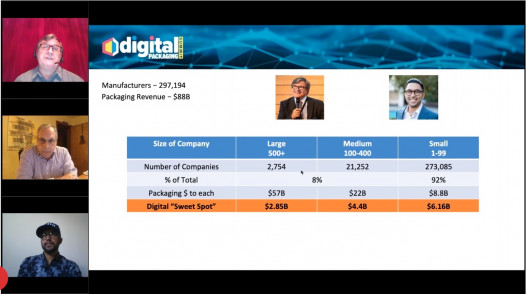 A common misconception about digital package printing is that it can only benefit certain brands, such as those that solely rely on short runs, or those with the means to invest in the personalization or variable elements the technology provides. But in a panel conversation during the Virtual Digital Packaging Summit, representatives from two different brands shared how digital printing has benefited their companies.

Mondelēz, one of the largest global snack food brands, was represented by Patrick Poitevin, the company’s principal scientist, who joined the call from the U.K. On the other end of the company size spectrum was Eddie Simeon, co-founder of Hella Cocktail Company, a producer of high-quality bitters, mixers, and other cocktail-related products. Though Hella is a small company with a staff of four, the brand has grown substantially in recent years, and relies on digital printing for its labels and packaging.

To open the conversation, Kevin Karstedt, CEO of Karstedt Partners and co-chairman of the Digital Packaging Summit, shared some statistics surrounding manufacturing companies in the United States. Karstedt explained that of the nearly 300,000 companies, 273,085 are small sized organizations, which represent approximately $6 billion in packaging production.

While Mondelēz operates a variety of snack food brands around the world, Hella Cocktail Co., is a more recent startup, launched by Simeon and his partners, that has expanded into multiple product lines including cocktail bitters, mixers, and the company’s new line of non-alcoholic Bitters & Soda sparkling beverages.

As a smaller company, Simeon said it is important that Hella is able to acquire its inventory in low quantities, whether it is the ingredients to create its craft products, or the labels that adorn them. He explained that like most startups in the food and beverage market, Hella Cocktail was launched by “industry outsiders,” who had prior careers in other industries, but left to pursue their entrepreneurial dreams.

When initially searching for a label provider, he said that the team at Hella did not initially know the difference between conventional technologies like flexography, and digital printing. And as a new brand, the cost structure that digital provided, along with added value opportunities, was beneficial.

“Whether it’s digital or not digital, the most important thing has been price,” Simeon said. “The value proposition was more relevant to me. How can you turn around a value prop to companies like mine?”

While digital printing is a cost effective technology for the short run needs of small brands, it is also a technology that can provide creative opportunities that conventional technologies cannot, and Poitevin shared how Mondelēz has made the most of these capabilities.

For example, he described how Oreo implemented an e-commerce initiative in recent years that relied on the customization that only digital can provide. In this program, consumers could go online and custom color their own Oreo packages, which would then be printed and delivered within four days. Not only was the brand able to sell the custom packs at a much higher margin than the traditional product, Poitevin said Oreo was able to capitalize on the millions of hits the initiative received via Facebook and Twitter shares.

“We had a lot of exposure and free publicity via social media,” he said.

Poitevin added however, that even at massive conglomerates like Mondelēz, the need for short runs is still prevalent. He explained how within large companies, certain departments can be run like small companies, and benefit from the advantages of digital printing, whether it is short runs, or the quick turnarounds needed for test marketing and improving speed to market.

“Everything becomes smaller and faster so your development time needs to be shorter as well,” Poitevin said. “Instead of two years of development time for a new product, we would like to have it on the market in three months … that is where we are looking for collaboration with digital printing suppliers."