Attendees of the eighth annual Digital Packaging Summit started Day 2 with a warm breakfast and friendly networking, before diving into the robust educational agenda, case study presentations, and 1:1 meetings for the day and a lively Casino Night in the evening. 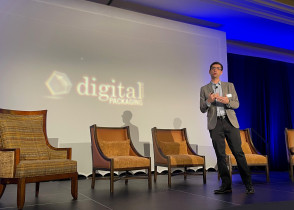 NAPCO Media Research Analyst Cory Francer started the day’s educational program with a look at how package printers are responding to a rapid influx of jobs coming into their facilities. Francer reviewed key data points, including how continued SKU proliferation impacts printers’ operations. “Eighty-four percent of respondents stated that over the past two years, the number of total versions that they’re printing has increased,” Francer said. “What really jumped out to me was that in a lot of cases, this wasn’t a small increase. Sixty-eight percent of respondents stated the total number of new versions that they were printing has increased 21-50%.”

Francer then shared data from NAPCO Research on the primary factors leading to the increase in versioning. “The top three responses weren’t necessarily surprising – an increase in work, new customers that serve diverse or expanding their customer base, as well as increased demand for existing customers.” The surprising finding in NAPCO Research’s study is that 43% of respondents stated an increase in customer awareness and use of digital printing were the primary factor driving their versioning business, which is a testament to the work that label printers have done to educate the market.

Some of the strategies that printers are using to combat the challenges and capture the opportunities that come with increased versioning. “Sixty-four percent of our respondents said that they’ve made an investment in digital or hybrid printing,” Francer reported. “Thirty-three percent of respondents stated they’ve transitioned existing work from conventional to digital, and 35% are increasing automation.” Leveraging these technologies, Francer noted, not only sets up the printing companies for success on their versioning jobs but also can help these printing companies address the labor challenges impacting nearly all employers outside the tech industry.

With Digital, Print is a Byproduct

The bar was set high for Day 2’s session, “Real Life User Experiences from Your Peers in the Trenches … .“ Kevin Karstedt, VP – packaging and labels, Keypoint Intelligence, moderated the panel, which he described as one of the highest ranked sessions from prior years.

“We really try to move the work to the right asset,” he said. “I would say that's been a challenge a little bit for us, because we have six plants and we have six ERP systems, so fundamentally that is a challenge.”

One solution Barnes and his team found was in a product from Label Traxx, which he discovered at Digital Packaging Summit four years ago. Three of his plants have been transitioned over to Label Traxx software, with the three remaining transitioning over in 2023.

George Perreria, VP of Whitebird, is no stranger to transition. He explained that Whitebird started with “a couple hybrid presses and offset printing,” but to meet customer demands, transitioned to begin selling things like mops, buckets, packaging supplies, and toilet paper.

“Everything that we could possibly hustle to meet our customer’s demands,” he said. “We transitioned that business about eight years ago into corrugate.”

After converting and manufacturing corrugated packaging, Whitebird transitioned again four years later to meet the demands of its customers again – this time with single-pass digital printing in the form of an EFI Nozomi press.

Perreria explained that when Whitebird initially brought on the Nozomi press, the company wanted to go after e-commerce packaging and to service its existing brand customers, but it found something surprising. He said that there is a large demand for digital printing in the corrugated space.

“Like any new kid in the sandbox with a new toy, everybody wants to play with you,” he said. “We found out there was a need from other converters within our region that needed help with digital printing capabilities that we brought to market. So, today, 95% of all of our corrugate digitally printed revenue is to the trade. That’s not how we intended it, but that’s how it evolved.” 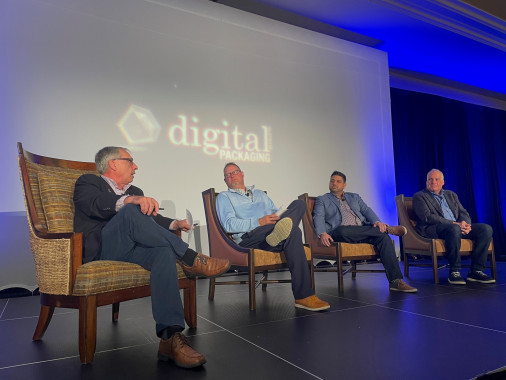 From the flexible side of the packaging world, Louis Dolgin, director corporate business development at American Packaging, described his company’s journey into digital package printing – one that wasn’t backed by a true business plan.

About five years ago, the CEO of the company bought a digital device because he had a vision that this was going to be the future of the business.

“We started with a build it and they will come model, and we discovered quickly that probably wasn’t a perfect approach,” he said.

Over time, the company has been able to chart a course to bring more digital in and is now continuing to make investments in the technology.

Growth and Opportunities on the Table

If there’s a list of education that attendees hope to gather during the Digital Packaging Summit, it wouldn't be unreasonable if strategies and opportunities for growth in the digital packaging space topped that list.

Barnes explained that Taylor Corp’s growth should come from flexible packaging and shrink sleeves, with expectations for double to triple growth over the next three years with heavy investment in assets to help drive that growth.

“We're really going at it downstream and going upstream to grow both sides the business,” he said.

With new technology comes opportunity, and Perreria seized the opportunity with a customer that was running a 250,000-300,000-sq.-ft. job on a litho press, but the customer needed the job in three days. Whitebird’s single-pass digital technology was the solution.

“The customer came to us and said, ‘Look, we're in a pinch, we don't typically use you, but is there an opportunity?’” he explained. “We quoted the job, we did the job, we converted it, turned around in three days including the diecutting.”

Not only was the customer very happy because it met its deadline with its brand, but it improved its margin.

Dolgin has a similar story of growth within digital packaging because it has brought in new opportunities, such as personalized packaging for World Cup trading cards in Latin America, which featured a different player’s face personalized on the front of the packages. Digital printing enabled easier personalization.

Finishing: Not One Size Fits All

When it comes to Taylor Corp, the company has a wide variety of finishing capabilities, but, “I’m not a believer in one size fits all when it comes to finishing,” Barnes said. “You’ve got to have the right asset for the right product you’re producing and for customer needs.”

The Industry Has Room to Grow

Karstedt closed out the panel by asking what things the industry needs to do to move into the next phase.

While Barnes began the discussion noting that Web-to-print, especially on the flexible packaging side, has room to grow, Perreria flipped the script. He asked a question to the audience to address a challenge his company is facing.

“How do you sell digital?” he asked. “A challenge we’re faced with is taking brown box sales reps and teaching them how to sell color.”

Kristine Tamblingson, VP and GM at Oliver Inc., took the mic and explained that pulling a supplier in that wanted the company to make an equipment purchase and asking them to help build a sales program to teach the team how to sell proved to be very successful.

Karstedt then turned the question of changes needed to Dolgin, who was very clear: know your strategy going into an investment decision and build an infrastructure to service it. He also pointed out that companies shouldn’t take their best press operator and put them on digital, since it’s easier to master.

“Develop skills that are easier to replace, rather than those that are well-tuned,” he said.

Karstedt closed out the panel by noting a change that he has seen over his years at the Digital Packaging Summit.

“Between the lines, I’ve heard that it’s not about printing, print is a byproduct, it’s about getting work down more effectively, efficiently, and profitably,” he said. “If we were talking five to six years ago, it was focused on print quality … print is not the issue, it’s productivity and flexibility.” 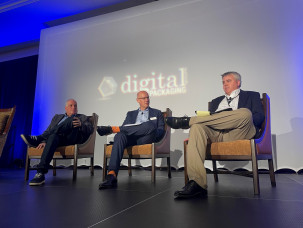 Supply chain and labor constraints have presented a sizable hurdle in the print and packaging industries, and strategies for working through these difficulties have been a recurring theme of the Digital Packaging Summit. During the first session of the day, Marco Boer, VP of I.T. Strategies, hosted a panel discussion with two flexible packaging printers to discuss the impact of these trends and how printers and converters can combat them.

Louis Dolgin, director of corporate business development for American Packaging Corp., shared how at the start of the pandemic, his company made sure to emphasize how it views its employees as family, having incorporated this message into its mission statement and core values. On the supplies side, Dolgin mentioned foil as being a top challenge in 2023, comparing the availability of aluminum to water in a water balloon, describing how there’s a finite amount of the material and if it gets squeezed into one location, it just shifts elsewhere.

“We’re sourcing from other places, but we’re all going for the same water in the water balloon,” Dolgin said.

Andrew Lischefski, core R&D global director of process development for Amcor, described how during turbulent times, business in food packaging often remains strong, but certain categories may perform better than others. For example, he said during the pandemic, wholesale business saw a decline, but retail increased.

“People were consuming more at home,” Lischefski said. “We saw certain categories increase while others decreased.”

One of the best parts of the Digital Packaging Summit happens when attendees leave the general session room. On Day 2, the afternoon was filled with small group boardroom case studies designed for interaction. Attendees were about to hear about user experiences, research, decision factors, and outcomes to help them make business decisions to drive results. 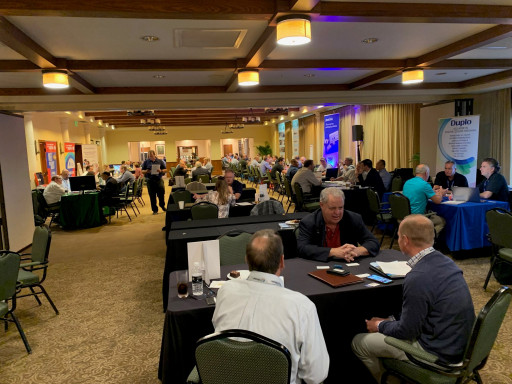 1:1 meetings are a an attendee favorite. 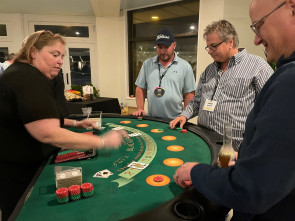 The afternoon brought about another unique aspect of the Digital Packaging Summit: the 1:1 meetings. Attendees had the opportunity to meet intimately with the industry leading solutions providers in attendance at the event.

Following the 1:1 meetings, attendees got to blow off some steam during a lively Casino Night, where the money was fake, but the prizes were very real.

Limited-Edition Oreo Packaging Is a Joy to Behold