Bridging the Physical and Digital Worlds with Packaging

In a world that is consistently going digital, packaging has been a constant presence in the physical world. And as long as there are products being produced and sold, it’s unlikely that will ever change. However, finding ways for packaging to provide a consumer with both a physical and digital experience can lead to highly beneficial opportunities for brands. On the second day of the Digital Packaging Summit, Rafi Albo, owner of SEGMARKETING, demonstrated how his company is bringing physical packaging into the digital world and the role that digital printing plays in that equation. 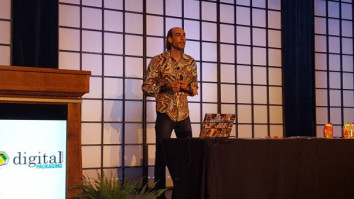 Rafi Albo of SEGMARKETING presents at the Digital Packaging Summit.

As an example, Albo highlighted kids’ shampoo. Typically, he explained, a parent purchases the shampoo bottle and its packaging is fairly generic. In some cases, digital printing can help to personalize that package, but it can be a logistical challenge for a brand to incorporate personalized labels into its product line. However, through a mobile app called Arilyn, Albo demonstrated packaging personalization in the digital world.

Albo explained that a parent can buy a shampoo bottle and send a photo of his or her child to be digitally printed onto the label. Then, when they receive the product, they can scan the label with their mobile device. In the example he showed at the Digital Packaging Summit, the character of Woody from “Toy Story” was printed on the label. A digital version of Woody then appeared on Albo’s smartphone screen, with both video and personalized audio elements.

“98-99% of labels and packaging you’re printing are not connected,” Albo explained. “It’s just substrate and finishing and a lot of glue, but it’s not connected to anything. The brands are saying we want to show the experience to our customers in real time.”

Another example that Albo demonstrated was for the beer market. In this instance, a label was printed for a beer bottle and when scanned, it depicted a video filmed inside a top nightclub. Albo explained that footage could be taken from some of the most premier nightclubs around the world and provide that exclusive experience to consumers via packaging.

“Suddenly the product becomes a canvas for storytelling for the brand,” he said.

In addition to these augmented reality experiences, Albo demonstrated the power that virtual reality can have on the packaging experience. During his presentation, he highlighted a series of labels that when scanned, can send a highly detailed, 360 degree image of a destination from around the world to a smartphone. Then, Albo demonstrated that with a pair of specially designed virtual reality glasses that have been outfitted to hold a smartphone, the user can then be virtually transported to that destination.

“Virtual reality mixed with augmented reality is changing the entire packaging industry,” Albo said. “You can use virtual reality to transport someone to a location. You can play 360 degree experiences from a piece of paper for free.”

Albo expressed that it is imperative for the package printers and converters in the industry to educate themselves on this technology, but to also ensure they are engaging their brand owner customers in conversations about how this technology can advance their messaging to the next level.

“The most important thing is that you show this stuff to your customers,” he said. “When they see this, something really interesting happens. It starts the cycle.”

Smart Packaging Has Arrived — Are You Ready?