There are certain items that should be considered requirements at any decent Super Bowl party. An adequately sized high-definition TV is obviously the top priority, but it can be safe to assume that most parties on Sunday, Feb. 5 will also feature plenty of tortilla chips, a cheesy dip, buffalo wings, and of course, beer.

That all sounds well and good, but it's that last staple item that can present a problem. Unfortunately, after the winning coach is doused in Gatorade and the confetti starts to fall, all too often, partiers who have had too much to drink end up getting behind the wheel of a car to head home. But, according to a press release from popular tortilla chip brand Tostitos, a newly designed package can alert consumers if they may be too impaired to drive.

The Tostitos Part Safe bag reveals a warning message if alcohol is detected on the user's breath. Photo: Tostitos.

The release explains that the limited edition "Party Safe" chip bags feature a sensor that a user can blow into. If the sensor detects alcohol on his or her breath, the bag will flash red, with a warning that reads “Don’t Drink and Drive.” If no alcohol is found, the bag will literally feature a green light, signaling that the consumer is good to go.

Unfortunately, according to a USA Today report, these alcohol-detecting chip bags won't be available in stores and serve solely as a marketing initiative. However, the press release states that Tostitos has partnered with Mother’s Against Drunk Driving (MADD) and Uber for a deal that can still help keep roads safe on Super Bowl Sunday while saving consumers money. According to the release, certain Tostitos packages will feature a barcode that Uber customers can use toward a $10 credit on a ride home. But act fast, Tostitos states that only the first 25,000 users to enter the last five barcode digits on eligible packages will receive the discount.

If no alcohol is detected, the user is given the green light. Photo: Tostitos.

“Our goal is to remove 25,000 cars from the roads that Sunday evening,” Jennifer Saenz, Frito-Lay chief marketing officer, said in the press release. “Whether watching the big game at a friend’s house or at a local bar, a safe ride home is just a few, easy taps away. By simply entering a participating Tostitos UPC code in the Uber app, fans nationwide can receive $10 off an Uber ride.”

Packaging Perspective: While it would have been cool to see such an innovative package in stores, it's understandable that the Tostitios "Party Safe" bag won't be available at the retail level. The company has not released much information regarding the manufacturing of these alcohol-sensing packages, but I think it's safe to assume that a wide-ranging commercial rollout would have been largely cost prohibitive. 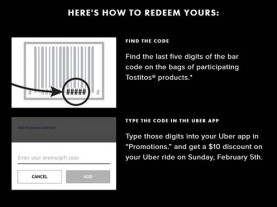 Tostitos has also released packages that consumers can use toward a discounted Uber ride on Super Bowl Sunday. Photo: Tostitos.

Still, even though it's just part of a marketing campaign, it's great to see a company garner so much attention via packaging. In addition to USA Today, Several mainstream media outlets have picked up on the story, including Time, Fortune and Adweek, to name a few.

Plus, despite the attention the alcohol-sensing bag is receiving, let's not forget that Tostitos is still creatively leveraging its packaging for the big game. By interacting directly with consumers via the barcodes on its bags, Tostitos has found a way to differentiate itself from its competition, offer added value to consumers and most importantly, incentivize users to find a safe ride home.

Both applications, while one is certainly more eye-catching than the other, are just another example of how a package can be used for much more than protecting the product inside.