Security in the packaging industry has become a front and center concern for converters and their customers, and tracking capabilities, anti-counterfeiting, and product protection are increasingly important. As these issues continue to drive packaging scrutiny, technological advancements have emerged that have allowed brand owners, retailers, and package printers and converters to fortify their products via packaging. In this article, we will review some of these technologies and their impacts on the industry.

Many consumers are familiar with track and trace methods, which are used every day by shipping entities such as UPS, FedEx, and the United States Postal Service. However, with these basic barcode systems, packages must be individually scanned during each step of the shipping process from pick-up to delivery. The data provided in these processes is also limited, as barcodes are often not suitable methods for storing highly-detailed information.

However, more modern technology such as radio-frequency identification (RFID) has emerged, and can provide a substantial amount of information in a quick and easy process. According to industry publication RFID Journal, one benefit of using this technology is its large scanning range, which can extend from a few feet to hundreds of feet. RFID can be scanned by readers, which can be handheld or affixed to a specified location. This can also be done with antennas.

Major retailers that have adopted this technology include Walmart, which according to a 2008 article in Industry Week, requires every pallet delivered to its distribution centers to be tagged with an RFID label. Utilizing this strategy, it can find specific stock more quickly and move it to the stores that need it.

One of the most damaging security breaches for brands is counterfeiting. At a time when consumer trust is essential and loyalty is difficult to earn, ending up in a situation where a consumer pays for a product that does not turn out to be authentic is a quick way to not only lose that consumer, but many others if word spreads.

One of the technologies available to printers and converters seeking to help brand owners combat counterfeiting is near field communication (NFC). This technology is again most likely familiar to many consumers, who have used it as a contactless payment process through Apple Pay, Samsung Pay, or Google Pay.

NFC tags can be implemented to labels or packages, and as explained in a February 2021 article from HowStuffWorks, consist of a chip, antenna, and in most cases, an adhesive means of application to an item. These tags, which are designed to communicate with smartphones, can then be scanned or tapped, sending product information to a consumer’s mobile device. An example of how this technology has been used to circumvent counterfeiting comes from Diageo, one of the largest global companies in the spirits industry.

In February 2015, it was announced that Diageo had collaborated with Thinfilm, a producer of NFC technology, to implement NFC tags into bottles of Johnnie Walker Blue Label, which is widely recognized as a premium offering in the blended Scotch whisky category. One of the enhancements that these tags offered, is the ability to track the bottle as it moves through the supply chain, along with its ability to detect if the factory seal has been opened. Beyond these security measures, the NFC tags also enhance the consumer experience by providing personalized and targeted communications to consumers who scan the tags with their smart phones.

Other anti-counterfeiting measures that printers and converters can help implement include holograms and invisible ink. One example of holographic security elements that was reported on by Packaging Impressions last year comes from Magnachem, a pharmaceutical company based in the Dominican Republic. When Magnachem was releasing Broncochem, an over-the-counter cough medicine, it wanted to stem counterfeiting through the use of a holographic sticker. 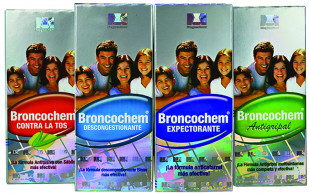 However, the sticker proved to not be a strong enough deterrent, and counterfeiters were still able to replicate the packaging. To solve this problem, Padilla, Magnachem’s printer, worked with AR Metallizing to implement holographic board directly into the package, making counterfeiting far more challenging, and adding a distinct visual appeal to the folding carton.

In addition to product diversion and counterfeiting, packaging security enhancements can protect products from damage or spoilage. Sensors that can be affixed to packaging can help this cause, and can even indicate if a product that requires storage at a certain temperature has been exposed to potentially harmful conditions.

One example of these types of sensors comes from Tempix, a Swedish company, which has implemented its sensors onto food and pharmaceutical packaging. As reported in a January 2014 article in Packaging Digest, the Tempix sensor will destroy the barcode on a package by releasing a liquid over the barcode if the temperature gets too high. This renders the product unscannable, which then keeps it out of consumers’ hands.

In the shipping process, FedEx utilizes its own system that uses Bluetooth Low Energy (BLE) to WiFi to establish a network. From there, notifications on packages are given at regular intervals, including the temperature of packages, which is vital when shipping medications that must be at specified temperatures.