Packaging is hardly foreign to TEAM Concept, a provider of commercial print, signage, and mailing services in Carol Stream, Ill. But with a physical expansion and equipment investment in the works, packaging production will soon be ramping up at the 22-year-old company. 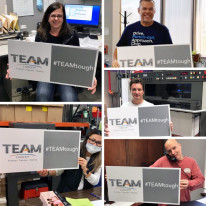 TEAM Concept has launched the #TEAMtough campaign, highlighting how the COVID-19 situation is bringing out the company's toughness.

What began in 1998 as a printing operation focused primarily on business cards and stationery products, will be home to a new 40” Komori offset press and will be expanding to an approximate total footprint of 60,000 sq. ft. While the upcoming expansion is exciting for President and CEO Tony Rouse and his team, it marks the latest endeavor in a pattern of strategic growth throughout the life of the company. Since its founding, Rouse explains TEAM Concept has consistently sought new opportunities to explore and the latest equipment to best serve its customers.

For example, after starting out solely producing two-color offset work with a specialty in thermography, Rouse says TEAM Concept eventually evolved into four-color printing at the request of its customers. Then, it moved into digital production, adding equipment from HP Indigo, Xerox, and MGI, while also expanding into the packaging space.

Rouse explains that while TEAM Concept can produce a variety of packaging products — which currently accounts for 20% of its total sales — one of its specialties is high-end folding cartons for fragrances, candles, and similar household products. But with packaging demand increasing, Rouse says the company made the decision to ramp up capacity and go full speed ahead into packaging.

“As we keep getting these opportunities put in front of us, that’s when we decided, ‘You know what – let’s get into it,’” he says. “’Let’s get some big diecutting and converting equipment and some big press equipment so we can answer the bell on [packaging].’”

Like many commercial printers, Rouse says that TEAM Concept serves a variety of customers that have a need for packaging. But because the company’s presses were half-size and its converting equipment had certain limitations, it was not able to take on all of its customers’ packaging requests.

“It’s just a natural fit,” he says. “We have the ability, the personnel and all of the other infrastructure in place to do it.”

As far as the infrastructure is concerned, the new Komori GL640 on its way to TEAM Concept will be outfitted with LED curing and an in-line closed loop densitometer — the first of its kind in the United States. Rouse says that was an important selling point on the press, as it provides consistent monitoring and leveling of the print.

Additionally, with its six-color configuration and a plastics package, the press will provide additional flexibility to TEAM Concept in the types and thicknesses of packaging it can produce. Rouse explains that in addition to folding cartons, TEAM Concept has experience in corrugated, and can produce short runs of boxes using its current large format equipment and digital cutter from Zünd.

“That’s how we built the company,” Rouse says. “We started doing large format and started doing [other services.] We started out small and really ramped up as the demand came and we’re at that position now. We already did a good solid amount of packaging, but just in a smaller format – either smaller quantities or sizes and that’s why we wanted to be able to expand up so we’re able to do a lot more.”

While the coronavirus pandemic has added some challenges to expansion plans, Rouse says TEAM Concept has stood firm in its belief that the time is still right to take on this growth initiative. With packaging demand still strong, he says the company feels confident in its ability to move forward with its plan.

“This current climate has been tough,” Rouse says. “It’s not quite what we were envisioning as far as rocking into it happening, but we decided we’re going to stay the course and keep moving forward as planned.”