A Sweet Victory for this Year's Best of Show Winner

It took 15 drawdowns to find it, but once the deep red band stretching across the package looked just right, the project was set up for success.

Hershey’s was on the hunt for a new packaging format for its iconic Special Dark Nuggets with Almonds. Specifically, the goal was to develop a stand-up pouch that elevated the product’s appearance as a high-end, luxury item. Not only did this require the correct shade of red, the color also needed a metallic appearance, to go along with Hershey’s Munsell maroon brand color, multiple gold elements, and photorealistic images. 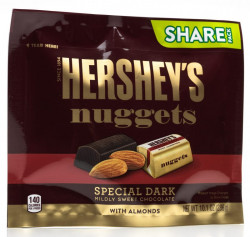 With a long-standing relationship already in place, Hershey turned to American Packaging Corp. for the job. Because the pouch would require a heavy ink laydown and crisp graphics, American Packaging’s Comexi rotogravure press, located in the company’s DeForest, Wis. facility, proved to be a perfect match. For Tim Rivers, graphics manager for American Packaging Corp., seeing how well the final product stands out in the crowded candy aisle reiterates just how strong the printing of the pouch is.

“You start realizing how the color we’re putting on these packages is really affecting the consumer in the end,” Rivers says. “It’s grabbing their attention. I love the detail in the almonds more than anything. I really feel like I could pull an almond out and lay it next to [the pouch] and you couldn’t tell much of a difference between the print and almond.”

Not only does the pouch appeal to consumers, it also stood out to the judging panel of the 33rd annual Packaging Impressions Excellence Awards. The pouch was honored as Best of Show out of nearly 200 total entries, and also received first place recognition in the Flexible Packaging – Gravure category.

Bill Enright, senior application engineer for Mark Andy, and a six-time Excellence Awards judge, states the combination of attributes that were extremely well done on the pouch were what made it a candidate for Best of Show.

While American Packaging Corp. was able to produce a stunning final product, the path to success required a strong team effort. Melinda Lacke, graphics coordinator for American Packaging, explains that in addition to collaborating with Hershey’s, American Packaging worked hand in hand with Trident, which provided the engravings, and Phototype, which produces the art separations for Hershey’s.

Lacke says that one of the challenges of the project was that it was produced with 10 colors, meaning that every deck in the press had a color in it. It was essential, she explains, that as these colors were being laid down, that overlaps were avoided. For example, Lacke states that if the Munsell maroon was printed on top of the red banner at all, it wouldn’t have the opacity to cover it entirely and the color would become distorted.

“Trident was amazing working with us and trying to come up with the best print sequence to make sure everything fell into place nicely,” Lacke says. “They actually engraved cylinders as kind of a drum proof trial at their facility to make sure it was all laying down and give us the best chance of success.”

Rivers explains that Munsell maroon has a reputation of being a challenging color to reproduce, especially with any level of consistency. But, he says with this job, the entire supply chain was able to collaborate to ensure the iconic Hershey’s color could be executed with both quality and consistency.

Another key area where precision in printing was essential was in the gold elements of the package. Lacke explains that it was imperative for the gold to be as clean as possible, and if there was overlap with the Munsell maroon, it would have impacted the vividness of the gold.

This was critically important in the “With Almonds” text and net weight information within the gold bar across the bottom of the package. Rather than overprinting the gold with Munsell maroon, Lacke explains that the shapes of the letters were knocked out of the gold and filled in with maroon.

But what Lacke says makes her most proud about this particular piece is how well the final result captured the distinct red that has so long been associated with Hershey’s Special Dark products. Adding in the metallic attributes, she explains, is what takes this new package format to another level.

“If you think about Hershey’s Special Dark, that red that you’re used to seeing on Hershey’s packaging is really captured very well in this piece,” she says. “I’m really happy with how that turned out and how we were able to put that subtle bit of metallic in and really elevate that look.”