It was right around 2013 when the team at Wingate Packaging saw the changes begin to take shape. The Cincinnati-based company had just started production in a new facility in Washington Court House, Ohio, and run lengths were consistently tracking at high volumes. But every year since, Chris Kline, GM of Wingate Packaging, says those run lengths have dropped, even though the customers have stayed the same.

Wingate, which was founded in 1983, had always relied on a variety of conventional printing and finishing equipment to churn out the company’s diverse packaging portfolio, which spans multiple market segments, including a specialty in meat packaging. But as the company saw these run lengths continue to get smaller, Kline says it was time to investigate not just digital printing, but an end-to-end digital process that included finishing and converting as well.

In October of 2019, Wingate made the leap into digital production, installing an HP Indigo 30000 digital press, along with a Highcon Euclid IIIS digital cutting and creasing machine.

“Customers are looking for expanded SKUs and shorter lead times,” Kline says. “As those run lengths shrunk, the digital market made more sense.”

As run lengths continue to trend downward across the packaging industry, adoption of digital printing technology has been a logical response for printers to take. But packaging production is a multi-step process, and while digital printing is an efficient process for short runs, finishing and converting those runs on equipment designed for high volumes can lead to production bottlenecks. For companies like Wingate Packaging, addressing short run finishing needs allows for an ideal setup to efficiently tackle the demands of today’s brand owners.

While maintaining the right equipment to properly finish and convert printed packaging is a significant component of ensuring efficient production, without systems in place to send work to the right machines, that production speed can quickly break down as changeovers mount up.

Kelly Wall, senior director of quality and continuous improvement at C-P Flexible Packaging, says that smart scheduling in printing and finishing has been a major factor in the company’s ability to maintain an efficient workflow with limited interruptions. As a producer of a variety of flexible packaging products across multiple facilities spanning York, Pa., Bristol, Pa., and Buffalo, N.Y., along with the recently acquired Genpak Flexible facilities in Lakeville, Minn. and Aurora, Ontario, Wall says that C-P has not seen a drastic increase in short-run work, but the company has been impacted by reduced run lengths interspersed with its high-volume production.

To reduce production slowdowns that are inevitable with frequent changeovers, Wall says C-P consecutively schedules short runs of printed material to be finished, eliminating the need for a complete changeover between jobs.

“What we’ll do is if there’s a large batch of small runs that are ready for finishing, we’ll schedule them back to back to back with line clearances in between, but it doesn’t require the equipment to be changed over if the roll is the same size,” she says. “We do a lot of different jobs that are different material, but are the same size. So what we’ll do is we’ll actually schedule those so we continue to run efficiently and it prevents all of the changeovers, while still meeting customer timelines.”

In addition to smart scheduling on a daily basis, Wall says C-P has emphasized standardization practices across its three locations, which both ensures efficiency in production, and consistency of output. Because the three locations share many of the same customers, Wall explains it is imperative that brands can expect the same quality of production and turnaround times, regardless of which facility is running their work.

To achieve this consistency, Wall says C-P Flexible Packaging assessed where it could implement automation and common production settings. She explains that each of the company’s three sites uses the same automated color control system, along with consistency in production speeds, tension controls, and more. This process has also included maintaining similar equipment in each location, such as two of the same slitters the company invested in, which were installed in the Bristol and York facilities. But one of the most important parts of the process, Wall says, is ensuring that a variety of opinions are being heard.

“We have just completed our whole standardization across all of our sites, such as recipes, process controls, how we set up the machine, what quality and process inspections that we do, what finishing inspections that we do, and operating parameters,” she says. “When we do a continuous improvement project, it’s not just the management team. It’s a variety of team members including operators and quality control technicians. At C-P, everyone has a voice.” 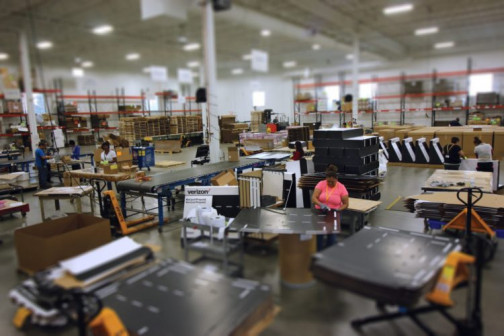 Beyond speed and efficiency implications however, selecting the equipment needed to produce a job can also be a question of cost. Chris Dillon, VP of operations for Meyers, a Minneapolis-based printer of a variety of labels, packaging, and displays, explains that the company’s estimating and project management departments place a strong focus on ensuring the jobs that flow through the facility are sent in the most cost-effective path, while maintaining the customer’s expectations.

Because Meyers’s product portfolio spans labels, folding cartons, corrugated, signage, and more, the company maintains a large fleet of equipment, which includes both conventional and digital technologies. On the conventional print side, the Meyers fleet includes three offset presses in 40˝, 64˝, and 81˝ formats, and seven traditional flexographic presses. But Meyers has also been a strong proponent of digital, with a Durst Rho P10 250 and Inca Onset X3 on the large-format side, along with an HP Indigo WS6600 and a hybrid MPS EF Symjet Powered by Domino in the label department.

The conventional and digital combination also extends to Meyers’s finishing department, Dillon says, as the company maintains five conventional diecutters, along with three CAD tables — two from Zünd and one Kongsberg.

With a varied product mix and multiple run lengths to contend with, Dillon explains that having a large selection of equipment at the company’s fingertips helps keep production costs down for customers, while also allowing the company to select the equipment best suited for maintaining an efficient workflow.

“There’s a makeready cost that’s associated with the analog way — the traditional diecutting, litho or flexo print way of doing things,” Dillon says. “And what’s the cost of that makeready? And on the flipside of that for digital, what’s the additional cost of the ink? At some point it catches up to you. Depending on what material you’re printing on, it can be kind of a moving target.”

While decreasing run lengths play a major role in the importance of finishing efficiency, the increasing importance of speed to market is another significant component. Particularly in the flexible packaging segment, regardless of the efficiency of the print process, the curing and converting procedures can lead to a production slow down.

According to Raul Matos, VP of sales and marketing for Karlville, a supplier of a variety of packaging and converting equipment, thermal lamination is a key component of reducing the turnaround times for flexible packaging production. This technology, he explains, is at the core of HP Indigo Pack Ready, a platform launched at drupa 2016 resulting from a partnership between HP Indigo and Karlville.

With the HP Indigo 20000 digital press hitting the market for digital printing of flexible packaging, converters were in need of a laminating system that allowed them to quickly turn the printed material into pouches, maintaining the efficiency gains they were realizing in printing all the way through the finishing and converting process.

“HP Indigo had the best vision for short-run strategy,” Matos says. “Pack Ready has been an extremely successful project with a laminator install approximately every three months over the last four years in multiple countries globally. Pack Ready has allowed label converters with no previous experience to start up in flexible packaging. Most installs are self-sufficient within the first two weeks of install. This is unheard of in the industry for startups. Given the success of the product, and partnership with HP Indigo, we designed a pouch machine to complement the laminator for short runs. With 30 minutes changeovers versus the standard one to two hour changeover, the pouch machine adds value to the entire proposition.”

“Most of our opportunities have turned for COMBI because of an excellent value proposition,” Matos says. “As a dual technology machine, the COMBI will allow further growth and disruption for label converters and greenfields to gain market share of the large flexible packaging market.”

The efficiency and cost effectiveness for short runs that digital finishing provides has also opened opportunities for test-run and sample printing that would not have been feasible with conventional equipment. For example, Ed Rodden, CEO of Wingate Packaging, says that since the company has installed its HP Indigo digital press and Highcon Euclid IIIS, it has been able to supplement its business with high-quality packaging sample production.

Rodden says that Wingate has launched what it has dubbed its First Article Program, in which any company, regardless if it is an existing Wingate customer, can have samples printed on the digital press and finished on the Highcon. This, he says, provides an accurate representation of what a final product would look like when moved into larger scale production.

“If you’re a marketing person and need samples for a presentation, come to us and we can turn it around,” Rodden says.

At Meyers, Dillon explains that beyond the commitment to a diverse set of equipment, having the right software solutions in place has been important in maintaining efficiency in production. He says that about five years ago, Meyers was on the hunt for a new MIS system, but the issue the company was running into, was that the solutions available on the market were designed to be universal, and didn’t quite fit the company’s specific needs. Dillon says Meyers opted to go the customized route, and created its own MIS, tailormade for the company’s unique attributes.

Matos says he expects to see the trends driving an increased need for efficiency continuing to impact package printers as customers get accustomed to quick turnaround times and deliveries. While SKU proliferation and limited-edition products continue to drive short runs, Matos explains that package printers who can reduce lead times and get results to customers quicker will be at an advantage.

“If you’re a large player and you make [pouches] and you have 10 weeks lead time … you print, you laminate, then you put it on a truck, you haul it across the country to get converted, you wait, and you get your pouches back in five weeks,” he says. “That’s the opportunity. With brand owners, it’s just like Amazon, they’re just not waiting.”

Superior Lithographic Invests in Folder/Gluer and Packer Solution from PPCTS

The ETI Advantage for Linerless Labels