State of the Industry: Labels

It’s a positive and profitable environment for label producers who can adapt, but not for those resistant to creative experimentation or new production technologies.

One hundred or 1,000 years from now, historians trying to make sense of the present day will find some of their most revealing clues in the packaging and labels we’ve left behind. They’ll see labels, especially, as symbol-rich sticky notes that subtly document major shifts in demographics and social behavior. Whether they realize it or not, the label producers of today are hard at work creating primary sources for the cultural researchers of tomorrow.

What they do know is that they’re manufacturing high-value printed matter that promotes brands, sells consumer and industrial goods, facilitates regulatory compliance and represents one of the few print market segments with assured growth ahead of it. The state of the label industry, as outlined by the five expert observers interviewed for this report, is as dynamic as the trends now redefining the look and the functionality of the labels themselves.

It’s a positive and profitable environment for label producers who can adapt to it, but not for those resistant to creative experimentation or new production technologies. Falling behind the pace of change in the label market, the experts agree, is a risk that no producer can afford to take. 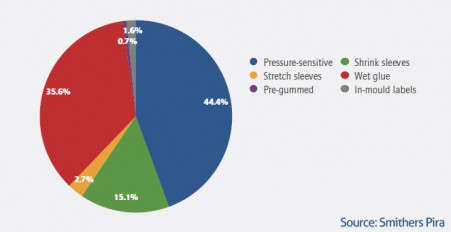 Labels go on packages containing products intended for people — and people, as consumers, don’t fit as neatly into traditional marketing models as they used to. Today’s consumer population consists of “many more households with many fewer people in them,” says Sean Smyth, a consultant with Smithers Pira. That spells market fragmentation, and fragmentation brings changes in pack sizes, types, materials and quantities that have commensurate effects on the demand for labels.

Not only are consumers becoming more diversified in their living arrangements, they’re also skewing younger. These shoppers, says Bob Leahey, an associate director at InfoTrends, have grown up with mobile technology and want labels that they can use their smart phones to interact with.

“Labels are being designed accordingly,” he says, with visible or covert codes that can be scanned as gateways to electronically delivered content.

What consumers of all ages want most is choice, according to Dan Muenzer, the former VP of marketing for Constantia Flexibles, who became president of TLMI, the label industry’s principal trade association, on July 1. He says brands expect labels to foster consumer engagement with the increased number of choices they’re offering, either with touches as simple as “funky graphics” or with multichannel enhancements like smartphone-enabled augmented reality (AR).

Smyth says he “gets wowed all the time” by creative innovation in the digitalized makeover of prime labels for consumer products, mentioning the Evian “Live Young” campaign as a telling example of brand evangelism via labeling.

Codes embedded in hundreds of millions of labels on the water bottles let Snapchat users project their faces onto the virtual image of a dancing baby (babies are a key visual element of the “Live Young” story line). Muenzer admires what Heineken has done with the Blippar AR mobile app, which delivers a sustainability message about beer ingredients when drinkers use the app to scan the label.

When in Doubt, Regulate

Advancements like these give labels fresh relevance as brand marketing vehicles, but they don’t take place in a vacuum. Often, what consumers see on labels is there because a government regulation says it has to be there — and these mandates never get easier for label producers to stay ahead of.

As corporate prepress and color manager for Cybergraphics, Kevin Borquin tracks regulatory trends that could change the nature of the work the flexo packaging services company does for its brand-owning customers. The two most significant sets of federal regulations, he says, are those for updating the Nutrition Facts Label and for disclosing the presence of genetically modified organisms (GMOs) in food.

Implementation of the Nutrition Facts Label changes, which originally was to begin in July 2018, has been delayed indefinitely, and the similarly timed GMO labeling requirements could be postponed as well. That’s a setback, says Borquin, for brand owners who had hoped to make all the changes at once. It also breeds uncertainty for label producers, who must be ready to handle a rush for compliance when the deadlines finally do become clear.

Some customers need up to 18 months to roll out new packaging and label designs. That’s not a problem for label producers as long as the work is well planned and managed. “But if we wait until the last minute,” Borquin says, “it’s hard.”

As markets fragment, SKUs proliferate, creative possibilities explode, rules convolute, run lengths shorten and turnaround windows shrink, the structure of the label industry was bound to change, and in some ways, it has. Muenzer, for example, says that some label producers are branching into flexible packaging because they see it as a complementary opportunity.

Kevin Karstedt, principal of Karstedt Partners, says that while the label segment hasn’t seen the kind of consolidation that the folding carton, flexible and corrugated packaging segments have experienced, the top 20 label producers are using acquisitions to increase their combined share of the total market. Owners of label companies in the $20 million to $30 million range who want to take to take advantage of the trend are “working very hard to make their businesses buyable” by the largest players, according to Karstedt.

He also notes greater movement toward do-it-yourself production among specifiers of labels for industrial products. These customers have found that they can turn out batches of the labels they need on compact, inexpensive equipment that lets them add splashes of color to zebra barcodes and other mundane graphics. Similarly, Leahey sees the industrial label market as one where decentralized printing on “many millions” of monochrome devices is ripe for color from desktop systems.

The most noticeable result of changes in demand on the manufacture of labels is decreased run lengths in some product categories. Small-quantity production by the thousands of craft breweries now operating in the U.S., for example, means label orders in correspondingly small batches from these customers.

This is helping to drive label production to digital printing equipment, which is more economical than flexo or offset lithographic presses for short runs. Karstedt says that 2016 was a tipping point where for the first time, digital label systems outsold conventional hardware for label printing and converting. Label service providers are getting better not just at using but at marketing their digital capabilities, according to Leahey, who sees digital as a “welcome complement” to analog label production.

Digital printing, however, accounts for only a single-digit percentage of all label production. Karstedt points out that as digital continues to make its incremental gains, “the analog guys haven’t been sitting still.” Smyth agrees, noting that traditional flexography has greatly improved in both print quality and mechanical efficiency.

Flexo equipment manufacturers such as Gallus, Nilpeter, and Mark Andy have been “dynamic and creative” in their responses to changing label market demands, according to Leahey. The flexo vendors have embraced digital either by building inkjet label presses or by hybridizing flexo equipment with inkjet printing. Muenzer foresees a “huge expansion” of hybrid label production on devices that can finish as well as print.

Given the fluid state of the label industry, printers and converters face some difficult choices about investing to take full advantage of it. And although picking the best press often is, as Smyth puts it, “the rock star decision” in printers’ spending plans, it isn’t the one that counts most toward success in the label business as it stands now.

“The days of having a secret piece of equipment that your competitors don’t have is over,” Muenzer says, adding that customers wouldn’t care anyway. “They are specifying a graphic, not a process. Nobody tells you, ‘I want this digital.’ They tell you what they want the label to look like.” This means having a technology-agnostic mindset along with multiple options for getting the job done, whether the printer provides all the necessary services or sources some of them from partners.

If it isn’t the press, what is it? Workflow, insists Smyth. “Printing is generally the easy bit,” he says. “The infrastructure you need to make your press successful — never underestimate the importance of that.”

End-to-end workflow is crucial, Leahey agrees, because when there are more jobs to keep track of, there is “more stress on your processes from press to finishing.”

Ease stress with automation, Karstedt urges: “Look for your weak links, and automate there.”

In Muenzer’s view, the most important investment that label producers — especially small ones — can make is in people. Every label shop, he says, needs specialists who can leverage solutions available now and keep tabs on those on the way. The label industry, Smyth agrees, could be doing a better job of preparing its people for the automated, low touch/no touch production routines that will not be long in arriving.

Labelexpo Shifts Events to 2022, Will Host New US Label Congress in September 2021