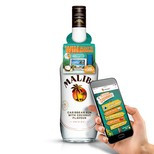 Although much of the hype surrounding the rise of technologies in package printing and converting has been centered on digital printing, it has felt like there has been another technology in the back of the industry’s collective mind, but has not received the same attention.

Smart packaging has certainly created some buzz, but perhaps not to a huge degree, as it has not been rolled out on a major scale, and many developments have been conceptual in nature. Over the past few months, packagePRINTING has reported on developments in RFID, interactive screens that could be added to packaging, and we’ve even received news of near field communication (NFC) technology that connects consumers to a craft beer delivery service.

But until now, we really haven't seen a substantial rollout of smart packaging incorporated into an internationally recognized brand. Earlier this month, Pernod Ricard UK announced that 40,000 bottles of Malibu rum would be released exclusively to Tesco, the UK’s largest retailer, featuring NFC technology as part of the brand's #Becausesummer campaign.

According to a press release issued by Pernod Ricard UK, all that is required of consumers to use this technology is to tap their smartphone on the bottle to immediately view Malibu-branded content and contest entries.

In a March press release issued by industry analyst firm Smithers Pira, David Platt, the author of a Smithers Pira report on the topic, states that one of the major reasons smart packaging hasn’t taken off on a large scale is primarily due to cost inhibitions. However, Platt goes on to explain that manufacturers are reducing their unit costs and improving smart packaging functionality.

The Pernod Ricard release states that the Malibu initiative is the world's largest implementation of NFC into an alcoholic beverage product. To develop the campaign, the release explains Malibu worked with SharpEnd, a London-based creative agency. Through the technology, the release says consumers will be able to enter competitions and win prizes.

Additionally, consumers are encouraged to provide their own content by uploading a summer-themed photo. The release explains that Google’s Cloud Vision API can then automatically classify the photo into a theme like "barbecue" or "beach," and send a branded photo back to the consumer.

The release goes on to say that the technology can also provide drink recipes, directions to nearby bars and can provide a playlist of music.

At the start of 2016, it would have been a stretch to expect that smart packaging would become a mainstream technology. In fact, when packagePRINTING spoke with David Luttenberger, global packaging director for the Mintel Group at the start of the year, he explained that the technology is not at a point where it will be implemented throughout the grocery store. But as long as it delivers “contextually relevant” information and provides a value-add to the consumer, smart packaging can be instituted incrementally into the market.

Seeing a major, international brand like Malibu rum incorporate NFC technology is an encouraging sign and will position the brand at the head of the pack when it comes to consumer engagement. Hopefully, if this initiative catches on in Europe, we’ll be able to have some fun with it stateside.

Smart Packaging Has Arrived — Are You Ready?