Highcon Set to Take Corrugated to New Heights at drupa 2020

It was a near impossibility to miss the Highcon booth during drupa 2016. Complete with elaborate sculptures built from corrugated board, and folding cartons designed with intricate laser diecuts, the booth was a clear testament to the potential of paper and the power of digital finishing and converting.

Now with drupa 2020 mere months away, Highcon has brought a renewed focus to the folding carton and corrugated segments. In a recent briefing with Packaging Impressions, Highcon executives detailed multiple new solutions they say will not only advance the creative potential of converting, but will also increase production efficiency. 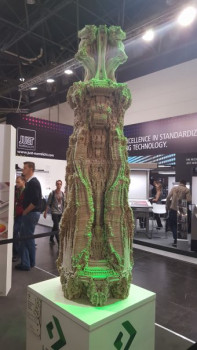 Highcon's booth at drupa 2016 was a testament to the power of paper. Here, a sculpture made from corrugated board is displayed in the booth.

According to Shlomo Nimrodi, CEO of Highcon, since the company’s big splash in 2016, Highcon has been working on enhancing its product portfolio, while also expanding its footprint in corrugated with the launch of the Euclid IIIC digital cutting and creasing machine.

With multiple orders of the Euclid IIIC complete — including two at leading corrugated sheetfeeder Corrugated Synergies International — Nimrodi said 2020 will see even further growth for Highcon in the corrugated segment.

One of the focal points of the company’s booth at the upcoming expo will be the Beam 2C, a digital cutting and creasing platform that utilizes a non-crush system, resulting in a stronger final product. While drupa will be the first opportunity for many attendees to see the Beam 2C, Nimrodi explains that during 2019, Highcon launched the product “under the radar screen,” with multiple installations.

The installations included Australia-based Orora Fibre Packaging, and THIMM Group, based in Northeim, Germany. Nimrodi explains that the key drivers for these companies to invest in the new platform include increased pressure from brand owners for quick turnarounds on shorter runs.

This trend, which has emerged across all segments of packaging, has been a key component to the rise of digital printing. Pairing digital print with digital finishing is a logical decision to make, as it allows converters to maintain efficiency advantages throughout the process, Nimrodi said. At Orora, he said the Beam 2C is positioned near an EFI Nozomi C18000 digital press, and at THIMM, the Beam 2C is next to a digital corrugated press from Durst.

“If a company invests in digital print, it makes sense to complete the strategy in digital finishing,” he said.

Another important advantage of the Beam 2C — along with the Euclid 5, which Highcon will also be showcasing at drupa — is the durability the non-crush cutting process provides, Nimrodi says. In a traditional process, he explains that the knives crush the substrate, which reduces the strength of the box. However, in a non-contact laser cutting process, the integrity of the box from a durability perspective is significantly less compromised. As a result, Nimrodi says a corrugated box finished on the Beam 2C can achieve the same mechanical strength as a conventionally finished box at 20% to 30% less paper thickness.

In addition to the efficiency and durability advantages digital finishing provides, Nimrodi explains that it also provides an element of flexibility that brands and converters had not been able to take advantage of before. As Highcon continues to educate its customers about what they can accomplish with the technology, the company is also reaching out to brand owners to explain how they can benefit as well.

“It’s not a process of six months to change a package,” Nimrodi says. “You can do it fast. This is an element [brands] don’t know and we have to work in parallel with our customers.”

Alon Bar-Shany Appointed to Chairman of Highcon Board of Directors