Consumers, brands, products, and packaging are becoming increasingly connected, aided by the use of 5 billion smartphones worldwide, Mattias Byström, president of Esko, said in his opening address at EskoWorld on June 24.

With a theme of “Packaging Connected,” it was an appropriate way to open the 28th edition of EskoWorld, which focused largely on fostering synergies throughout the packaging supply chain. This is especially important, Byström explained, due to the inherent trust that consumers place in packaging, citing a recent survey of shoppers, in which 71% stated they trust the information they see on packaging.

Preserving this trust is an important responsibility, Byström explained, and it requires packaging of the highest quality.

“Trust is about safeguarding quality,” he said. “We will protect the work you do every day with our software.”

Over the course of the three-day event, held June 24-26 at the Gaylord Opryland Resort & Convention Center in Nashville, Tenn., the more than 550 attendees (an EskoWorld record), connected with each other, learning together about the latest in Esko technology and best practices for producing high-quality packaging, efficiently and effectively.

Though the importance of packaging to brands and consumers was a key theme throughout the event, it was mentioned on multiple occasions that packaging can be a “dangerous” industry to be in. With ever-evolving regulations to monitor, environmental factors to consider, and the importance of accuracy and quality, the pressure on packaging professionals is high. But, as Danielle Sauvé, Esko’s VP of marketing explained, a key component of Esko’s mission is to help “packaging heroes” work through these challenges.

The company's overall mission, she explained, is to "build trust in packaging from design to delivery on a global scale." This includes fostering connection among members throughout the packaging value chain, where Esko solutions can be found in several stages.

Sauvé explained that more than half a million packaging professionals around the world use Esko’s tools for essential tasks, such as reducing errors, improving communication and staying at the forefront of evolving industry trends.

The event highlighted some of the latest Esko tools for the packaging industry, including the Kongsberg C Edge digital cutting table, the Print Control Wizard software solution for the flexo industry, and ArtPro+, a software solution that turns ArtPro or normalized PDF files into a native PDF.

The Kongsberg C Edge, Sauvé said, is a digital cutting table that can be upgraded over time, allowing companies that are starting out to bring a Kongsberg table on board at an affordable price, and expand the table's capabilities as the company grows. For the corrugated segment, a heavy-duty unit can be applied to the table, which provides a 50kg down force, implementing quality crease lines with a 150mm crease wheel, Esko stated in a press release. The release also states that through the use of CorruSpeed, corrugated board can be cut at production speeds without oscillation.

On the flexo side, Esko’s Print Control Wizard has already garnered a great deal of recognition in the industry, winning a Technical Innovation Award from the Flexographic Technical Association, and being placed on the shortlist for the Award for Innovation at the Label Industry Global Awards.

The software, which according to a release from Esko, is designed “to simplify the implementation of screens and dot gain curves in the reprographics process,” will also be beneficial for companies bringing new substrates on board, Sauvé added. 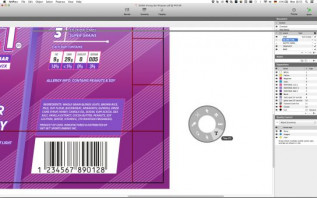 ArtPro+ is a software solution that turns ArtPro or normalized PDF files into a native PDF.

On the prepress side, the release of ArtPro+ is a response to the rise of PDF in the packaging industry. According to a release, ArtPro+ will turn an ArtPro or normalized PDF file into native PDF. This allows for a variety of metadata, including barcode, screening, and ink information to be brought into up-to-date PDF ISO specifications, the release states.

Because Esko has solutions that impact the entirety of the packaging supply chain, Byström explained there are “packaging heroes” in all aspects of the industry using Esko products. During his keynote, he highlighted five of these heroes, demonstrating how, even though they are all from different companies and perform different jobs, the connection they share is through their use of Esko tools to assist them in their daily tasks.

Byström specifically mentioned Frank Goddiess of Colgate-Palmolive as a brand leader hero, Angela Clinefelter of Kimberly Clark as a design manager hero, Scott Harris of Bennett Packaging as a structural design hero, Bill Lawrence of SGS as a prepress specialist hero, and Marybeth Foss of Fortis Solutions Group as a prepress leader hero.

“Each one of these heroes has a few things in common,” Byström said. “They're constantly under pressure, but they’re able to mitigate that. They can decimate errors. They can defy time. They can conquer communication. And they can adapt to new substrates and inks.”

How a Classic Card Game Leverages Packaging for a Fresh Look

How This New Coffee Brand Engages Consumers with Corrugated

Morton Salt Redesigns an Iconic Package with an AR Twist