Inspired by the nostalgia of post-hunt hangs,  Lone Star Beer and specialty retailer Duck Camp celebrate the start of the Fall hunting season with limited-edition packaging in Duck Camp camo, a capsule merch collection, and a tailgate event series at select locations of the hunting-focused retailer. The brands leaned hard into the 80’s time capsule theme with multiple print vehicles including 80's Texas Outdoors inspired hats, T-shirts, and custom beer koozies so the Lone Star is cold and accessible after the hunt. Because Lone Star has always valued the brand equity of its packaging, which is strongly connected with the beer brand’s history, its beer cans feel right at home in the 80s collection. All of this is kitted into printed packaging with both the Lone Star logo and Duck Camp’s district camo pattern. 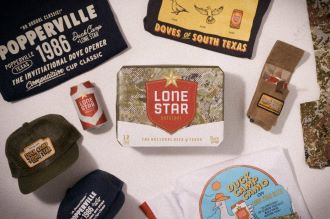 "As two brands rooted in camaraderie, we really wanted to lean into the nostalgia that the return of the season brings - memories of post-hunt hangs with friends and family," said Duck Camp VP of marketing Grant Watson in a written statement.

The campaign, in partnership with creative agency Easy Pete's, follows an unsuspecting dove hunter, Braxton, and his friends as they frolic through the brush with their Duck Camp camo-laced Lone Star packaging.

The storyline is classic Texas, and that’s not an accident. In a written statement, Lone Star Beer brand director Daniel Crawford remarked, “After an exciting year of using their Midland Camo on our packaging during hunting season, we wanted to go bigger this year with a campaign rooted in the lore of 80's Texas Outdoors.” We’ll leave out Crawford’s comment about being the National Beer of Texas because the status of Texas as a sovereign nation is debatable — although it makes a great brand tagline.