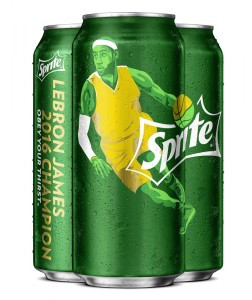 It only took 52 years, but Cleveland has a championship team to celebrate again — not to mention the only recovery from a 3-1 deficit in NBA Finals history — when the Cleveland Cavaliers beat the Golden State Warriors in a 93-89 victory in game 7 on Sunday.

Under the campaign title, "Dap the King," Sprite will be releasing limited edition soda cans adorned with series MVP LeBron James. The term "Dap" which according to Urban Dictionary, means "the knocking of fists together as a greeting, or form of respect," is being used to pay homage to the various handshakes shared between the basketball legend and his teammates throughout the season.

The social media campaign will encourage fans to upload videos of "themselves performing celebratory LeBron-style handshakes with fellow fans and post on social media using the hashtag #DapTheKing and tagging @Sprite," according to a press release. Unfortunately, Cavs fans outside of the Buckeye State might not be able to get their hands on the limited release cans, since it will only be available in select stores in Ohio. 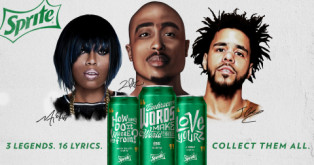 The celebratory Cavaliers cans aren't the only special packaging premiering from Sprite this summer though. The company has decided to re-up its previously successful Obey Your Verse Lyrical Collection campaign that debuted in the summer of 2015, with three of hip-hop's heavy hitters. This year, the campaign will feature 16 inspirational lyrics from 2Pac, Missy Elliott and J. Cole.

The campaign will also make use of custom designed lettering for each of the 16 lyrics that will be featured, based on each of the accompanying artists' "individual sound and unique vibe," Abby Todd, senior manager, public affairs and communications at The Coca-Cola Company, explained in an email to packagePRINTING.

Todd also wrote that the cans were printed using the same process developed for the Share a Coke campaign, which included bottles and cans personalized with hundreds of the most popular names.