After a Three-Year Absence, Coca-Cola's Polar Bears Are Back

For the first time in three years, the bears are back.

Following reports that Coca-Cola’s iconic polar bear mascots would be returning to the brand’s packaging for the first time since 2013, the company has confirmed that the famous bears will once again appear on cans and cases. 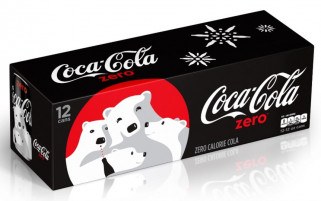 The Coca-Cola polar bears will appear on cases and cans throughout the holiday season. Photo courtesy of Coca-Cola.

According to an article by Jay Moye posted on Coca-Cola’s company website, the company teamed up with Noma Bar, a designer and illustrator who has worked with Coca-Cola on previous campaigns.

In the article, Frederic Kahn, a design director for Coca-Cola, states that this updated version of the polar bears took a step back from the realistic looking bears that have previously appeared on the beverage’s packaging. Kahn goes on to say that the illustrated bears create a graphic that is easier to print on packaging around the world. Additionally, he states that the illustration allows for some extra branding opportunities.

Beyond their status as an internationally recognized mascot, this year’s version of the polar bears features some extra Coke-themed twists, including bottle caps as eyes and the traditional Coke bottle shape as a highlight on the bears’ noses. Some of the bears are also shown drinking from a Coke bottle.

According to the article, the polar bears will appear on packaging for Coca-Cola, Diet Coke, Coca-Cola Zero and Coca-Cola Life.

Packaging Perspective: When a brand mascot reaches a level where it’s synonymous with a season, it’s clear something is being done right. Whether it’s the Coca-Cola Polar Bears or the Budweiser Clydesdales, there are certain characters that we just expect to see during the holiday season.

In fact, Coke has done such a great job incorporating its polar bears into the holiday season, I was actually shocked to realize that it had been three years since they appeared on Coca-Cola packaging. It's also interesting to hear that Coca-Cola approached the new polar bear design with international printing in mind. It's extremely difficult to identically replicate a printing production process over multiple locations, considering different equipment and environmental factors in printing plants around the world. Coca-Cola's color scheme is among the most internationally recognizable, and making it easier to reproduce around the world makes sense from a continuity perspective.

In terms of marketing via packaging, a seasonal switch-up certainly can't hurt. Soda consumption is reportedly on the decline, but Coca-Cola has been able to keep its brand in consumers' crosshairs via packaging initiatives like Share-a-Coke and its Diet Coke labels that leverage HP SmartStream Mosaic software. The Coca-Cola polar bears are a major asset, in that consumers expect to see them when the calendar hits December. I'd expect a large number of consumers — even health-conscious ones — to embrace the seasonal nostalgia and reach for a Coke this holiday season.