Seeking to build on its success as a provider of packaging prototypes and mockups, Grapevine, Texas-based Virtual Packaging began to explore opportunities to expand on its capabilities. As Tara Duckett, Virtual’s VP of sales and operations, explains, prototyping has its limitations, and once a customer is ready to move to production, Virtual would often be cast to the side.

Seeing it as a natural extension of its business, Virtual added an all-digital packaging production workflow to its operation, bringing a Landa S10 Nanographic press on board and pairing it with the digital converting capabilities of a Highcon Beam.

“In our minds, this was a natural fit for us,” Duckett says. “It was progress into the next step, but it wasn’t too big of a jump to where we were doing 1 million pieces.”

The desire to move into short- and mid-length production runs stemmed from multiple conversations with emerging brand owners. Over the course of a typical year, Duckett says representatives from Virtual Packaging attend a variety of industry trade shows, meeting with brand owners to discuss their packaging needs. A consistent theme at these recent events, Duckett says, was the rise of smaller-sized brands in need of affordable short runs, at a quality that can compete with their larger counterparts.

“A lot of those people are not really willing to commit to those huge runs,” she says. “Having the availability to come to us for smaller runs, knowing that they’re not going to get plates made, has been a real big excitement for them.”

Jordan Patterson, Virtual Packaging’s VP of administration, adds that beyond the ability to produce short runs, the flexibility that the digital printing and finishing platform provides allows Virtual’s customers to more easily make changes to their packaging.

Patterson adds that Virtual Packaging has been well-aware of the B2 digital platforms available for the folding carton segment, but opted to wait until the Landa S10 became available because of the increased capacity the press’s full-size B1 format provides.

“The reason for the large sheet size and why we didn’t go with a lot of the B2 machines out there was for capacity and to see if we could get a higher yield per board instead of printing on two boards,” he says. “Being on one sheet may allow for an extra few boxes to fit.”

While Virtual’s prototyping and mockup capabilities span multiple packaging formats, Duckett says that when the company explored entering production-length packaging, there was a distinct reason it decided to prioritize folding cartons.

Having observed the backlash against plastic packaging from both brands and consumers, Duckett explains that Virtual saw an opportunity to help its customers access a more environmentally-friendly package. In addition to the recyclability of paperboard, she says that the Landa press provides a greener print platform.

“Now the consumer, as well as [brands], are a lot more earth focused, looking for more of a sustainable process,” she says. “With us, the Landa is 100% sustainable. … There’s water-based ink and we’re running on recyclable boards. We’re also not using any aluminum plates, so we’ve got a lot less waste.” 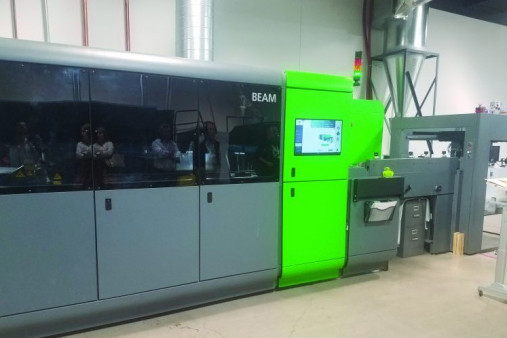 The Highcon Beam digital cutting and creasing machine on display at Virtual Packaging.

With both the Landa press and Highcon finishing system installed last year, Virtual Packaging had an opportunity to show off the equipment during an event it hosted at its facility during PRINTING United — a trade show that spans all segments of the printing industry, which made its debut in October 2019 in Dallas.

In addition to hosting an evening event at its facility, the Virtual Packaging team also had the opportunity to make the quick trip from Grapevine to Dallas to walk the show floor. Because the show includes equipment that spans all industry segments, Duckett explains that it was beneficial for Virtual to see what was on display beyond packaging machinery.

“We found ourselves looking at logistics, looking at materials, and looking at e-commerce,” she says. “There was a lot of additional stuff that wasn’t directly correlated with packaging that sparked our interest.”

Patterson adds that for Virtual Packaging, the benefit of a show like PRINTING United is that exposure to the various machinery on the floor allows the Virtual team to assess how it could potentially utilize it in its own way.

“We’re constantly on the hunt for machinery that might be marketed one way that we could adapt to use in our way,” he says. “There were a lot of cool machines there and a few that we had some interest in.”

But it was the exposure to the industry as a whole, Duckett said, that was particularly exciting. Since the debut show was located so close to Virtual’s facility, the company was able to have several staff members attend, some of which were visiting a printing industry trade show for the first time.

“We had one [new employee] — it was his very first trade show and it was the most excitement I had seen on someone’s face to be involved in something like that — getting to get out, talk to people, network, and see what’s out there and see what’s going on in the packaging and print world,” she says.

5 Ways To Wow Customers with Inks for Cardboard Packaging