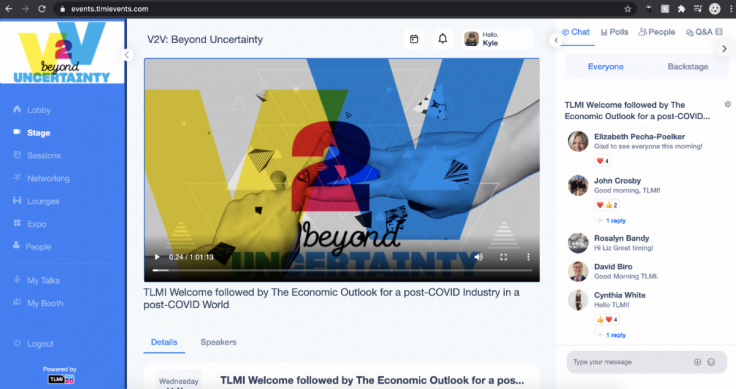 If there’s one word that could most accurately describe this most peculiar year of 2020, “Uncertainty” would be an apt candidate. But for two days last week, the virtual TLMI Annual Meeting demonstrated that if one thing is for certain, it is that whether in person or in the digital world, North America’s premier label industry association will find a way to connect with its members and provide highly valuable networking opportunities and educational sessions.

The event, initially planned for October in Colorado Springs, Colo., transitioned to a virtual gathering as a result of the COVID-19 pandemic. But with a nod to the virtual nature of 2020, the event’s theme of “V2V: Beyond Uncertainty,” made the most of a challenging situation, as converters and suppliers took part in educational sessions that featured a live question and answer component, live networking, and an awards ceremony celebrating the association’s achievements.

In a year such as 2020 however, it was appropriate to open the event with a conversation about the economy. A frequent speaker at TLMI events, Alan Beaulieu, president of ITR Economics in Manchester, N.H., delivered the first presentation of the day, “The Economic Outlook for a Post-COVID Industry in a Post-COVID World.”

While the pandemic has undoubtedly caused some economic disruption in 2020, Beaulieu detailed some reasons to be optimistic about the economic state of the future. Beaulieu stated that in the third quarter of 2020, retail sales in the U.S. were 3.6% higher than the third quarter of 2019, in part due to the stimulus package that was provided earlier in the year. As people spent their checks on necessary items, it coincided with jobs coming back, a positive trend for a rebounding economy.

Regarding individual market segments, Beaulieu recommended keeping an eye on e-commerce. While he said that brick and mortar is expected to bounce back in a post-COVID environment, more people have become accustomed to it during 2020, and it will continue to be a factor in the packaging realm.

Reardon described the different label formats and the trends surrounding their growth rates. For example, he shared that shrink sleeves and pressure-sensitive labels are the two fastest growing label applications at approximately 4% and 3% respectively. However, despite its rapid growth over recent years, shrink sleeve growth is decelerating as penetration levels out.

Additionally, Reardon said that the push toward sustainability in the label and packaging industry is continuing, and printers and converters should be aware that this push is about more than just recyclability of the final package. He said that it is important that converters assess their own internal waste generation, including how they contend with liner and matrix waste.

To close the first day of sessions at the virtual TLMI Annual Meeting, Jennifer Dochstader and David Walsh, the two principals of industry analysis firm LPC, Inc., presented data and forecasts gleaned from the preliminary results of the TLMI Market Watch Converters Survey.

Some of the key highlights from the data demonstrated how well TLMI members fared during the pandemic. When asked how their sales during the first three quarters of 2020 compared to the same timeframe in 2019, 72% of respondents said sales increased, 9% said they stayed the same, and 19% said there was a decrease.

While this is encouraging news, Dochstader detailed that the highest growth rates were coming from opposite ends of the company size spectrum. Data from the survey showed that small companies on average reported 11% growth, while large companies reported 9.6% growth. Mid-size and medium companies meanwhile, reported 2.1% and 4.2% growth respectively.

Dochstader’s theory behind this, she said, is that small and large companies tend to be “generalists,” in that they serve four or more market segments. But in the mid-size and medium range, companies tend to be “specialists,” serving three or fewer market segments. While under normal circumstances, specialization can be beneficial, during the pandemic, specialists who served declining segments, such as automotive and industrial, saw lower growth rates.

“Over the past five years, we’ve seen more specialization in our industry and it has been a great strategy,” Dochstader said. “Specializing has made all kinds of sense, however no one knew the pandemic was going to happen and it turns out specializing in one segment has had the opposite effect.”

“I think this is an important metric because we make assumptions around digital growing, but we don’t give conventional its due,” she said. “It’s interesting to gauge this and see only 20% said it is in decline.”

On Thursday, Nov. 12, day two of the virtual Annual Meeting began with a presentation from Vicki Strull, a packaging design and branding expert, who provided insights into “Packaging Through the Consumers’ Eyes.” Strull explained that packaging has four main jobs, which are to protect, attract, engage, and delight. From a graphic design standpoint however, it is attract, engage, and delight that come into play most often.

The attract portion of the equation is imperative, as it is the impetus for the consumer to pay attention to a package on the shelf. Strull explained that when consumers enter a retail environment, there is so much stimuli and competing products and packages to contend with, that being able to get a product to “scream” to a consumer while on shelf via its packaging is a great first step toward success.

Engaging the consumer typically happens after the purchase decision is made, and can be done in a variety of ways. One method that Strull detailed is segmentation. Because not all consumers are the same, by finding ways to communicate to specific demographics or subsections of the market, those consumers will recognize and appreciate the more personalized experience that brand is providing. Interactive packaging is another strategy for engaging consumers, and while it’s still in its early stages, Strull said augmented reality has proven to be an effective engagement strategy.

For example, when Jack Daniel’s launched an augmented reality feature to its packaging, consumers spent an average of five minutes and 42 seconds interacting with it.

“When we put that into the context of our attention span, being able to get a customer’s attention for five minutes and 42 seconds focused on your brand is really powerful,” Strull said.

The final educational session was presented by Colleen Francis, owner of Engage Selling, who discussed the challenges and opportunities of “B2B Sales in a Virtual World.” One of the top challenges facing B2B sellers in this day and age is that there is “decreased time and access to buyers,” Francis said.

The reduced access meanwhile, stems from buyers being “hidden behind gatekeepers,” Francis said. These gatekeepers could include insufficient technology due to working from home, or working outside normal business hours.

However, through a variety of strategies, Francis explained how some of these challenges could be overcome. One is by implementing a model she referred to as “Right on the Money,” which helps companies balance their focus between being customer-centric and revenue centric. Additionally, she stressed the importance of coaching, explaining that managers who coach their employees for three or more hours per month see a 107% quota attainment. However, Francis said that the right kind of coaching is imperative, and needs to focus on positive reinforcement.

“When you only coach them when they’re doing something bad, coaching becomes the stick,” she said. “We want to pick a time and date that’s convenient for everyone and schedule it out in advance.”

Rosalyn Bandy, TLMI’s VP of sustainability, explained that for this year’s Environmental Leadership Awards, the association provided new categories that would give more members a chance to earn awards. Because smaller companies may not have the same resources as their larger counterparts, Bandy explained that the three categories are the Trailhead category for those just embarking on their sustainability initiatives, the Journey category for companies who are already on their path toward sustainability, and the Elevation category, for companies that have implemented sophisticated programs that have shown a positive sustainability impact.

Additionally, the committee announced a new award, titled the “Leadership in Liner Recycling Recognition Award,” which was awarded to San Diego-based The Label King.

The Environmental Leadership Award winners this year are:

The label printing awards were revealed next, with Best of Class awards going to:

To conclude the evening, a video tribute to former TLMI President Dan Muenzer, who stepped down from the position earlier this year, featured several association members expressing their appreciation for Muenzer’s leadership amidst a challenging time. Linnea Keen, who has more than 20 years of experience in the label industry and previously served in multiple roles with UPM Raflatac, officially succeeded Muenzer on August 1. While the members interviewed for the video expressed sadness in Muenzer’s decision to step down, they also expressed gratitude for his tireless efforts in leading the association, along with his positive and energetic attitude.

To conclude the Awards Ceremony, outgoing chairman Michael Ritter, controller for I.D. Images, conducted the formal handoff of the chairmanship to the TLMI Board of Directors’ new chair, Lori Campbell, president of The Label Printers.

“My goal in the coming years is to ensure this association continues to bring resources and critical information to its members,” Campbell said. “The past seven months have certainly reinforced how important it is that companies have a network of industry peers to share information and to learn from. This confirms what we’ve already known. TLMI members help one another.”

Ben Markens on the Latest Opportunities in Paperboard Packaging

For Those in Package Printing, Growth Can Be Expected Throughout 2021 and Beyond