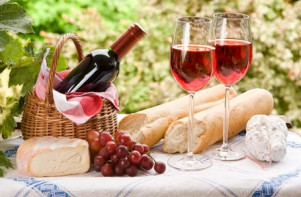 During the prior twelve months leading up to the end of the second quarter of 2022, there was one month with no M&A deals in the segment and four months with only one deal that we counted in the commercial printing segment. Of the 26 transactions in the twelve months ended June 2022, five of those occurred in just the past month. These numbers contrast with what we found in 2013, two years after we started the Target Report, when the average number of transactions in the commercial printing segment was close to 6 per month, every month.

It is too soon to tell whether this might portend a return to the norm of the pre-pandemic era, however the nature of the transactions suggests some trends that are likely to continue even if the deal count does not.

Companies Do Not Live on Print Alone

Post Capital Partners announced the acquisition of Ironmark, a diversified provider of marketing production services located in Annapolis Junction, Maryland. The acquired company was originally focused solely on printing services and operated from 1955 to 2011 under the banner Frank Gumpert Printing. In 2011, the company merged with Corporate Printing Solutions and was renamed CPS Gumpert. According to the company’s website, the combined entities grew and began offering a multitude of graphic and marketing services in addition to traditional offset printing, expanding into digital and large format printing, graphic design and web development, event promotions, promo products and e-comm services.

In the press release announcing the purchase of Ironmark and establishment of the firm as a new platform for future investments, Post Capital introduces Ironmark to its audience as an “image company” with plans to “further build upon its omni-channel marketing delivery platform.” While not eschewing the company’s roots in printing, noting that Ironmark has a “strong legacy in print-based marketing solutions,” the announcement elaborates that the company “provides a fully-integrated suite of services including commercial print (digital, offset and wide-format), digital marketing and web development, creative agency, promotional products management and a range of logistics services including procurement, warehousing, kitting, mailing, and e-commerce fulfillment, which enables its customers to realize the benefits of spend and vendor management consolidation with a single, omni-channel provider.” The message is clear, this is not your grandfather’s printing company. Rather, this new platform within the private equity universe is a marketing services production engine.

Also in June, Graphic Village announced the purchase of Sunrise Hitek Group in Chicago. The acquired company provides a wide variety of printed products and extends Graphic Village’s footprint west to Chicago. Based in Cincinnati, Ohio and with backing from Revitalize Capital, Graphic Village has been a serial acquirer of a diversified collection of graphic service providers. Similar to Ironmark, Graphic Village has its beginnings as a pure commercial printer. Bramkamp Printing, a commercial printer, served as the core company, cross-selling services with other Cincinnati graphic companies including DocuPros Digital Printing, Premier Mail and Fulfillment, Everything’s Image apparel decorating, and Quality Custom Binders. Bramkamp and DocuPros eventually merged, taking on the name of the consortium Graphic Village as the new graphic services platform for Cincinnati-based private equity firm Revitalize Capital.

Well down the pathway to being a diversified marketing services production provider, the first words on Graphic Village’s website set the tone with “Welcome to Graphic Village, your multichannel marketing solutions provider.” The inference is clear, this is not your run-of-the-mill printing company. (For more about Graphic Village’s acquisition journey, (see Regional Print Consolidator Builds Diverse Offerings - May 2020).

In addition to extolling the virtues of its expanded services, Graphic Village explicitly noted that the location of the acquired company, Chicago, was a key strategic rationale behind the acquisition. This aligns with another clear trend we have noted. Healthy commercial printing companies are building out a regional network of locations via acquisition, in contrast to leaping right from a central base to a national strategy of networked commercial printing companies. That concept, which was the strategy du jour at the turn of the century, eventually faded as Consolidated Graphics (CGX), Cenveo (né Mailwell), Printing Arts America, and Nationwide Argosy, among others, all were acquired, absorbed, deconsolidated, or simply disintegrated back into separate printing companies.

Representative of the current trend to build out regionally, Paper Airplane, a commercial printing company based in Birmingham, Alabama, acquired Colonial Printing and Packaging, located in Huntsville, Alabama. Paper Airplane announced that it was assuming operations at the Huntsville location and would offers services there as well as at its headquarters in Birmingham. The new location is approximately an hour and a half away, a good example of the regional trend consolidation trend we have seen elsewhere (see Commercial Printing: Consolidation or Regional Expansion? – November 2019).

There are exceptions to this regional consolidation trend. Missouri-based ColorArt, with backing from JAL Equity, has rapidly built up a network of acquired commercial printing companies, with locations ranging from Southern California and Las Vegas in the west, a smattering of locations in every state that connect from New Mexico all the way up to Michigan, east to Long Island in New York, and down to Florida. Ironically, in its most notable transaction, in June 2021, ColorArt acquired the commercial print division of the disintegrating Cenveo which included three major printing facilities (see CJK Goes Global as Cenveo Unwinds – September 2020). More recently, in February 2022, ColorArt acquired Cockrell Enovation, a commercial printing company in Fort Worth, Texas. The strategy is clearly national, opportunistic, and primarily print-centric.

In another twist of the patchwork of consolidation, deconsolidation, and re-consolidation, earlier this year the aforementioned regional consolidator Graphic Village picked up the Cincinnati division of formerly active consolidator OneTouchPoint. With backing from ICV Partners, OneTouchPoint was an active national player and an early proponent of layering marketing services on top of a network of print providers. However, OneTouchPoint has gone quiet on the buy side since right before the pandemic broke out in February 2020, when the company acquired Bluewater, a digital marketing services company. It remains to be seen if the sale of the Cincinnati operation to Graphic Village is a one off divestiture or the beginning of another deconstruction.

We have no doubt that these two trends will continue, exemplified by the recent uptick in deals within the broadly defined commercial printing segment. The stronger players will continue to move upstream from pure print providers and superimpose a myriad of marketing services on top of their basic analog and digital print capabilities. Some of those same top performers will also see regional expansion as their best path to growth since the overall market is, depending on who you ask, either stable or declining, but not increasing. 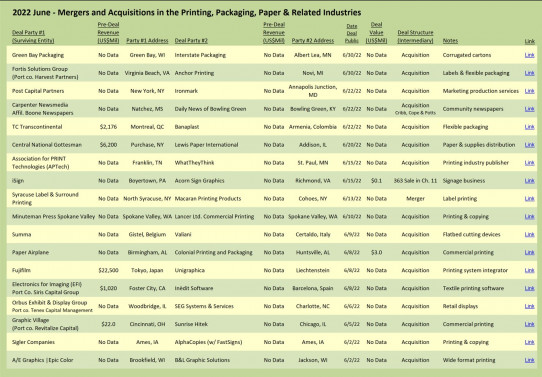