Producers of packaging and labels were better prepared than many to confront the rigors of doing business in the middle of a pandemic. Tested as never before, they did what it took to meet an extraordinary surge in demand from their customers.

Converters looking back at 2020 won’t recall the pandemic year with much fondness — no packaging business was untouched by the disruption and pain it brought. But, as it almost always does, packaging proved to be considerably more resilient in a time of crisis than other segments of the print industry.

For some converters, in fact, 2020 turned out to be a positive year despite all the odds that COVID-19 set against them. Their good outcomes, as represented by the stories of the quartet of companies profiled here, rested on three things: serving markets where demand essentially is pandemic-proof; ramping up as needed with people and equipment to meet new production requirements; and having best practices already in place that would serve their businesses well when the virus struck. 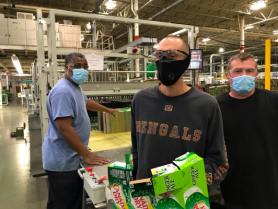 “Absolutely jam packed” is how Ed Zumbiel, president of Zumbiel Packaging in Hebron, Ky., describes the pace of work at his company as it strove to keep up with a bulge in orders from its food and beverage customers. These producers were coping with their own surges in demand from locked-down consumers taking more of their meals at home. The resulting need for packaging sent volume “through the roof,” according to Zumbiel. “Everything we make winds up in a grocery store.”

March of 2020 “was like football season” in terms of the number of frozen pizzas homebound people ate at their own tables, says Mark Turk, president and CEO of International Label & Printing Company in Elk Grove Village, Ill. He says that demand for the ingredient labels the company prints for the boxes was “incredible,” helping to offset declines in orders from the restaurant trade and other customers vulnerable to the pandemic.

A ‘Berry’ Good Thing to Have

Flextec Corporation of Colorado Springs, Colo., has specialized in packaging for the nutraceutical supplement market since the early 1990s, “before it was a thing,” says Greg Lowe, president. 2020, he notes, “was all about immunity products” people believed would keep them healthy: vitamins D and Z, for example, along with melatonin for sleep and elderberry for cold and flu symptoms.

“Elderberry was huge,” Lowe says. The public’s appetite for that remedy and others like it drove a surge in business that Flextec CEO Rocky E. Rahija describes in a written statement as “over a 50% increase in order volumes for the second and third quarter of 2020, with an overall increase of 40% for the fiscal year.”

In Kent, Wash., The BoxMaker and its e-commerce division, Fantastapack.com, had seen volumes multiply by three to five times normal by the fourth quarter of 2020: “an incredible spike for us,” according to Justin Stacey, VP of e-commerce solutions. “COVID pushed businesses to embrace e-commerce for survival,” he says, adding that as a result, lead times increased along with the unprecedented rise in orders for the company’s corrugated packages. 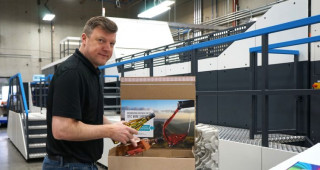 Justin Stacey, VP of e-commerce solutions at The BoxMaker, with the HP PageWide C500 corrugated packaging press in the company’s Kent, Wash., plant. Image courtesy of The BoxMaker.

With one notable exception (see sidebar below), these companies did not pivot to manufacturing personal protective equipment (PPE) or other pandemic-specific supplies. But the outbreak still made its presence felt in the kinds of products they were called upon to deliver.

Turk relates, for example, how one of his brewing industry customers “put hand sanitizer in a beer can” by repurposing some of its alcohol for that use and labeling the cans accordingly. International Label also provided the airline industry with large quantities of hand-sanitizer labels, which Turk says the carriers were “desperate” to obtain during the pandemic’s first wave.

Sanitizer labels represented “a much needed commodity to the airlines” at the time, Turk says. “We were very proud and happy to be able to do it.”

His company also lent a hand to a printing firm in Wisconsin that had received a rush order for sanitizer labels that it lacked the ability to fulfill on time. International Label took over the job on a Thursday night and delivered several hundred thousand finished labels to the Wisconsin printer on Monday morning. More orders followed, Turk says.

There was no such thing as business as usual for these converters in 2020, but there were underlying strengths that helped them deal with the stresses the year would inflict.

Zumbiel identifies his company’s “excess firepower” in large-format sheetfed litho and web flexo production for folding cartons, coupled with “a rock-solid supply base,” as the edge that kept it ahead of requests for longer runs and additional SKUs. The BoxMaker relied on automation and process optimization.

“Our ability to scale up software and workflow under rising demand sets us apart from other people,” Stacey notes.

At Flextec, says Lowe, “it’s really about our employees and what they did for us. The No. 1 issue is to take care of our customers.” Lowe credits his team with putting in “some serious, serious overtime last year,” including numerous nights and weekends, to keep production on track.

For converters, the production emergencies that come with COVID-19 differ from previous challenges only in what has caused them, not in what they consist of. These experiences prepared them for the events of the pandemic in a way that wasn’t available to other sectors of the print industry.

This meant they already had many of the resources they would need to meet the crisis head-on. “Extensive standard operating procedures utilizing state-of-the-art technology all became crucial in our ability to respond to the increase in demand,” Rahija says.

Turk explains that International Label is used to working on short notice to accommodate sudden bursts of activity. “We have customers who have been doing that to us before this ever hit,” he says.

It may take craft brewers a long time, for example, to line up the legal and regulatory permissions they need in order to bring their products to market. They brew the beer while they wait, assuring that when clearance finally is secured, their orders for labels will come in one large, abrupt batch.

“Those instances are commonplace for us,” says Turk. “It’s a very on-demand business.” Thus, there was no “culture shock” in having to kick production into high gear when COVID-driven orders began skyrocketing.

As Zumbiel observes, it isn’t possible to just rush out and buy production machinery to add capacity in circumstances like these. However, supplemental equipment has played a part in keeping production spikes manageable for some converters.

At Flextec, according to Rahija, adding digital finishing systems increased throughput by about 30%. The BoxMaker installed another CAD cutting table for corrugated, and ordered a Highcon digital creasing and cutting system as an additional solution for finishing. Stacey says the company also plans to replicate the capabilities of its Kent plant at Tango Press (Springdale, Ark.), an all-digital producer of corrugated packaging and displays that The BoxMaker acquired at the end of last year.

Converters agree that when the pandemic finally recedes, it will leave some permanently changed manufacturing routines and business practices in its wake. Turk says that at first, the idea of running a plant with no one in it except machine operators and shipping personnel seemed “wacko.” But he adds that after International Label gained some experience with remote working, “it’s surprising how much we were able to get done.”

The most profound change may be in how COVID-19 has taught plants to protect themselves against infectious disease in general. Zumbiel says that at his company, sanitation has been taken to “a sublime level” with procedures for keeping everything “super clean” throughout. There are also daily temperature checks, nurses on duty during shift changes, and testing required for anyone exhibiting symptoms. “The No. 1 challenge is keeping our crews in the building and healthy,” Zumbiel says.

With the same goals in mind, Flextec engages Servpro to sanitize its 32,000 sq. ft. building once a month in a day-long procedure that uses non-toxic cleaning agents. Lowe notes that because the Servpro crews work around Flextec personnel, production doesn’t have to be interrupted.

Lowe says that all in all, 2020 was “quite a wild ride” for Flextec — but one that carried the company into 2021 with a healthy backlog of work. For this, the employees get much of the credit: “I can’t thank them enough,” he declares.

Stacey sees 2020 as an “exercise in patience” that stressed every part of the packaging supply chain with unprecedented spikes in demand. He hopes the experience will move everyone, including customers, to be “more compassionate” with each other when the pressure starts to build.

But 2020 was above all a learning experience for converters, if at times a harsh one. “We sure have gotten educated about a lot of things we never even thought of,” Turk acknowledges. But he also notes that despite the obstacles, “we’ve been able to come to work, earn our salaries, and keep things going.”

Packaging Versatility for the Greater Good

Over a weekend at home during the grim onslaught of the COVID-19 pandemic’s first wave, Ed Zumbiel (Zumbiel Packaging) watched a TV news item about a group of people who were using 3D printers to manufacture anti-infection face shields at a rate of 5,000 per day. Realizing that a packaging company like his could turn out that many shields in a matter of minutes, Zumbiel picked up an X-Acto knife, fished some discarded cartons out of the recycling bin, and fashioned a crude prototype of a paperboard face shield on his kitchen table.

He sent photos and sketches to a structural designer at Zumbiel Packaging, and by that evening, Zumbiel’s design team had come up with a working prototype of the PPE accessory he wanted to produce in bulk. Soon after, in a teleconference with an international packaging peer group he belongs to, Zumbiel discovered that Pawi, a Swiss converter, had done the same thing. This was the genesis of FiberShield.org, a consortium now consisting of more than 40 packaging firms in 20 countries that have donated 4.2 million protective paperboard face shields to places in need.

FiberShield.org lets packaging producers download and use the Zumbiel and Pawi designs royalty-free as long as they agree to donate at least 100,000 shields to health care providers. After that, they are free to manufacture and sell them for profit if they wish to. The initiative is supported by about 20 supply chain partners that contribute paperboard and other essential supplies.

Zumbiel’s company has donated about 250,000 shields to date, including an initial shipment of 100,000 to New York State’s beleaguered Department of Health. He says that although he is proud to have been among the founding members of FiberShield.org, he looks forward to the day when mass-producing PPE will no longer be necessary.