With the recent installation of a preowned Truepress Jet L350UV, UK label manufacturer Positive ID Labels has expanded its digital offering to customers to three digital printers, bringing it closer to its goal of a one-stop label shop. 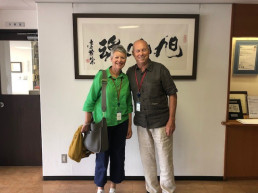 Positive ID Labels has long been one of the UK’s leading pricing gun label producers, but with that market shrinking over the past 20 years, around 80 percent of its £2.5m turnover now stems from manufacturing labels. It uses both flexographic and digital print technologies at two production sites near Nottingham, in the East Midlands.

Commenting on the L350UV’s strong points, Positive ID’s managing director, John Mayers, points to the overall print quality: “A rerun of a job six months later retains exactly the same quality,” he says. “But the most impressive characteristic of the L350UV is the speed – on a good day, it can get close to 50 meters per minute, which means it can generate a lot more turnover for a similar machine and ink cost.” The machine is also simple to use, and SCREEN is a very easy company to deal with, he says.

Founded by Mayers in 1997, Positive ID focuses on label markets such as food, beverage, cosmetics, chemical and hygiene. Positive ID, with its 25 employees, is certainly no strangers to digital label printing, having bought its first digital press in 2012.

“Our strategic goal is to become a one-stop label shop for our 4,500 customers, as it’s always easier to grow your company via your existing clientele. So, we needed an extra digital label printer for barcoding, but also for mid-range printing jobs,” Mayers says.

SCREEN’s L350 UV featured on Positive ID’s radar as far back as 2017, and Mayers travelled to both Amsterdam and Kyoto to see the machine. He recalls: “Back then, there were only new L350UV machines available, and we couldn’t afford one, having just acquired several small printing companies. But we always liked the SCREEN machine, and as soon as the preowned L350UV option became available in March 2021, we bought one.”

For now, Positive ID’s first SCREEN machine is running at 10 hours per week, but the goal is to reach enough jobs to have it fully automatized and running eight hours a day by Christmas. “We’d be very happy to get to 12 hours per day somewhere next year, which would mean our turnover should increase to £3m,” Mayers says.

Positive ID’s MD expects digital labels will only continue to grow. “Digital and flexo both equally represent 30 percent of our turnover, and we’ll still need the analogue technology for the big runs. Last week, for instance, we produced seven pallets of labels for a single customer. But in five years, digital will be the dominant part of our turnover. All our new customers are already starting with digital, as it’s just a simpler and quicker offering, with better quality.”