The Results Are In: Drupa 2016 By the Numbers

Click here to view the drupa 2016 Data Sheet as a PDF.

As the world's largest print media trade fair, drupa is famous for the massive crowds it draws to Messe Düsseldorf for the 11-day show. This year, more than 260,000 visitors entered the drupa gates. While much of the news coming out of the show was about what was on display, it's also important to understand who these 260,000 people are, where they came from, and what it means for the industry.

Luckily, Messe Düsseldorf has released this handy infographic that details exactly that. Here are some key takeaways about the thousands of print pros that helped define drupa 2016.

Packaging Perspective: One fourth of all visitors came from Germany, but the fact that the number of countries being represented at the show is growing demonstrates that developing nations are increasing their desire for the latest printing technologies. At this rate, it would not be surprising to see representation climb even closer to the 200-country mark. That's getting into Summer Olympics territory! 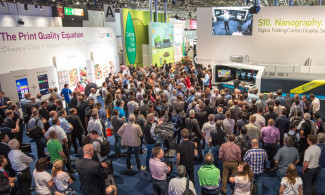 Most likely due to the travel requirements and vast quantity of domestic trade shows, drupa historically has not drawn a large audience from the Americas. That trend continued this year, with 9% of attendees making the trek from North and South America combined. However, one eye-opening statistic that emerged from the Western Hemisphere's attendance is that the United States had the fifth highest overall attendance. While the U.S. contingent made up only 3% of the entire show, it was surprising to see American attendance ahead of European countries like Great Britain (No. 6), Belgium (No. 8) and Spain (No. 10).

People Went for the Packaging

When drupa 2016 opened its doors, the emphasis the show placed on packaging marked a stark change in direction. Historically, drupa has been geared toward the commercial and document printing segments of the industry, but many have referred to drupa 2016 as "The Packaging drupa" and even "The Digital Packaging drupa." According to the infographic, 34% of attendees expressed an interest in the latest packaging production product ranges. This was the second-highest ranked product category, trailing just behind the obvious No. 1 — print. 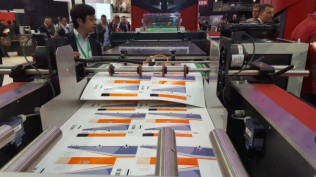 Digitally printed packaging on display in the Xeikon booth.

Packaging Perspective: Commercial printing is still a strong and viable industry. But drupa 2016 demonstrated that packaging is where the real growth is. It seems that commercial printers are realizing that as more of their product offerings go digital, labels and packaging are not just relevant, but are growing in demand due to SKU proliferation, demand in variability and the potential for smart packaging. As more commercial printers take on packaging capabilities, and industry suppliers pivot into the packaging space, expect packaging to continue to be a big draw at drupa.

Part of what separates drupa from the rest of the trade show pack is that it's known as a launching pad for the latest innovations in print, going beyond just being a platform for industry professionals to connect with suppliers. In fact, the drupa 2016 infographic shows that the No. 1 reason people attend the show, at 55% of responses, is to see the latest printing innovations and trends.

The Highcon Shape displayed its ability to produce 3D structures made entirely out of paper. The Shape is expected to be released by the next drupa.

Packaging Perspective: To me, this is the most important statistic that Messe Düsseldorf included in this graphic. Asking the question, "What are your reasons for visiting drupa?" could just as easily be rewritten as "What is drupa's value proposition to you as a visitor?"

Clearly, the industry recognizes and respects drupa as the destination to catch a glimpse of printing's future. It may end up that every beta or concept product on the show floor doesn't quite make it to market, but spending a few days roaming through drupa's 19 halls is sure to provide a clear snapshot of where the industry is heading. While connecting with suppliers and gaining insight into purchase decisions did prove to be important reasons for printers to attend drupa, it's clear that the show's real value proposition is that it provides a look at how the future of print might play out.

The Top 5 Packaging Impressions Stories from 2020

2020 State of the Industry: Folding Cartons on the Front Lines

The PRINTING United Digital Experience Continues with Engagement Through the Holiday Season, Sets the Stage for 2021
Comments
COVID-19 Resource Channel