Convergence emerges at PRINTING United with a diverse show floor.

What started as a shared vision two years ago emerged as a triumphant reality Oct. 23-25, as approximately 30,000 visitors flooded the halls of the Kay Bailey Hutchison Convention Center in Dallas for the debut edition of PRINTING United.

That shared vision, between the Specialty Graphic Imaging Association (SGIA) and NAPCO Media, was to create a platform in which the entire industry could come together at a singular event encompassing all things print. The result of this years-long collaboration is PRINTING United, the evolution of the former SGIA Expo, which expanded the scope of show participants to include commercial, in-plant, and packaging printers, in addition to the wide-format and garment printing equipment that SGIA Expo attendees are used to seeing.

“There has always been an energy at the show, but it has been amplified this year,” Ford Bowers, president and CEO of SGIA, said. “It shows just how vital this industry is.”

Throughout the three-day show, it was hard to traverse the halls and show floor without hearing buzz about, and evidence of, industry convergence. The key theme behind the development of PRINTING United, the concept of convergence stems from the increased activity among print service providers entering and exploring segments of the printing industry outside of their traditional core product line.

“I couldn’t be more pleased with the amount of people and diversity of the equipment,” Mark Subers, president of NAPCO Media’s Printing and Packaging group, and president of PRINTING United, said. “It’s really representing the theme of convergence. It has been great to see people really digging in and looking at the equipment.” 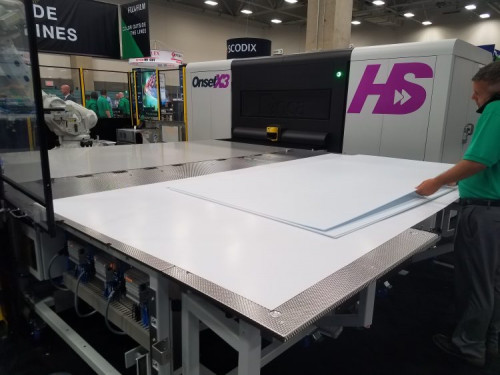 The Inca Onset X3 HS, which can be used for corrugated, drew big crowds.

The concept of convergence was on display in Heidelberg’s booth, as the longtime industry pillar received a great deal of traffic and interest from a variety of printers. With its diverse portfolio, Felix Mueller, president of Heidelberg Americas, said the company was able to engage with printers from multiple segments.

“We are really pleased with the turnout at PRINTING United,” Mueller said. “The customer engagement and reception has exceeded our expectations. In the last couple of days, we were able to meet printers of all sizes and discuss their print shops’ specific printing needs. We look forward to continuing to work with these customers on finding the best solution for their print shops. In addition to the equipment we have here at the show, customers have been very excited to speak to us about everything we offer across all product lines and segments.”

Carrying the theme of convergence into its booth proved to be highly beneficial for Konica Minolta, which saw significant equipment sales on the show floor. With an array of products serving a variety of print segments, Kevin Kern, senior VP, business intelligence services and product planning, said PRINTING United provided an excellent platform to reach the entire print community.

“Konica Minolta aligned our product portfolio and event strategy around PRINTING United’s convergence theme, and the return on investment has been significant,” Kern said. “We’ve brought a full array of solutions to satisfy the variety of attendees and we’ve been able to recognize mid-seven figures in sales through [Thursday, Oct. 24]. In short, PRINTING United has been a wonderful success because we prepared our presence focusing on what attendees expect to see.”

Fujifilm was another exhibitor that benefited from the diversity of attendees at the show. For example, Gregory Pas, director of product marketing for Fujifilm North America Corp., Graphic Systems Division, was pleased with equipment sales to customers on both coasts.

“Fujifilm had an extremely successful showing at PRINTING United with the sale of the new J Press 750S shipping directly from the show floor to a customer on the West Coast and the Inca Onset X3 HS with three-quarter robotic automation heading to a customer on the East Coast,” Pas said. “Fujifilm is changing the dynamics of print with its innovative inkjet technology.”

The launch of PRINTING United stretched 724,000 gross sq. ft. of space and seemed to spark an enthusiasm among attendees, exhibitors, and industry analysts, who were encouraged by the ubiquitous excitement and diversity of equipment on the show floor. Frank Romano, professor emeritus from Rochester Institute of Technology, has been a mainstay at industry events for decades, and said PRINTING United is the best trade show he has attended in more than 20 years. 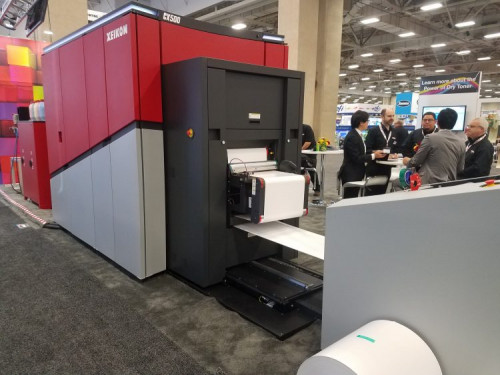 Xeikon showcased its CX500, which can produce a variety of printed products, including labels and packaging.

“PRINTING United is the best industry trade show I’ve attended since 1997, which was the last exhibition that used all of the halls at McCormick Place,” Romano said. “PRINTING United is the first major show of this era. It’s so diverse, across multiple industries. And if they can sell out 1 million sq. ft. in Atlanta next year, it will truly be fantastic.”

At the Ricoh booth, the constant flow of traffic made for a highly successful show, as attendees were able to not only see the latest Ricoh equipment, but its software and service offerings as well.

“The traffic we’ve had at our booth has been unstoppable and already profitable,” Heather Poulin, senior director, marketing, commercial printing business for Ricoh USA, said. “The experiences we’re giving our customers and prospects, all in one booth wrapped with software and professional services, is a true microcosm of what we see as the future of our industry, and it’s exactly the convergence PRINTING United set out to showcase. It’s been thrilling to see it all come to life.”

One of the SGIA show’s longtime exhibitors, OmniPrint International, a manufacturer of direct-to-garment printers, has been able to expand its presence at the show as the company has grown. For Sergio Ramirez, director of digital marketing for OmniPrint, looking back on past SGIA Expos put the magnitude of PRINTING United in perspective.

“We’ve been part of this show since it was SGIA Expo,” Ramirez said. “When we started we were in a 10x10 ft. booth, but now we’re a Diamond Sponsor and this is our biggest booth. We’re stunned by how big the show is.”

With its debut edition complete, looking ahead to the second PRINTING United, Oct. 21-23 in Atlanta, promises even more floor space and diversity of equipment. And as the industry continues to converge, PRINTING United is poised to become the place to be to meet printers from all across the industry.

“I always like to ask exhibitors if they are seeing people they wouldn’t normally see at the other trade shows they attend,” Bowers said. “And they’re all saying, ‘yes.’”

The Foundation of Convergence at PRINTING United