Supply chain challenges have accelerated what was already a dramatic shift from analog to digital printing of labels that was already being driven by a number of factors, including the increasing availability of affordable digital presses, the declining cost of inkjet technology, the need for shorter turnaround times for smaller runs, and the introduction of faster and more capable digital presses for label printing. 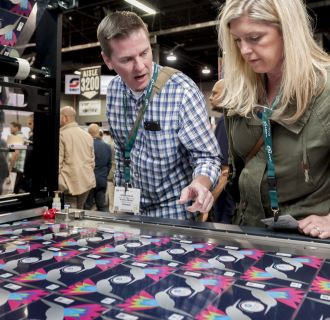 How fast? Take the HP Indigo V12, which had its global launch at Labelexpo Americas 2022 with the global launch of the HP Indigo V12. A new rotary blanket technology allows the press to reach speeds of 394ft/min (120m/min) in up to six colors. HP is positioning the V12 head-to-head with flexo, claiming it has superior print quality and greater productivity.

Quality was also a focus at Durst's booth at Labelexpo, where the company issued a direct challenge to four-color flexography with its Tau RSCi, shown for the first time printing at 1200x12000dpi resolution at 100m/min on a 20-in. web in four colors, with flexo units both before and after the digital engine.

Mark Andy addressed the mid-market label printing sector with the global launch of the Dpro Max press, which achieves speeds up to 130ft/min (40m/min) in CMYK+White. Also making its global debut was the Digital Series IQ, a mid-market hybrid press developed jointly with Domino.

Domino also made the worldwide debut of the N730i digital press, a successor to the N610i. The N730i is the first label press to make use of the 1200x1200 dpi Bitstar print head technology developed by parent company, Brother. The N730i prints in up to seven colors (CMYKOVW) and can be fitted with pre- and post-digital flexo units.