Advancement in the manufacturing world is often viewed through a lens of efficiency, as new technology makes essential process steps faster. However, in many instances, it’s the removal of steps entirely that can provide the highest-impact results.

An example of an aerosol canister digitally decorated with Velox technology.
Image courtesy of Velox.

Historically, label and package printing has been a two-dimensional process, with sheets or a web passing through a press, to then be converted into three-dimensional objects. But, with the rise of direct-to-shape and direct-to-object printing becoming increasingly viable technologies, package decoration can be viewed in a whole new light.

There are several methods of printing directly onto an object, whether it’s a wine bottle, cosmetic tube, or industrial application. But the advantages generally come down to similar concepts, including freedom of design, reduction of waste, and the elimination of materials and steps in the production process.

While these advancements may at first appear to be a threat to the label segment, which has primarily been called on to provide decoration on these types of products, according to Craig Reid, the founder of CTR Resources, a consulting firm specializing in direct-to-shape printing, labeling as we know it isn’t going to disappear. Direct-to-shape is poised to complement conventional labeling by giving brand owners more freedom of choice in their packaging decoration tactics.

“There’s always a little bit of disruption in the supply chain when technology is introduced,” Reid says. “Compared to applying an already printed label, inkjet directly to a shape, such as to a cylindrical container, is simply offering a late-stage differentiation option for both the brand owner and for production.”

Directly printing on containers has been a viable package decoration option for decades via print processes including dry offset and screen printing. But as traditional packaging applications have become increasingly impacted by digital printing, direct-to-shape has entered the digital realm as well.

According to Jim Lambert, VP and GM of INX International, when digital direct printing options first began to emerge, they were largely utilized for applications such as prototypes and promotional products. However, he says that solutions capable of production-length output have come online, taking direct-to-shape into a new realm. INX International has developed some of these systems, including its CP100 and CP800 cylindrical inkjet printers. 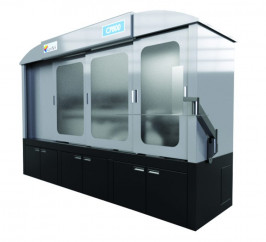 Lambert states that several large companies have put direct-to-shape solutions into their production lines, adding that the technology has taken hold in a variety of consumer product market segments, with companies now able to decorate thousands of bottles or cans at a time.

One company that has made the jump into direct-to-shape digital printing is LageenTubes, a global manufacturer of collapsible plastic and aluminum tube packaging, serving customers in the cosmetic, personal care, hair care, oral care, pharmaceutical, and food sectors. Founded in 1967 at Kibbutz Yagur in northern Israel, LageenTubes operates in both Israel and in Europe and has a long history of direct printing utilizing conventional technology. However, Iftach Shachar, international sales and marketing director, explains that as digital technology became a viable option in direct-to-shape printing, LageenTubes immediately recognized its advantages.

This led to the installation of the Velox IDS 250 direct-to-shape digital decorator at LageenTubes in the spring of 2018. Velox, a provider of digital printing solutions based in Rosh Ha’Ayin, Israel, developed the IDS 250 to help bring digital direct-to-shape printing into the mass production mainstream, and away from being relegated to short, expensive runs, says Ofer Nir, VP of marketing and business development.

In addition to its production capabilities that include high-quality decoration, operational agility, and affordability, Shachar says that another benefit of the Velox technology is its ability to digitally print on the cap of the tube, extending the design elements of the package and making it more visually appealing to consumers.

“That definitely stands out and gives an advantage to our customers,” Shachar says. “If I had to design the cap to look different, it would require a heavy investment. Here you have something that is completely pushing the envelope and proving to be a solution that everyone is looking for. Customers want to differentiate the product on the shelf and you have it right there.”

Shachar also adds that ever since the Velox IDS 250 has been installed at LageenTubes’ facility, the company has been approached by large brands who are very interested in the technology.

Beyond the cosmetics and personal care markets, Reid explains that digital direct-to-shape printing has also been beneficial in market segments requiring durability in its labeling. For example, he explains that direct-to-shape technology exists for a variety of substrates, including glass, metal, foil, and plastic, and is also starting to make an impact on in-mold labels.

“In the in-mold world, you want this significant durability from chemicals, environment, and handling,” Reid says. “You don’t want just a paper label on the outside that can be damaged or affected by chemistry, water, or other environmental conditions. Some of the latest industrial UV inkjet inks and coatings can now provide much of, if not all, the durability needed for in-mold applications, only simpler by enabling product decoration directly on already formed containers.”

While packaging’s two primary functions are to protect the product inside and inform the consumer about the product, it can also serve as a value-adding attribute to help a brand stand out against its competition. As Caitriona Anderson, VP of sales and marketing for Monvera Glass Décor explains, direct printing on a package can both support a premium product’s quality and elevate a lower-cost item in the eyes of a consumer.

Monvera Glass Décor, which specializes in screen printing on glass bottles, serves a variety of market segments, with much of its business coming from the wine segment, due to its location in Richmond, Calif., near the Napa and Sonoma wine regions.

Initially, Anderson says, Monvera’s screen printing services were mostly used by premium wine brands — including some that retail for more than $50 per bottle. However as brands producing wines at lower price points began to catch on to the benefits of screen printing, Anderson explains the differentiated packaging helped them stand out in a crowded market segment.

“You will see screen printing for products at the lower end of the market,” Anderson says. “In that situation, the screen-printed label can help differentiate the product from the rest of the competition because there’s so much noise down there. It helps create value. If you see a $12 bottle of wine, you feel like you’re getting more value for the money because it has that premium package.”

Beyond the visual appeal of a direct-printed package, Reid says that with the latest inkjet technology, direct printing of packaging can appeal to multiple senses. Similar to the way an embossed label or spot varnish on a folding carton can entice a consumer to reach out and pick up a package, clear coatings can be applied via inkjet technology on the package’s surface to create a tactile feel.

Screen and some flexo printing can provide this same effect, Reid explains, but now that inkjet technology has come online, brands in various market segments can be less concerned about sacrificing design elements when deciding between a digital and a conventional process.

“Cosmetic companies have traditionally liked that tactile feel because it makes their products seem more exclusive,” Reid says. “So many of the containers that the cosmetic products are in are decorated via screen printing on purpose because they wanted that raised feel, and now inkjet can provide that.”

In addition, the customization and personalization advantages of digital direct-to-shape are similar to what can be achieved in digital label and package printing. And, as Nir explains, with the Velox solution, production-length runs and customization at scale is now a reality.

“Mass customization is available for the first time ever with our technology,” he says. “I say ‘first time ever’ because you need digital printing technology and mass production technology.”

In any industry, when a new technology emerges onto the scene, the natural question is if it is poised to overtake the technology that preceded it. With direct-to-shape printing, at first glance, it may seem like a technology that presents a threat to the label segment. However, the reality appears to be that it will be a complementary technology that gives brands more options to choose from when deciding on a packaging format.

For example, Reid explains that in situations where speed-to-market is very important, a brand may opt for digital direct printing because it removes steps from the process. But, he adds the technology has not reached a point where it will become ubiquitous throughout the industry.

“Labeling is not likely to ever go away,” he says. “It’s got to be more of an offering where the brand owners can say, ‘Do I choose a label? Or do I go direct?’ New digital inkjet technology is simply giving them a digital solution either way.”

“The brand owners love it because they can go and experiment versus spending a lot of money on different plates and dies and things like that,” he says. “They can go in and give a packaging company four different artworks and say, ‘Print all four of these. I want to look at them on the shelf and see which one has the largest impact.’”

While screen printing is price competitive at lower volumes, Anderson explains that screen printing large volumes tends to be more expensive than utilizing paper labels. But, she says, the added design elements and marketing impact that direct printing provides, along with certain logistical advantages, can make it an appealing option in certain circumstances.

For example, she says that part of the advantage is that when the bottle hits the filling line, it’s already labeled, removing steps from the process of getting that bottle shipped.

While still in its emerging stages, Reid says that direct-to-shape technology has reached a point where printers and converters would be wise to explore the potential advantages of bringing it on board. Though it’s unlikely to evolve as a 100% replacement for traditional labeling, direct-to-shape can be an enticing option for brands, and printers that can provide their customers with multiple choices, may enjoy a competitive advantage.

“After decades of inkjet development in chemistry, components, and hardware, we’re finally there with the right combination of technology, quality, and the ROI pricing that is making sense,” he says. “People should no longer be afraid to explore this, as inkjet has already moved from a novelty to real-world production.”