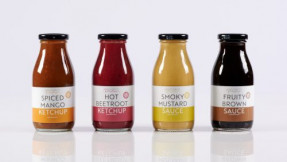 Innovia Films has developed a high-yield, semi-solid, glossy white BOPP film, Rayoface JB.  This 47-micron film, designed for pressure-sensitive labeling (PSL) applications, combines some of the advantages of cavitated and solid films into a semi-solid film. JB47 has a coating receptive surface to allow customers to add their own printable topcoat and has EU and FDA food compliance.

Rayoface JB is particularly suitable for use within a wide range of market segments such as Household and Personal Care, Food and Beverage, and other consumer packaged goods sectors.

Produced at Innovia Films Poland, on their advanced technology 5-layer BOPP line, JB is a superior performance product. Compared to a solid white film it has much better opacity and higher yield. The glossy film surface has excellent compatibility to top-coatings and PSL adhesives and importantly also has EU and  FDA food contact compliance.

Stephen Weber, key account director, explains, “The semi-solid nature of JB47 means it has some of the advantages of a cavitated film whilst still behaving closer to a solid film.  It has the glossy white, high opacity appearance of a cavitated film and a higher yield than a solid white film. Combined these features make JB47 an aesthetically and economically attractive film.”