Over the past year, the packaging market has proven to be one of the strongest growth areas in the printing industry. While documents continue their transition from paper to digital, it’s hard to imagine a world where consumer products are not sold with some form of printed packaging.

As the packaging market grows, the label segment has been at the forefront of technological developments and creative consumer engagement. Short runs have continued to increase and brands and converters are seeking to differentiate their labels by thinking beyond print. Digital technology is gaining further market acceptance and converters who can optimally balance digital with analog will find themselves ahead of the pack in a highly competitive field.

According to Sean Smyth, a print specialist and consultant for Smithers Pira, changing demographics and packaging trends are major drivers of the increased demand for labels. Smyth explains that the quantity of households has expanded, but fewer people on average are residing in each household. Packaging sizes are starting to decrease and product lines are becoming more varied.

With these shifts, combined with changing legislative requirements in North America and Western Europe surrounding nutritional information in food and allergen information in pharmaceuticals, prime labels are trending upward.

“We’re seeing significant growth going forward in prime labels,” Smyth says. “As the number of packs increases, the amount of labeling increases. We don’t see that falling away any time soon. In fact, it’s probably accelerating with the competition between the big brands and the upstart new brands coming in.” 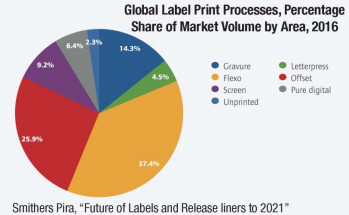 In addition to consumer demographics changing, Smyth explains that consumer preferences are shifting as well. While big multinational brands still have a strong presence in the label market, consumers are demonstrating increased interest in small-batch, locally sourced, artisanal products.

Because these items tend to be from smaller companies and require shorter runs, they have assisted in driving up the demand for labels and have been a key factor in the rise of digital printing in the label sector, Smyth explains.

“We see a big trend with artisan and boutique producers of foods or personal care [products] … with short runs,” he says. “That’s been one of the big drivers for the adoption of digital technology in labels, which has outsold flexo over the past few years. We don’t see any change in that going forward.”

Short Runs Still on the Rise

As digital technology has continued to improve and gain adoption in the packaging industry, short-run production has increased. SKU proliferation has continued on shelves as brands are seeking more variations in their product lines.

Bob Leahey, associate director for InfoTrends, explains that short runs have indeed been a major driver in the adoption of digital printing, but adds that digital equipment vendors continue to improve the systems that they offer. One trend he sees is the increase in systems that provide an end-to-end digital solution for label production, making short runs for complicated labels a reality.

Leahey says that established digital suppliers like Durst, EFI Jetrion, HP Indigo and Xeikon have all made significant strides in adding in-line finishing and converting capabilities to their products. This approach provides a significant step forward in digitizing the entire label production process.

“It means you have more ability to do more things digitally,” he says. “Thus, with the complex label or the very high value label, you can do it in a very short run in a single pass. That’s helpful, and it will be welcomed by converters.”

While short runs have been a boon for digital printing, Leahey says flexographic label press manufacturers have also responded to the trend. He explains that important developments in flexographic presses have made them better equipped than earlier flexo systems to print short runs, especially by requiring less changeover time and greatly limiting waste. He notes though, that the most inventive flexo suppliers have also begun to offer digital products, including hybrid flexo/inkjet presses. Mark Andy, with its digital series, and Gallus with its Labelfire 340, are top examples, each offering a customized mix of inkjet and flexo stations.

“Converters that have color digital presses can move short runs off their analog presses, freeing them up to print long runs and to concentrate on the work they do so efficiently.”

Smyth presents a similar take, explaining that medium to long run jobs are still in demand, and by being able to handle a variety of run lengths, converters could find themselves in a lucrative position.

“Hopefully if you get the sums right as a converter, you’ll end up making more money by using both sets of equipment in an effective manner,” he says. “We don’t see digital as the death nail for flexo — certainly not in the medium or short term. There is significant room for both technologies to be involved.”

Stand Out From the Crowd

As digital continues to gain market acceptance and the print quality gap narrows between flexo and digital, it’s becoming more challenging for labels to stand out on shelf solely through print.

Leahey explains that vendors have caught on to this trend and are focusing on what they can provide beyond print. He says that both digital and flexo suppliers are now “marrying” processes that are normally separate, adding features such as in-line laser cutting, digital embellishments or additional flexo or converting stations. One key, he says, is providing a central control system that operates more than just printing. 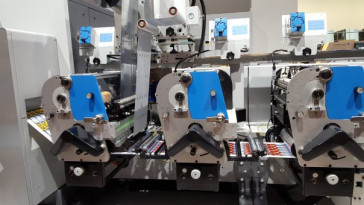 The Gallus Labelfire 340 is one example of a hybrid end-to-end label production system.

“Having a central point of control doing more than just digital printing has become kind of a theme.” Leahey says. “We’ve seen it at HP Indigo and Xeikon, and also with Gallus and Mark Andy. It’s another way vendors are advancing, asking, ‘What’s the next thing we can do?’ Marrying print with other processes is one answer.”

Smyth explains that just adding digital capabilities is no longer a substantial differentiator for label converters. Instead, he says converters can offer increased value to their customers through the optimal arrangement of their finishing lines.

While brands have primarily led the way in innovative usage of digital printing, such as Coca-Cola’s Share-a-Coke campaign, Smyth says that converters have been leading the charge in developing creative labels through the use of enhancements.

“Whereas a digital press itself may not necessarily give you differentiation, how you choose to arrange your finishing systems to add value does,” he says. “If you talk to the big finishing equipment suppliers, they will tell you the length of their lines are growing as people are adding silkscreen varnish units, cold foiling and hot foiling — whatever it might be to add value to the label.”

It’s All About Engagement

Like any packaging segment, Smyth explains that successful labels are able to strike a high level of engagement with consumers. And while digital printing has received a great deal of attention, Smyth says the future is bright for engaging labels produced through any process.

“It’s not just digital,” he says. “We’re seeing smart technology and embellishments in traditionally flexo printed labels to get a higher apparent appearance.”

In such a crowded marketplace, it can be difficult to find a way to stand out. But, Smyth says, brands, designers and converters who work together to generate new experiences for consumers drive up consumer interest. Creating a visually appealing and information-heavy label is certainly important, and leveraging new technologies can help trigger the moment of truth.