Offset printing may have a lengthy history, but that does not mean it lacks in innovation. Printers and converters rely on the latest in offset for high-end packaging.

As director of creative services for Hub Folding Box, Zane Peterson says that he often looks for ways to push the envelope in the packaging the company creates. With a reputation for superior print quality serving a wide variety of brands, Hub Folding Box has made significant investments in its offset printing equipment to help curate its packaging innovation.

Consumer engagement is at the core of a successful package, Peterson explains, as standing out on crowded retail shelves has become increasingly challenging. With the right technology at its fingertips, Hub Folding Box has been able to take its customers’ folding cartons in new, exciting directions.

“The thing that’s always on my mind is, ‘What design techniques can I utilize to grab a consumer’s attention?’” Peterson says. “Then, once I’ve piqued their interest, how can I enhance that engagement once they pick up a product? With the technologies of the presses at Hub, I honestly feel like a kid in a candy store as to what I can do.”

Offset printing technology has long been the go-to platform for folding carton production, and as evolving brand and consumer preferences and lifestyles have altered the packaging landscape, the technology has advanced as well. In both its graphic and embellishment capabilities, along with efficiency improvements, offset has remained a viable and innovative platform for folding carton production.

Taking Print to the Next Level

While the fundamentals of offset printing have largely remained the same over its many years as the dominant technology in folding cartons, its ability to be customized to meet certain needs has helped converters take it to new heights.

Hub Folding Box operates both Heidelberg and Koenig & Bauer equipment in its Mansfield, Mass., facility, specializing in various capabilities and customized to perform certain tasks. Peterson explains that Hub Folding Box’s ability to introduce new decoration techniques to its packaging is a key advantage it brings to its customers. 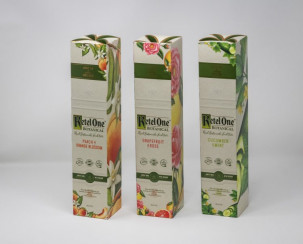 One innovation Peterson points out is the development of Hub’s in-line liquid foil capabilities. This combination of in-line foil and liquid ink technologies allows for tremendous flexibility, Peterson explains, and allows Hub to offer its customers a more efficient and cost effective alternative to the traditional hot foil stamping process.

“In-line foil creates an affordable way for Hub’s customers to add value to their packaging solutions and differentiate their products and drive their sales at retail,” Peterson says.

Beyond the visual components of a package, however, the latest in offset printing technology has also allowed printers to add a variety of tactile elements to their packaging. For example, for Winston-Salem, N.C.-based Salem-One, the combination of UV inks and UV coatings has allowed the company to introduce a variety of visual and haptic elements to its packaging.

Salem-One was founded as a commercial printing company, but began to bring packaging services on board around the mid-2000s, says Phil Kelley, Jr., Salem-One’s president. Since that time, Salem-One’s packaging division has expanded to represent 50% of the company’s business, and three Komori Lithrone G40 presses have come on board to serve its wide variety of customers.

Kelley explains that Salem-One strives to provide its customers with a high-end package that will communicate a high level of quality to consumers as they browse retail shelves. The capabilities of the latest in UV offset printing, he says, helps Salem-One do exactly that.

“You can really add depth and feel to a product,” Kelley says. “Reticulating varnish combined with a UV can also give you various tactile feel designs. It’s up to us to experiment with that, but Komori, Toyo Ink, and our other vendors would say that Salem-One has been very active in trying to be innovative in that reality.”

In With the Old

When Stoughton Printing was founded in 1964, it specialized in printing the circular center labels found on vinyl records. However, as the company grew, it expanded into printing the paperboard packages that contain the records, also referred to as the record jacket.

As the music industry evolved and vinyl records began to be phased out, Stoughton expanded its capabilities to serve a variety of commercial packaging and printing segments, including folding cartons, litho labels, game boards, and more. However, with the vinyl revival in full swing, the company has extended its roots into the music packaging world, discovering creative ways to print legacy packages in a modern environment.

Stoughton Printing operates two Heidelberg offset presses, including a six-color, 41˝ Speedmaster “Next-Gen” CD102-6+L2X it installed in 2014. As vinyl continues its renaissance among music consumers spanning casual listeners to discerning audiophiles, remastered and reissued albums are constantly being released. For collectors seeking to recapture the experience they had with these albums from decades past, company President Jack Stoughton, Jr. says attention to detail is essential.

“We are charged with making some unique legacy manufacturing,” Stoughton says. “If you’re a Beatles fan, a Rolling Stones fan, or a Crosby Stills & Nash fan, you’ve seen that package a million times. We have to produce that package to look exactly like [the original].”

One of the methods Stoughton Printing has developed to bring these vintage albums into the modern era is its trademarked Old Style brand tip on jackets. Stoughton explains that Old Style got its name because it is reminiscent of how record jackets were made in their heyday, with a top sheet that is wrapped around the paperboard jacket. Not only does the Old Style method allow Stoughton Printing to implement various paperboard thicknesses, it also increases the flexibility of the printing and embellishments that can be implemented onto the package.

But because the papers and inks utilized in the modern process differ from what was used in the legacy packages being recreated, a combination of thorough research and state-of-the-art printing technology must be employed. For example, Stoughton explains that whether it’s a rock album from the 1960s or ’70s, or a jazz record from the 1930s or ’40s, the key to recreating the package with any level of authenticity is replicating the screen angles from the original printed piece.

To do that, Stoughton Printing makes use of Heidelberg’s Prinect workflow technology, which is able to match the screen angles and output them during the prepress process. While locating an original album jacket and replicating the screen angles may make for an added step in the process, Stoughton says that utilizing this technology makes for a package that is far more true to form for the consumer.

Though Salem-One may be a relative newcomer on the packaging scene compared to some of its counterparts in the folding carton space, Kelley says that the company strives to provide its customers with exceptionally fast speed to market. He explains that the company’s Komori presses feature a very high level of automation and, with its ability to save jobs, can instantly recall a prior job to be repeated precisely as it was in the past. 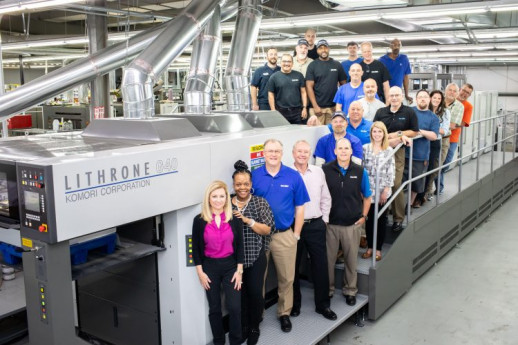 The team at Salem-One poses with one of its Komori offset presses. Credit: Komori.

Additionally, he explains that although there are differences and specialties for each of the company’s Komori presses, Salem One’s color management through the G7 process allows it to transfer jobs between presses with minimum interruption.

“We can get our curves and manage ourselves through the G7 process to be able to put a set of plates on any press and produce a Delta E of two or less color consistency across that entire platform,” Kelley says.

For Hub Folding Box, Peterson says that the automation aspects of his company’s presses are highly beneficial during the makeready process. He explains that unlike the commercial printing world, where most jobs are able to maintain the four-color process units, the complexity and marketing expectations of folding carton production typically requires a complete changeover between jobs.

The direct-drive technology of the company’s Koenig & Bauer presses, Peterson says, expedites print unit makeready for the next job, in addition to its automation in plate changes and color management. During the press run itself, Peterson says the cameras on board the press have the ability to scan every sheet and provide the press operator access to color information as the press is in motion, leading to significant time and material waste reduction.

“It can take a picture of each sheet as it’s coming through and the pressman can see on his screen what each sheet looks like,” Peterson says. “This becomes significant when the press is running at over 15,000 sheets per hour.”

On the creative side of the business, Peterson explains that with all of the technological advancements occurring in offset printing, it’s an exciting time to help introduce new packaging innovations to brands seeking to do something unique. However, he says that part of the challenge is in ensuring that any new printing or embellishment being done on press will not negatively impact the package down the line.

For example, he explains that as more coatings become available to provide different tactile elements on paperboard, the company needs to be cognizant of how that impacts cartons being loaded into other machines in the process. A leathery coating, he says, can cause significant friction between cartons and cause them to “climb,” rather than filing into a machine smoothly.

Peterson adds that as brands continue to seek out new methods of standing out to consumers, the latest innovations in offset printing will continue to be of service. Brands are always looking for creativity, he says, and printers investing in ways to provide it will be at an advantage.