While the Kodak name is well-known and steeped in history, most view it more in the past tense than in the future tense. A recent demonstration of new Kodak printing technologies, held at the company’s Dayton, Ohio, facility, demonstrated that the company, under the guidance of Kodak Executive Chairman and CEO Jim Continenza, is pushing forward with a revitalized direction and a renewed focus, toward a larger presence in commercial applications, flexible and folded container packaging, and small signage.

About the company’s recent past, under different leadership, Continenza says the company, “had clearly lost its way,” and that he has had to figure out where the company is going, moving forward. Part of this focus, he says, is in bringing Kodak back to its core competencies as a manufacturer of advanced materials and chemicals. In the development of its new printing technologies, he says, Kodak made strong use of the last few years, even amid the challenges of COVID-19 and ongoing disruptions to the supply chain, to forge a new direction.

Randy Vandagriff, Senior VP, Print & Vice President, who has been with Kodak for more than 40 years and has focused strongly on inkjet development, spoke of the company’s efforts to build out its digital printing portfolio. “We know that’s where the future is,” he points out “and that’s where we have to go.”

Driven by Kodak Stream Inkjet Technology, Kodak’s line of inkjet printing systems aims to change the rules of what digital printing can offer and change the metrics by which printers and converters compare digital and analog printing solutions. 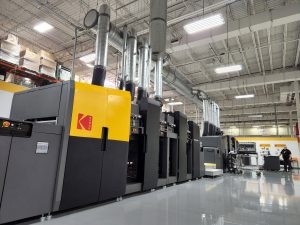 Prosper 7000 Turbo
Touted by the Kodak team as “the world’s fastest digital press,” the new Prosper 7000 press is a four-color, high-production web inkjet system aimed directly toward commercial, publishing, and newspaper printing applications. Running at a top throughput speed of 1,345 feet per minute (fpm) – 35% percent faster than previous Prosper presses – and offering three printing modes, the press offers exceptional image quality, according to Vandagriff. The perfecting press features a maximum web width of 25.5˝ and can handle a wide range of coated and uncoated stocks, including specialty and recycled papers. It uses Kodak’s water-based nanoparticulate pigment inks, which offer a wide color gamut and efficient drying – using near infrared technology – even at peak print speeds.

Prosper 520
Offering print speed, at highest quality, of 500 fpm, Kodak’s Prosper 520 perfecting web inkjet press, has a current install base of roughly 80 units. Like the faster Prosper 7000 Turbo, the 520 can handle a wide range of coated and uncoated stocks, as well as newsprint, and features numerous options including pre- and post-coating, auto-splicing, and roll-to-sheet capabilities. The 520 also features nanoparticulate aqueous pigment inks and near infrared drying.

Uteco Sapphire Evo Wide
Designed specifically to meet the needs of the flexible packaging segment, the Uteco Sapphire Evo Wide is an inkjet system that currently features a print width of 49˝ , but can be scaled up to 96˝. It can handle a wide variety of plastic films ranging in gauge from 44-480, and is easier to use than a traditional flexographic line, thus helping solve a labor challenge facing many converters today. The system can print up to 984 fpm on paper and 656 fpm on plastic substrates, and uses water-based inks certified for indirect food contact. The system maximizes the possibilities of digital production for flexible packaging, allowing for faster response, effective versioning, and access to just-in-time printing approaches. 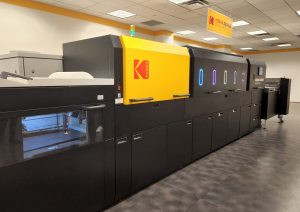 Ascend
In describing the new Kodak Ascend digital press, which features five color stations and access to a growing variety of Kodachrome embellishment inks, Diaz said the system can be used to create raised finishes and spot coating including opaque white inks. In so doing, he says, PSPs can offer greater levels of customization. Further, the system is designed to facilitate simplified foiling – a meltable adhesive toner is applied at the same time as the other colors, saving time and minimizing technical challenges. Finally, a strong advantage of the new press, Diaz adds, is the development of a straight print path. This allows for effective printing onto paperboard for packaging applications, and for signage of up to 14x48˝, and up to 30-pt. thickness, even if the substrate if quite rigid.

Nexfinity
The Kodak Nexfinity digital press has a stronger focus on commercial printing applications, and also features access to a large library of embellishment inks, which can be changed out quickly and easily, and allow printers to hit very challenging colors (e.g., reflex blue) with aplomb. It also features Kodak Light Black HD ink in its fifth ink position, which offers improvements in color and tonality. The machine offers a print length of up to 51˝ and can handle paper thicknesses up to 24-pt. and synthetic papers up to 14 mil. This broad substrate diversity increases the possibilities for print.

Both systems, Diaz notes, are designed to handle the rigors of print production, saying they are sturdily built from end to end.

Kodak’s Patrick Kerr, product manager for cloud solutions, described recent changes to the company’s well-known MIS software, Prinergy, which has followed the lead of other software by taking advantage of cloud-based computing approaches. Jim Tomblinson, VP of operations at Modern Litho (Jefferson City, Missouri), shared how — as a beta testing site for the upgraded software — his company was able to increase the efficiency of its processes, better manage customer connections, increase data security, and gain system redundancy in the event of internet outages. A long-time Prinergy user, Tomblinson, whose company is the first to go live with the updated system, says, “We don’t change vendors easily – there has to be a good reason.” About this new system, he adds “This will be big for us.”

With big moves come big expectations, and the expectations Jim Continenza holds for Kodak, as it serves the printing industry, are high. He believes that the path ahead is strong, and has been made so by those who use the products, or will choose to purchase them. “Everything we build is for the customer,” he says.