When Keystone Folding Box Co fell into the hands of Wade Hartman’s grandfather, he may not have foreseen, several decades later, being the healthcare packaging leader that it is today. The company, which was left in part to the Hartman family in an inheritance following the death of the prior owner, is now 100% owned by Wade.

Wade’s story with the company begins in 1994, working with their newly implemented CAD system. By this time, the company was already enjoying consistent growth, with a reputation for quality packaging supported by reliable machinery.

“It was my job to bring the company forward, from a good old-fashioned traditional folding carton company into an information technology era,” Hartman explains. “They [Keystone staff] knew where the computer was and they knew how to turn it on, but that was it. My background involved a tremendous amount of CAD work, so it was a natural fit for both parties.”

Hartman continued to pay his dues at the family business until he took a controlling interest in 2006 and formally took over the company in 2009. His storied history with the company is impossible to separate from BOBST machines. As he explains, “When I joined the company, all of our die cutting was BOBST. Our newest die cutter [at the time] was bought in 1990 – an SP102-E. It was the first die cutter manufactured in the United States. We still have that die cutter today and it’s still in operation.

“BOBST is one of the few companies that hasn’t cheapened up the equipment. One of the reasons that we maintain that relationship is you get what you pay for in terms of the longevity of BOBST equipment.” 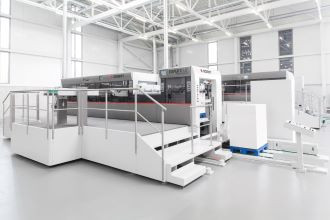 For the entirety of his nearly 30 years with Keystone, the business has trusted BOBST’s expertise to provide the throughput and quality required to tackle short-run jobs. Keystone operates as something of an outlier in the packaging industry – it is “a different egg”, as Hartman puts it – that fills two particular needs for high-end healthcare brands. Its focus is strictly on high quality materials and packaging, sourced and converted quickly.

“What we do is find customers that demand the highest quality and the ridiculous turnaround times that nobody else wants to touch. We maintain the equipment at just that little bit of an extra edge so that we can get those extra jobs off. We need the highest quality for these incredible, intricate designs.”

This commitment to high quality packaging delivered quickly has produced consistent, reliable growth for Keystone. When Hartman began on the CAD team, the business expanded its annual sales by an impressive five times. Thanks to the capabilities of their BOBST machinery, he is optimistic about the future as Keystone continues to forge its own path as a premium just-in-time converter.

“We tend to try and fly under the radar of the rest of the industry,” he says. “A theme that I see reoccurring is that companies grow until they get so big that they’re no longer as nimble and flexible as we tend to be. With our agile press, we can augment the things the big commodity market is missing.”

As part of these plans for the future, Keystone recently added a BOBST EXPERTCUT 106 PER3.0 to their factory floor. It is clear that Hartman trusts BOBST machinery implicitly to deliver continued growth for his business and rapid turnarounds for his customers. “I bought the 106 PER knowing that, ultimately, I wasn’t going to have to pay for it. It was going to pay for itself in action utilization,” he adds, with obvious enthusiasm for the machine and its performance. ​

“I don’t just look at a machine and see the maximum sheets per hour numbers. Am I actually going to get that in a real production scenario? When we look at the average real world run sheets per hour, that’s where a BOBST machine really starts to excel.

“It analyzes every sheet and corrects for any misregistered printing errors while drastically minimizing the number of stops occurring on the feedtable due to misaligned or warped sheets. ​ Any stoppages on the feedtable would force the operator to spend time clearing the table. If you have a number of stops per hour on a difficult job, you could have 20% downtime. This machine takes that 20% and makes it near zero.”

Through the continued chaos of the pandemic and the post-pandemic supply chain, it is clear that the reliability of BOBST equipment provided a valuable constant for Keystone. He finishes with a story that reveals a genuine affection for the machines that have been the bedrock of his family business for his entire tenure.

“When I actually met Bobst’s CEO, Jean Pascal Bobst, I mentioned something to him. He may not remember this but I would love to remind him when I see him again. When I saw the 106 PER, I told him ‘You should have saved some of these features for the next one! How are your engineers going to better (improve) what you’re doing here? I can’t think of a thing you could have done better. You’re done now.’

“Jean Pascal Bobst’s response was, ‘we’re never done.’ And that’s BOBST, to me. They put in everything they can because it means they’ll put out the absolute best piece of equipment they can. “Innovation means high risks and sometimes failure, we cannot always implement the best innovation in a very tough packaging industrial environment with the level of success expected.”