There was something particularly striking about walking into the Heidelberg hall at drupa 2016. Typically, the entirety of Hall 1 is dedicated to Heidelberg equipment, and for the most part, that was the case at this drupa. But, there were several other brand logos situated around the room — Gallus, Masterwork and Polar, to name a few.

This change in direction for one of the most well-established names in printing demonstrated a new school of thought in a broadening industry. As digital and analog worlds collide, finishing becomes a more important part of the process and personalization becomes paramount in packaging, no one company can do everything. Finding the right partner can provide the missing link in bringing a truly disruptive product to market.

As the industry perception of digital printing shifts from being a potential replacement for conventional printing to a complementary technology, it’s interesting to see digital and conventional suppliers joining forces on hybrid solutions.

Heidelberg has been among the conventional standbys taking this approach — particularly in the packaging segment — and included a folding carton and label press in its hall, which featured contributions from industry partners.

The most prominently displayed press was the Heidelberg Primefire 106, the B1 press with Fujifilm’s drop-on-demand inkjet technology. It didn’t take long for the excitement surrounding Heidelberg’s foray into digital packaging to lead to sales, which includes a sale to Warneke Paper Box, a Denver-based folding carton converter, making it the first U.S. location with a Primefire.

The Heidelberg hall also featured the Gallus Labelfire 340, which was first released at Labelexpo 2015. This press, which came about through Heidelberg’s acquisition of Gallus, combines the strong backing of Heidelberg, the flexographic expertise of Gallus and digital technology from Fujifilm. 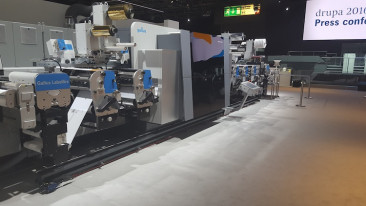 The Gallus Labelfire 340 on display in the Heidelberg hall.

During drupa, Ferdinand Rüesch, VP of the Gallus board of directors, explained that the Labelfire 340 is the embodiment of what he envisioned when he spearheaded Gallus’s transition to a Heidelberg company. He explains that through the partnership, Gallus is now able to reach out to its customers more easily and receive feedback about their needs. The combination of Heidelberg, Gallus and Fujifilm on the Labelfire 340, Rüesch says, resulted in the three entities coming together with the common goal of improving their customer’s production experience.

“With this, it’s all one family and all one goal,” Rüesch said.

KBA provided another example of an offset supplier with a forward thinking approach. The company already announced its partnership with HP in December 2015 on the HP PageWide T1100S digital press for corrugated, but decided to enter a more familiar space in time for drupa.

The KBA VariJET 106 Powered by Xerox provided an example of conventional and digital suppliers joining forces.

In a press release, Ralf Sammeck, CEO of KBA Sheetfed Solutions, explained that the press is the result of two expert companies in their respective fields sharing their skills to create a desired solution for their customers.

“As a leader in packaging printing, our customers are confirming that this is exactly the product they need for the market opportunity that exists,” he said. “Xerox’s inkjet technology coupled with our packaging expertise combines proven technologies to bring the right product to market at the right time.”

Komori and Konica Minolta also furthered their partnership. The KM-1/IS29 inkjet press was first showcased in 2013. In a pre-drupa press release, Komori announced the show would mark the beginning of its regular sales of the 29˝ UV inkjet Impremia IS29, which is suitable for packaging substrates.

It’s interesting to see how these companies that were once considered competitors when digital came on the scene are now lending a hand and offering assistance to one another. It seems that digital press suppliers know that it’s their time to break into packaging, but reaching the market will require going through the conventional suppliers that are so firmly entrenched in the industry.

Likewise, conventional suppliers have come around to the concept of digital printing being an integral part of packaging’s future. And if they want to stay ahead, it’s best to tap into the knowledge that’s already out there and available.