If there’s one aspect of HP Indigo’s Label and Packaging division to be most proud of, it’s its research and development initiatives, says Steve Powers, director of the Label and Packaging division in North America. The company’s strength in R&D, he explains, is what has led to HP Indigo’s launch of several digital presses and software solutions, which can run a variety of substrates with impressive quality.

At its recent HP Indigo Thrive Event, held August 6-7 near Cincinnati, prospective HP Indigo customers and industry partners learned the latest on the company’s numerous offerings for the label, flexible packaging, and folding carton segments, along with its emerging digital embellishment capabilities. 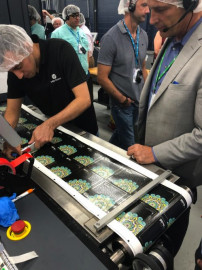 During a tour of ILS, attendees got an up-close look at the HP Indigo GEM digital embellishment unit and samples it has produced. Image courtesy of HP.

Powers explained that approximately 8,000 HP Indigo digital presses are installed worldwide, with about 30% of them serving label and packaging printers. However, even with this sizable install base, few converters have embraced the technology to the degree of Innovative Labeling Solutions (ILS). The Hamilton, Ohio-based company, which opened its doors in 1996, hosted a tour on August 7 as part of the Thrive event. Under one roof, visitors were able to get up close glimpses at ILS’s multiple HP Indigo presses, which include the HP Indigo 8000, HP Indigo 20000, and HP Indigo 6900 with an in-line GEM digital embellishment unit.

Jay Dollries, owner of ILS, says that when the company first started in 1996, it was a traditional flexographic label shop. However, after it installed its first HP Indigo digital press in 2005, it quickly caught on to the advantages of digital and currently produces approximately 80% of its output digitally.

“We saw an opportunity for digital and used that opportunity to expand into new markets,” Dollries said during a panel discussion during the Thrive event. “Why the business has taken off on the digital side is because there is much more we can offer brands.”

Two other HP Indigo users joined Dollries on the panel to share their experiences as well. Gerald Chang, managing partner of Vancouver, British Columbia-based Summit Labels, and Neil Sidrane, president of K. Sidrane in Farmingdale, N.Y., each discussed their company’s digital strategy and their decisions to invest in HP Indigo equipment.

Summit Labels, Chang said, was drawn toward HP Indigo in part because of the company’s culture and how it aligned with Summit’s. For example, he said that the relationship between the two companies is a true partnership, and should Summit need any service to its equipment, a technician is located a quick 20 minutes away. For Sidrane, it was HP’s expertise in digital printing that attracted his company to HP Indigo equipment. He advised those in attendance that when investing in digital printing equipment, it’s important to work with a leader in the field.

“The great thing with HP is the innovation of technology,” Sidrane said. “These are things you’re not going to get unless you have the expertise behind you.”

In addition to the ILS facility tour and user panel, the event featured multiple presentations on the company’s latest technology from HP Indigo executives, along with a keynote address from Mike Ferrari, president of digital package printing consulting firm Ferrari Innovation Solutions, who also spent more than 30 years with Procter & Gamble.

In his keynote, Ferrari outlined several market drivers that are making digital printing increasingly important for converters and brands to consider. In particular, Ferrari explained that consumer behavior has changed substantially in recent years, especially since smartphones have become nearly ubiquitous worldwide. Prior to the advent of the mobile phone, brands had more control in the marketplace, Ferrari explained, and for the most part, consumers were subjected to what brands dictated in terms of products and services.

However, as connectivity has become a 24/7 reality, the balance of power has shifted to the consumer, with shoppers now able to communicate directly with brands and express their desires. As brands are increasingly in need of serving the varied desires of their target consumers, digital printing’s ability to produce shorter runs of more SKUs has proven to be highly beneficial. Additionally, digital printing’s ability to increase product security and speed to market have made it increasingly attractive for converters and brands. 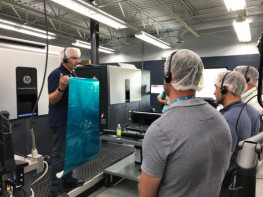 “Today, we want all the flavors and that’s part of the reason why SKU proliferation is going through the roof,” Ferrari said. “Brands are trying to reach the heart of the consumer and that’s how you separate them from their money.”

Beyond utilizing digital printing for its strength in boosting efficiencies needed to compete in an evolving packaging landscape, Ferrari detailed digital’s ability to personalize a consumer’s experience with a brand. For example, Ferrari said that leveraging the power of social media can be a strong strategy for brands, highlighting an initiative in which Lay’s utilized digital printing to produce potato chip bags adorned with photos consumers uploaded to Instagram.

“Keep in mind this not our father’s old business,” Ferrari said. “Shoppers have changed and it’s changed everything about us. There are new forms of engagement.”

“It’s the most robust press with respect to the number of inks and substrates it can run,” Holloway said. “Most people are buying it for pressure sensitive, but customers are running shrink sleeve on the press and narrow web flexible packaging.” 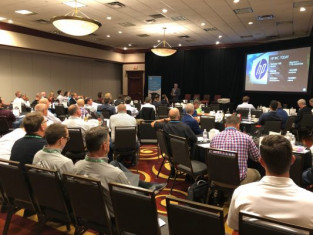 With a theme of "Let's Thrive Together," HP Indigo's Label and Packaging division hosted a Thrive event near Cincinnati for prospective customers and industry partners. Image courtesy of HP.

But what Holloway said makes HP Indigo stand out in a continuously growing field of digital packaging press providers is its ability to provide equipment tailored toward specific packaging needs. Printers are seeking opportunities to diversify, and with its array of digital solutions, HP Indigo can present a path for label printers looking into flexible packaging, or commercial printers seeking packaging growth, for example.

“What makes HP different,” he said, “is that we don’t have one press to solve all needs. We have a broad portfolio that allows us to address a wide array of applications.”