To sign up to participate in Faces Behind Masks, visit behindmasks.org.

As a longtime innovator in the world of digital printing and connected packaging, Rafi Albo has been at the helm of numerous creative initiatives. But, he says, it’s not every day that an opportunity to use digital print to improve human wellbeing presents itself. That’s what happened however, when Albo founded Faces Behind Masks, a nonprofit organization that connects digital printing companies with hospitals, providing medical professionals with highly-visible stickers complete with an image of their face, that they can adhere to their personal protective equipment (PPE) while at work.

With the COVID-19 pandemic still wreaking havoc around the world, doctors, nurses, and other medical professionals have had to keep their faces hidden behind masks while on the job, limiting the personal touch that’s so needed in health care. While a stay in the hospital can be an anxious experience, not having the ability to see a caretaker’s face can add further to the patient’s stress.

“With these big 8x6” stickers, the patient smiles because they can see who they are talking to,” Albo says.

A Call for Help Leads to a Global Launch

It was 1 a.m. and Albo was in bed when he saw the call for help come across his phone. 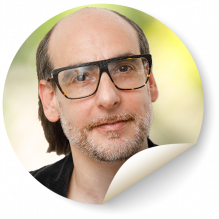 Unable to sleep, cell phone in hand, he was scrolling through social media, liking posts that caught his eye. But as he browsed through his Facebook feed, one post stopped him in his tracks – a post that called for attention beyond a simple like or comment. It was a post that inspired Albo to take action.

The post was from a 29-year-old Israeli student named Matan Rose, describing a vision he and a group of other students had of creating a way in which medical professionals could adhere large photos of their faces directly onto their PPE, while tending to patients amidst the COVID-19 pandemic. Albo, a Tel Aviv native and global creative director and head of connected packaging for CCL Industries, thought back on the more than 10 years he led an agency that specialized in projects that intersected creativity, technology, and printing.

Inspired by the opportunity to comfort patients young and old that have been confined to hospitals during the pandemic, unable to receive visitors, and unable to see the faces of the doctors and nurses caring for them, Albo knew that his specific expertise could help.

He messaged Rose with an introduction and an idea that could help get this initiative off the ground. For a week and a half,  Albo would spend five to six hours per day calling digital printing companies all around Israel, asking for their help. The issue that Rose and the group of students he was working with were facing, was that the neighborhood copy shops they were using to print the stickers could not provide the quantities required to outfit the medical departments in need. The students needed access to printing technology with more firepower.

“I was calling these [digital printing company owners] saying, ‘Listen, you have to hear this. It’s an amazing idea,” Albo says. “We need to give 200 stickers with their face to every [hospital] team member.”

At first, Albo served in a supporting role, providing assistance in more of a background capacity. After spreading the initiative to 11 digital printers in Israel, Albo says he realized the initiative was a true calling, and he vowed to take it worldwide.

With that, Faces Behind Masks was born. At first, the way the process worked was hospital staff would send their photos as PDFs to the printer. Then, the images would be digitally printed, cut, and delivered manually.

The reason such a high quantity of stickers was needed is that due to precautions surrounding the spread of COVID-19, the stickers are designed for one-time use. In case they get contaminated over the course of a shift, a doctor or nurse will need to be able to dispose of it and replace it with a fresh sticker. 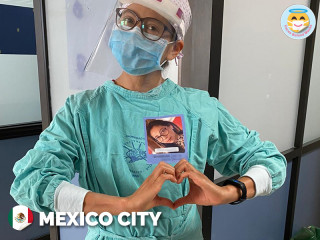 Faces Behind Masks has helped distribute stickers in several countries, including Mexico.

Beyond the enthusiasm for the initiative, Albo found that these digital printing executives were willing to print and donate far more stickers than were even being requested. One pledged to produce 20,000. Then another offered 40,000. A third volunteered to pitch in 80,000.

While this worked well to start, Albo says that a mission of this magnitude would need to scale up and spread around the world, giving medical professionals a sense of their identities back, while helping patients feel more comfortable while they were in the hospital.

As he racked his brain thinking of how to grow Faces Behind Masks, Albo says he had an epiphany. XMPie, part of the Xerox Corporation, specializes in creating digital storefronts and could be the solution to connecting hospitals to digital printing companies around the world. So Albo called Eran Baron, GM of XMPie, and shared his idea of creating a global web-to-print portal to serve as the back end of the platform.

Albo described his vision of creating a platform in which the digital printing company can log in and see a digital storefront branded with their logo. That interface can then be shared with a local hospital, who will connect directly to the printer, providing PDF files of staff photos to be printed, cut, and delivered directly to the medical professionals to adhere to their PPE. While the front-facing aspect of the platform is user friendly, developing and launching the back end would be complex, but Albo says XMPie jumped at the opportunity to contribute to the cause.

“I was amazed,” Albo says. “This is the [GM] of a software company during these coronavirus times, who is under pressure with sales quotas and a busy staff. He says, ‘Rafi, this is an amazing initiative. We are in.’”

The Digital Printing Industry Comes Together

With a system in place and a collection of digital printers on board, the Faces Behind Masks initiative quickly began to grow. Throughout the build up and launch of the program, Albo says the support he received from countless volunteers has been inspiring and essential to the initiative’s success.

He points toward the promotional video the team filmed as an example. Backed by the belief in the program’s benefits, Albo says the volunteer crew received special clearance to film inside a hospital in Israel, with real doctors and nurses participating in the shoot. He says he was particularly amazed when in need of an actor to portray a hospitalized patient, Natalie Broyer, the art director for XMPie who worked on the initiative, had her 82-year-old father come in to play the role.

“With everything you see in this project, you don’t have any commercial factor,” Albo says.

While the project could not have come together without the help of a dedicated team, Albo says that it also would have been a near impossibility without the expanding availability of digital printing. With the variability needed in the jobs being produced, along with the flexibility to change up designs, logos, and photos, the quick setups and lack of plates in the digital process lends itself perfectly to Faces Behind Masks.

Albo says that the platform is flexible as well, and that any digital print technology in nearly all formats will work. The only parameters are that the resulting printouts are 8x6” and printed on an adhesive substrate.

And since the initiative has launched, Albo says it has quickly caught on around the world. Though it started small in Israel, Faces Behind Masks has since expanded across multiple continents, with printers signing on from countries including Poland, Mexico, Canada, Brazil, among others. 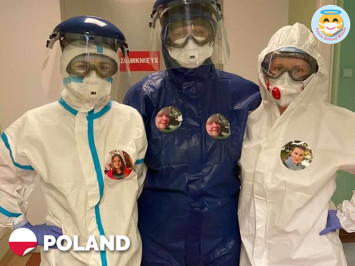 Medical professionals in Poland display their Faces Behind Masks stickers on their PPE.

As printers and hospitals adopt the Faces Behind Masks initiative, it has helped put patients at ease – whether they are COVID-19 patients or being treated for another condition. Seeing a smiling, reassuring face from a doctor or nurse can be immediately uplifting, but with masks required in all areas of hospitals, it has taken that personal touch away.

But it’s not just the patients who are benefiting from the program, Albo says, explaining that he has heard from doctors and nurses within some of the hospitals that have participated in Faces Behind Masks. They have told them it has brought a sense of humanity back to their work lives, in which they’ve had their face covered for months. Even something as simple as recognizing their coworkers in the hallways has gone a long way in easing the daily struggle of life in a hospital amidst a pandemic.

“When we delivered to the hospital, the nurses and doctors felt human again,” Albo says. “When giving medical treatment to a patient … you need the personal contact with the patient, especially with children and the elderly.”

Additionally, Faces Behind Masks is seeking Print Industry and Medical Community Ambassadors, who can spread the word about the initiative among their local digital printing and medical communities. To apply to become an ambassador, email ambassador@behindmasks.org.

Cory Francer is an analyst at NAPCO Research. He formerly served as editor-in-chief of our sister publication, Packaging Impressions.

Be Sure to Take a #LookAtRicoh at PRINTING United