How AMGRAPH Goes Beyond Green

Backed by clean energy and an environmental conscience, AMGRAPH takes a sustainable approach to flexible packaging.

Businesses are generally expected to be good corporate citizens, striving to reduce their environmental impact. But, when people first learn about the sustainability efforts of Baltic, Conn.-based AMGRAPH, president and CEO Kenneth A. Fontaine says they often react in amazement with their jaws dropped.

Since AMGRAPH’s founding in 1984 by Fontaine’s father, Kenneth L. Fontaine, the company has made environmental practices a top priority. Since the younger Fontaine took over the presidency more than a decade ago, he has been determined to carry on the company’s green legacy.

“We always did it because we thought it was the right thing to do,” Fontaine says. “It has been part of our DNA and our makeup of who we are, rather than something we were being told to do. Right from my father, he instilled that here in the culture.”

Prior to founding AMGRAPH, Fontaine’s father worked as the head of sales for the packaging division of Amstar Domino Sugar, a sugar refinery that produced its own packaging, along with packaging for outside customers. In 1983, the company was acquired in a leveraged buyout and Fontaine says its owners sought to spin off the packaging division. 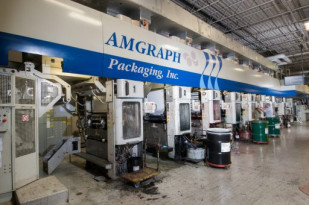 AMGRAPH offers a variety of printing processes and manufactures its own packaging structures.

He says his father bought the company the following year and began to lay the foundation for what the company would evolve into today. On the environmental end, AMGRAPH was among the first converters to implement electron beam curing, and it opted to solely run water-based inks.

Additionally, Fontaine says at the time his father started the company, private label supermarkets were just beginning to launch their individual store brands. AMGRAPH jumped at the new business, becoming a specialist in the short runs these brands required, which it still leverages as one of its biggest strengths today.

Though it was already a leader in sustainable package printing, when AMGRAPH began an expansion project in 2009, Fontaine says he wanted to take the company’s environmental practices to the next level with alternative energy.

First, he says the company looked at wind power. While wind would have provided ample energy to run the plant, there were concerns over potential community pushback from windmill installation, along with limitations on how many windmills could be installed within the company’s land footprint.

Then, Fontaine says he decided to check into solar power. But, he says that plan was scrapped after he realized solar could only provide about 10% of the power AMGRAPH needed.

After going back to the drawing board, Fontaine says he came across a fuel cell system that could power the packaging plant. At first, he says AMGRAPH couldn’t justify the cost of the fuel cells, but after extensive conversations with the local power company, Fontaine says AMGRAPH worked out a plan where it could sell energy credits provided by its clean energy back to the power company.

With the cost offset by this energy buyback initiative, AMGRAPH installed two fuel cells in March of 2016, which provide 100% of the company’s energy, instead of it being drawn from the grid. Plus, the cells produce more than 60% of its domestic and process heat. The environmental impact results in annual reduction of 1,316 metric tons of carbon dioxide and 4,764,000 gallons of water. 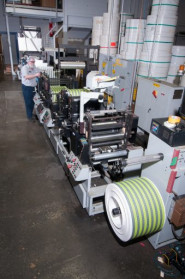 Dave Buchan, an AMGRAPH employee of 35 years, makes adjustments on a flexo press.

“They save 7.2 Olympic swimming pools of water every year,” Fontaine states. “It’s [equivalent to] taking about 103 cars off the road every year because of a lack of emissions. They’re very positive for the environment and they return a small operating profit.”

Fontaine says this latest investment in the environment has also been beneficial for business. As many brands continue to tout sustainability as a top priority, AMGRAPH’s clean energy can often be the deciding factor in their package printing decision.

“If they’re operating with more of a green approach to their business, sometimes that’s the fact that can tip the scale in your favor,” he says.

A Printing Triple Threat In addition to its sustainable aspects standing out from its competition, AMGRAPH’s array of printing capabilities is also a rarity. The company currently operates six presses, but is one of only a few that features web offset, rotogravure and flexography under one roof.

Fontaine explains that the markets the company serves tend to have different needs from a cost, speed and graphical quality perspective. Having all three technologies in-house, he says, provides the ability to run various packaging jobs on the press it is best suited for.

“It allows you to be very honest with your customers because you don’t have to lean them into one of the technologies because it’s all you employ,” Fontaine says. “We find the right technology that will meet our end customers’ needs.”

For example, Fontaine explains that the low tooling costs of offset printing make AMGRAPH’s two Stevens presses and one Hamilton press well-suited for short- run work or for brands that print a wide range of SKUs. Gravure, on the other hand, provides the highest level of stability and print quality.

While gravure is not quite as prominent in North America as it once was, Fontaine says the company’s two Rotomec presses have allowed it to take on a large portion of the chewing tobacco pouch market, in which many brand owners demand gravure. 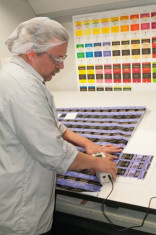 Currently, AMGRAPH operates one flexo press — an in-line Propheteer. However, in February, the company signed on to purchase a new 10-color CI flexo press, which it will install in its new facility, along with laminating, cold seal and finishing capabilities. Michael Drab, AMGRAPH’s VP of sales and marketing, explains that the tea industry provides a large percentage of the company’s business and the flexographic press is a great option to produce tea tags, along with shorter runs in other market segments.

Fontaine explains that the company will remain committed to operating all three technologies, and is excited to broaden the scope of AMGRAPH’s flexo capabilities with the new CI press.

“Whatever our markets need, we buy,” he says. “We plan to continue with all three — they work well for different things.”

A Footprint in Multiple Markets

While its three printing technologies allow AMGRAPH to serve several target markets, its ability to manufacture its own packaging structures also makes it easier for the company to transition to new market segments. 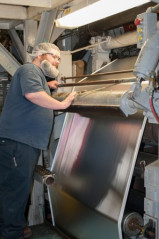 Kyle Marshall, an AMGRAPH employee for nearly 12 years, inspects the web during a quality check that occurs in the extrusion process.

“Because we make our own structures — we’re not buying from a third party — we can pretty much create what’s necessary for the market,” Drab says. “So we strategically looked at where do we want to be and what do we want to invest in terms of satisfying these particular markets?”

Fontaine explains that the majority of market segments AMGRAPH serves are in the food industry, but the company also does business with the lawn care, health and beauty, and pharmaceutical and nutraceutical industries.

He explains that AMGRAPH’s web offset printing capabilities have allowed it to thrive as more brands are expanding their product lines and adding an array of new SKUs. For example, Fontaine explains that the major snack companies that require extremely long-run wide-web print jobs may not be the greatest fit for AMGRAPH’s capabilities. But, he says, food brands with a varied portfolio and a desire to cost-effectively launch new products are a great match for AMGRAPH’s offset presses.

“In the food market, if you have someone who has these broad product flavor offerings, offset really lends itself to allow them to make changes, to introduce items and to get a very high-quality print out at a very low up front cost,” Fontaine says.

Fontaine states that part of the reason AMGRAPH has consistently been so successful in the tea industry is because it has customized its equipment to accommodate for the technological improvements in tea filling machines.

He says as filling machines continually increase their operating speeds, it has become very difficult for package printers and converters to adhere to the specifications and tolerances required by tea packaging. But, AMGRAPH’s specially designed equipment has allowed it to keep up. 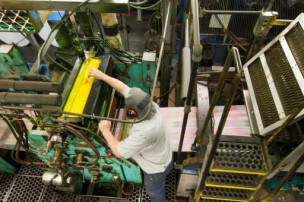 Joel Brown, an AMGRAPH employee of 31 years, adds and spreads ink in an ink pan on one of AMGRAPH’s offset presses.

“We built a whole round of equipment just for the tea industry and that has done wonders for us,” Fontaine says. “Our equipment is custom made to package tea envelopes for printing, laminating and slitting. That piece has really allowed us to grab the lion’s share of the specialty tea market.”

The Growth of Flexible Packaging

As many brands continue to explore flexible packaging and transition their products from rigid packaging to flexible options, Fontaine says this is particularly exciting because of the shipping cost savings, filling machine efficiencies and the print quality flexible packaging provides.

Additionally, he says, as certain types of flexible packages, such as shrink sleeves on cans, continue to gain adoption, it allows printers to provide higher-quality output and for brands to have more flexibility to release new products.

“When they used to print all these cans, it was very difficult to print on uneven surfaces,” Fontaine says. “Now when you print on a shrink sleeve, you design your graphics around the [can] and it’s all computer controlled. You get these amazing graphics, it runs very fast, it’s great for the printer, you’re not printing on an aluminum can and you can put more SKUs out there very easily.” 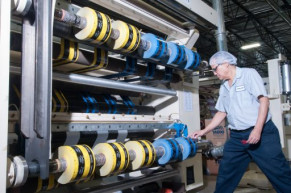 Drab says that he foresees stand up pouches as a steady growth area in flexible packaging. Two years ago, he explains, there was a huge boom of products transitioning to stand-up pouches, which has since tapered off. But, Drab adds he fully expects the stand-up pouch segment to experience consistent growth as more food products, such as breakfast cereals, make the shift.

“Because our inks don’t have solvents, they can go in the ground,” Drab says. “It’s a true, recyclable structure. That’s a big push and you’re going to see more of that coming down in the next three to five years.”

Fontaine says flexible packaging demand can also be attributed to increasing wealth in developing countries, along with the desire among brands and retailers to limit their waste production. With the environmental advantages flexible packaging provides, he says it’s an opportune time for the industry.

“With the demand for packaging, being sustainable and reducing waste where rigid typically has more, it’s just a great story for us flexible packaging converters,” he says. “I just don’t see an end in sight.”

How this Beauty Brand's Folding Cartons Bring Sustainability to the Shower