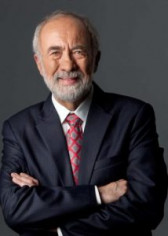 Impossible to overlook at the Landa Nanographic stand at drupa 2016 was the towering pile of glittering scrap foil put there to dramatize the difference between conventional foiling and a new method that Landa was then in the process of inventing.

Now the pile and everything else connected with Landa Nano-Metallography belong to a new owner — a company that Benny Landa, chairman of the Landa Group, describes as “ideally suited” to possess it.

The Landa Group and ALTANA AG announced on February 21 that ALTANA has acquired Landa’s Nano-Metallography technology, a process said to be capable of adding metallic highlights to labels, packages, and other printed items at half the cost of conventional foil stamping. ALTANA, a stakeholder in Landa Digital Printing, will fold the technology into a new company within its ACTEGA Coatings & Sealants division. Terms of the transaction were not disclosed.

Landa Nano-Metallography is an in-line (on-press) process that substitutes nanoscale foil particles for the rolls of foil used in cold- and hot-foil stamping. These methods create scrap when excess foil is pulled away from the non-image area surrounding the portion of the image being metallized. 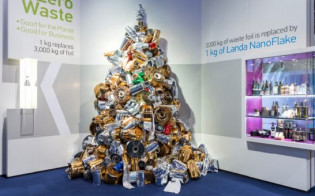 The transfer of particles takes place within a module that dispenses only the amount of metal needed to accent the image — hence Landa’s claims for its “zero waste” and environmental advantages over conventional foil stamping. The module can be mounted on any type of printing press, according to Landa.

A narrow web label press was used for a technology demonstration of the process at drupa, but Landa neither took orders for systems nor sought letters of intent for future purchases. It will now be up to ACTEGA Metal Print GmbH, the newly formed ALTANA company, to complete the development of Landa Nano-Metallography and bring it to market.

In a phone call following the announcement, Benny Landa said that the ALTANA unit would take over the core technology, patents and related assets in an ongoing R&D effort spurred by the “quite fantastic” reception that Nano-Metallography received in its “market validation” at drupa. His personnel will assist in the transition and support the scientific work, but no Landa Group employees will be transferred to ALTANA in connection with the project.

Landa said that one to two years of “exhaustive” development may still lie ahead before ALTANA will be prepared to launch Nano-Metallography as the mature and stable solution that the market expects.

He promised that this would be done with the full cooperation of the Landa Group technologists who invented the process: “As long as we can continue to contribute, we will.”

Asked whether he thought ALTANA could commercialize the process faster than the company that had invented it, Landa replied that time-to-market wasn’t the issue or a factor in his decision to sell. The question, he said, “is who is the best owner of the technology?” — a distinction he firmly believes ALTANA can lay claim to.

Samples of products produced with Landa Metallography on display.

Its ACTEGA Coatings & Sealants division, he pointed out, is deeply embedded in the graphic arts industry as a supplier of inks, coatings, primers and pressroom chemistries. Another division, ECKART Effect Pigments, is a leading international source of metallic and special-effects inks for conventional and digital printing processes.

This explains why “the stars lined up” behind ALTANA’s acquisition of Nano-Metallography, Landa said. He also noted that transferring ownership leaves the Landa Group freer to concentrate on nanographic digital printing, its marquee business. While metallization adds value, Landa said, it’s essentially an analog process and thus not part of the group’s primary focus.

Nevertheless, he’ll be keeping a watchful eye on what ALTANA does with his creation, one of a number of innovations arising from the Landa Group’s quest to find practical uses for nanoparticles. Landa believes that, thanks to its economy and simplicity, the process eventually will replace other methods of adding metallic highlights to printed items, especially packaging and labels. 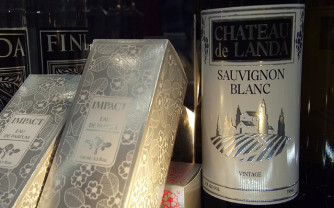 Another sample of a product that features Landa Metallography.

The latter, he said, is the “low hanging fruit” of applications for Nano-Metallography, and promoting the process for label printing was the reason for demonstrating it on a narrow web press at drupa. Landa expects ALTANA to continue to pursue the opportunity.

Landa also thinks that ALTANA will share his predilection for executing on a large scale. “We do not touch niche markets,” he said of the operating philosophy of the Landa Group. “We have found that it costs as much to develop technologies for small markets as for large ones.”

Although the Landa Group will cede ownership and control of Nano-Metallography to ALTANA, the partnership keeps the process more or less in the family. ALTANA, a €2 billion international supplier of specialty chemicals, became a minority stakeholder in Landa Digital Printing by investing €100 million in the division in 2014. The two companies continue to “invest massively” in the development of nanographic printing systems, Landa said.

The Target Report: Tracking the Consolidation of Industry Trade Associations

Reimagining M&A in These Unprecedented Times

SGIA and PIA Merge to Become the Largest, Most Comprehensive Printing and Graphic Arts Association in the Country
Comments
COVID-19 Resource Channel