On the opening day of the Flexographic Technical Association’s (FTA) annual Forum, Steve Smiley, a consultant to the graphic arts industry and member of the FTA Hall of Fame, expressed his amazement at how advanced flexographic printing has become in the past few years.

As recently as 2012, flexo faced limitations, Smiley noted, pointing out the quality issues that had previously been considered a drawback of the process. But now, Smiley said, there’s very little that flexography is not capable of.

“We have gone so far beyond what we were doing when I started 30 years ago,” he said. “Today, we have great solids, we have higher chromas, fine detail and in-line workflows.” 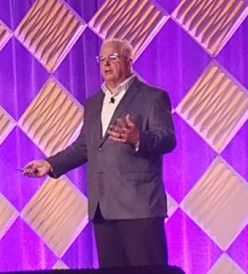 Michael John of 3M leads a presentation during the FTA Forum.

Smiley’s praising of flexo’s advancements came as he introduced the aptly titled panel presentation “Best Print Technology on the Planet,” which featured five brand representatives answering questions via video recording about their experiences with flexo and expectations for packaging.

While the panelists all represented varying brands, one commonality among the group was the value placed on color accuracy and consistency. For example, Kevin Chop, principal packaging graphics of innovation and R&D for Diageo North America, explained that consistent color is imperative in maintaining a brand.

“If you consider color to be a brand asset, you want it to be managed and controlled,” he said.

Likewise, Karen Daniels, graphic production manager for Basic American Foods, the parent company of food brands including Hungry Jack, Idaho Spuds and Modern Table, stated that brand color is among her top priorities. And with a line of products packaged in folding cartons, flexible packaging and corrugated shippers, it can be challenging to ensure consistency across the board.

The overarching reason behind the importance of color consistency is in how consumers perceive a brand, Michael John, lead design operations print quality manager for the consumer business group at 3M Design, added.

“I represent some of the most iconic brands in the world and I have to make sure when they’re on shelf, it looks like they come from the same place,” John said.

While the impact of flexo’s latest advancements was a key theme throughout the Forum, the event also provided a glimpse of flexo’s future — showcasing emerging technologies and capabilities, along with the young people poised to become the industry’s next leaders.

In a session titled “Flexo Boldly Goes Where No Process Has Gone Before,” technology that once seemed futuristic — printing invisible barcodes, three-dimensional special effects, and micro-LED lights — was brought to life.

Kicking off the session, Derek Awalt and Kristyn Falkenstern of Digimarc, detailed how their company’s technology can provide increased security for retailers and brands, and enhance the visual appeal of a package.

For example, Awalt explained one of the most substantial sources of lost inventory for retailers stems from large packages like bottled water cases and pet food bags not being scanned at checkout. Consumers often place these packages — many of which are printed flexographically — at the bottom of their shopping carts, making them easily overlooked by cashiers. 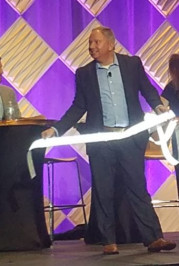 Doug Weiss of Kodak shows off a roll of printed lights during the FTA Forum.

However, by implementing the Digimarc Barcode, which can imperceptibly repeat UPC data throughout the package, an item that may have previously gone unscanned, can be automatically detected and send data to the cash register.

In addition to package security, flexographically printed embellishments were a highlight of the session. William Ray of NthDegree and Alexandra Hartman of Printed Energy, demonstrated their companies’ advancements in printed electronics, including the printing of LED light.

Meanwhile, Tom Baran and Matt Hirsch of Lumii, demonstrated the holographic and three-dimensional effects their company is adding to traditional flexographic print. In a real-life example, Baran showcased the work Lumii has done for Portico Brewing Co., a craft brewer based in the Boston area.

Baran explained how through the use of specific algorithms, Lumii was able to embellish Portico’s shrink sleeves with a triangular pattern that seems to shift its color as the can is rotated, helping the product stand out in the crowded craft beer space.

“The idea is you should be able to take a flexo press and the ink you’re using and create holographic effects,” Baran said.

In a subsequent session held on Tuesday, May 7, several student presenters took the stage to highlight the flexographic research and projects they’ve completed. Presenters included Katherine Treadaway, a Clemson University senior, who shared her research into optimal relief depths of narrow web plates and their impact on fine imagery. Linnea Landgren of Cal Poly presented research on how ink formulation impacts the way color appears in varying lighting conditions, and Emily Anderson, also of Cal Poly, showcased her research into flexographic printing of soft-touch coatings, and the impact of various anilox rolls and tint or coating sleeves.

In an FTA Forum first, another student presentation was delivered by the winning team from the 2019 Phoenix Challenge College Competition. This year, the top honor went to University of Wisconsin-Stout, which worked with a local bakery to redesign its branding and produce a variety of packaging.

On Sunday, May 5, the FTA hosted its annual Awards Banquet, honoring people, companies and products that have had a significant impact on the flexographic industry. 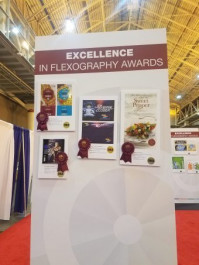 Four of the Best of Show winners from the Excellence in Flexography awards on display at the InfoFlex expo, which was held concurrently with the FTA Forum.

One of the association’s most prestigious honors, induction to the FTA Hall of Fame, went to Dave Nieman, president and CEO of All Printing Resources, a Glendale Heights, Ill.-based provider of flexographic printing products, resources and solutions. According to a press release from the FTA, Nieman served on its board of directors from 2004 to 2010, and has held various positions on multiple councils and committees.

Other individual awards included the FTA President’s Award, which was presented to Katie Graham of Pamarco and Danny Rich of Sun Chemical.

Sustainability Excellence Awards were presented to IGT Global Solutions for its volatile organic compound reduction program, and Comexi for the Life Cycle Analysis of its F2 MC press.

The FTA will reconvene at its annual Fall Conference, scheduled for October 28-30 in Charlotte, N.C.

XSYS Reflects on a Successful 2022