The result of an “exciting journey” was unveiled on Sept. 30, as Domino Digital Printing revealed the N730i, the company’s latest inkjet label press, and the first based on its Generation 7 technology. Broadcasting from the company’s headquarters in Cambridge, U.K., industry journalist Neel Madsen, alongside multiple Domino executives and customers, offered an in depth look at the new digital press. 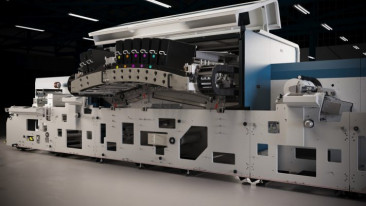 Philip Easton, Domino’s director of digital printing solutions, provided an overview of the N730i’s key specs and features, at the center of which, is the new Bitstar printhead, produced in collaboration with Domino’s parent company, Brother Industries. Easton explained that the Bitstar printhead produces a consistent 1,200 dpi at optimal speeds reaching 230 fpm.

Additionally, he said that the press is configured with a double bar white, which provides 76% opacity. With the new printhead, which utilizes triple layer polycrystalline micro piezo technology, and a combination of the smallest drop sizes (2.1 pl and nominal sizes of 2.8 pl and 3.3 pl), exceptional print quality can be achieved through sharper edges, smoother gradients, and increased accuracy.

But beyond the stats and specs of the new press, attendees heard from the first company that has brought it on board, Olympus Print Group. Adrian Brown, managing director for the label printing company located near Leeds, U.K., said that Olympus has been a longtime user of Domino equipment, having previously installed two of the company’s N610i label presses, based on Domino’s Generation 6 technology.

With an ever increasing demand for high print quality, Brown said that the 1,200 dpi capability of the N730i was a key driver toward bringing on the new press.

“The bar never falls – it always rises in our market,” Brown said. “So, to move into 1,200 dpi was always an evolvement that was going to happen. It’s helping us move into different markets.”

Shrink sleeves are one segment that Brown said Olympus has seen improvements in since bringing the N730i on board. The press’s small drop sizes, he says, can be better controlled during the shrinking process.

While Brown was in the studio to take part in the broadcast, Louise Adcock, global product manager for Domino joined the show from Olympus’s facility to demonstrate the N730i in action. Additionally, she highlighted the layout of the press, which can be outfitted with two flexo stations. A flexo station before the digital engine can support priming applications, while the flexo station after the print engine can take on flood, spot varnish, spot color, or flood white capabilities.

Back in the studio, Julie Cross, Domino’s technical director for digital printing shared some insights into the development process of the N730i. Working in close collaboration with Brother allowed Domino to keep all of the building of the press in house and provided the company with ownership over the process. She explained that reliability was an essential driving factor of the press’s development and as a result, the staff set the press through rigorous testing to ensure customers would have consistent uptime.

“Before the launch, the team had been busy testing over last few months,” Cross said. “We conduct testing on every feature on the press for functionality, ease of use, and reliability. We test in a way that the customer would use it, but this time we pushed it to the limit.”