Digital Storefronts for Labels and Packaging: Not If, but When

The buying habits of label and packaging customers are changing, and new technologies exist to support them. Through online portals, buyers can access the short-run, quick turnaround production services they’re increasingly shopping for.

Packaging and label producers who don’t actively sell through digital storefronts had better get used to the idea of ceding serious market share to those who do.

What producers without portals are failing to appreciate, says Adam Gray, president and CEO of Sheetlabels.com, is the “huge psychological difference in buying behavior” between legacy customers who depend on sales calls and a new generation of clients who need little or no personal interaction with their vendors in order to purchase things from them.

By focusing on the latter group, this young entrepreneur — all of 20 years old when he incorporated Sheetlabels.com in 2006 — has built a source that he says ships more than 10,000 orders per month to a base of 150,000 online customers in every state in the country.

At Roastar, Jessica L. Petersen, sales and marketing manager, says, “we are bursting at the seams in capacity right now” thanks to the volume of orders for digitally printed shelf bags and pouches streaming in through its online portal. The company does nearly all of its business in this way, and Petersen expects the traffic to increase as new features are added to the Roastar interface.

Digital storefronts appeal to customers who are often shut out of the market by the high minimum order quantity (MOQ) requirements and other norms of long-run production. These customers include emerging brands, start-up businesses, creative agencies, and others who need labels and packaging just like everyone else, only not in mass-market quantities.

Sensing opportunity in this underserved segment, Carol Jiang started SoOPAK in 2014 to cater to it. The potential of short-run custom folding production for B2B customers like these, she says, “is huge.” 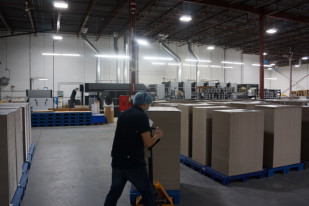 SoOPAK, specializing in custom-printed folding cartons, gets about 70% of its business through its online portal at soopak.com.

Aviv Ratzman says he saw the short-run, Web-to-pack trend starting to emerge both as a former high-ranking executive of HP Indigo and as the co-founder and CEO of Highcon. He points out that the first step in driving the trend is to inform buyers that they actually can order labels and packaging in small quantities, customized to their specifications. He’s encouraging this awareness through Compack, a venture he launched in September of this year.

Compack is a hub for connecting brand owners with online packaging vendors through a website that Ratzman compares with Booking.com. The difference is that instead of shopping for hotel rooms, buyers use Compack’s “comparison engine” to review how well the site’s participating vendors meet their needs: for example, whether they have MOQs; how quickly they can turn jobs around; and whether they offer online graphic design tools.

To list with Compack, says Ratzman, packaging vendors must have existing Web-to-pack capabilities that assure “an amazing experience” for brands and designers seeking short-run packaging — even in quantities as small as one.

Providing that kind of satisfaction in an online portal means optimizing the experience of using it. Jiang notes that above all, obtaining quotes and placing orders should be simple: “one, two, three, not one, two, three, four.” She says this is why her IT team always looks for ways to take steps out of engaging with the SoOPAK portal.

Petersen says Roastar wants its core values — “fast, easy, and pioneering” — also to be reflected in the look, feel, and utility of its portal. There, customers can quickly obtain quotes and samples by choosing bag types and sizes, materials, closure styles, and quantities in a short sequence of clicks.

An approved artwork template for the configured bag is provided along with the quote. “Everything is right there at your fingertips,” Petersen emphasizes. There’ll be even more to like when Roastar adds custom sizing to the list of options, an enhancement that Petersen says will be available soon.

Gray notes that Sheetlabels.com continuously surveys its customers for feedback on how well the site is working for them. One of the things he’s learned is that many of his customers are “very passionate people” when it comes to color matching and proofing, a trend he thinks is on the rise among small-quantity buyers of labels.

Although there are various types of ready-made e-commerce software for printing businesses, these prebuilt solutions may not be optimal for the label and packaging space. As Jiang says of SoOPAK’s niche, “folding carton is a unique industry — every box is different. No one item is identical to another.” As a result, everything designed uniquely has to be quoted individually as well.

Jiang’s IT team initially tried using open-source software for the SoOPAK portal, but found it inadequate. “Shopping center” e-commerce software built around standardized products and pricing wasn’t suitable either: “the logic is not like that” in the custom folding carton business, Jiang observes.

The proprietary solution the team built for SoOPAK from the ground up proved to be the right one. Continuously refined since then, it currently is in its eighth version, according to Jiang.

Petersen says the home-grown approach also worked well for Roastar, which likes the flexibility of being able to customize and update its e-commerce interface whenever it wishes.

Sheetlabels.com has come a long way from its origins in the database that Gray initially built for the website using Microsoft Access. Now the portal, developed and supported by an IT staff of seven, interfaces with PayPal, Amazon.com, and the U.S. Postal Service. No off-the-shelf storefront solution could have provided the functionality and features the site now offers, Gray says. 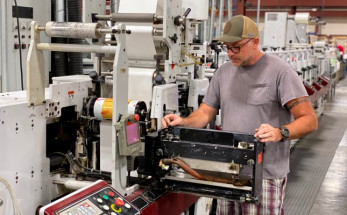 He notes that one advantage of starting from scratch as an e-commerce label supplier lay in not having an existing system to replace. This allowed him to architect everything just as he wanted. However, it also meant being prepared to invest not just in the upfront cost of custom software development, but in the ongoing expense of its maintenance.

This kind of software, Gray points out, is a “living, breathing organism” that needs proper care and feeding if it is to serve its intended purpose.
Another fact of life for online sellers of packaging and labels is that if you build it, they won’t necessarily come — not unless as much effort has been put into promoting the portal as into making it easy for customers to use.

“You have to be No. 1 in Google” and other channels that draw traffic to websites, advises Ratzman. This is taken seriously at Roastar, which Petersen says invests in SEO (organic search), SEM (paid search), Google AdWords, and pay-per-click advertising to amplify its presence online.

And of course, there’s nothing like the strength of a solid business reputation to help drive traffic to e-commerce portals. “Word of mouth gets us everywhere,” says Petersen, both among coffee roasters and packers (Roastar’s primary market) and among brands in verticals such as cannabis, pet food and treats, candy, and health and beauty.

Jiang, likewise, says that word of mouth, attractive pricing, and high-quality offset printing are important drawing cards for SoOPAK, which gets about 70% of its business through the portal. But, she notes that while she expects her online volume to grow, she doesn’t expect for the trend to do away with the need for person-to-person selling.

In some sales relationships, “people want to know who they’re dealing with,” Jiang points out. At SoOPAK, the human contact is provided by an internal sales team that uses the phone to support customers who prefer to deal with the company in the traditional way.

Petersen agrees that there will always be a certain percentage of customers who’ll require in-person contact, including face-to-face sales calls. This is why Roastar has assembled an external sales force, despite the fact that up to 90% of its business originates online. The company will continue to have both kinds of sales capability, Petersen says.

Defining a sales strategy is a choice, and Ratzman emphasizes that label and packaging producers will have a number of significant choices to make once they commit to doing business through digital storefronts.

One consists of preparing for the “disruption” that will occur when the business shifts from high MOQs and weeks-long lead times to the new model of short-run, quick turnaround production that online selling brings with it. That will mean acquiring the equipment and the skill sets needed for entering the “automatic mode” of this kind of manufacturing.

Ratzman acknowledges that some providers will be more successful at making the transition than others. But, “this is the future,” he says.

Live Events on the Horizon: An Outlook for the Printing Industry
Comments
COVID-19 Resource Channel