Debate Aside, Trump Wins Over Printing Industry, According to NAPCO Survey

In case you missed it, there was a debate last week between Presidential candidates Donald Trump and Hillary Clinton. It's almost unanimously agreed by political pundits that Clinton won the debate, however, according to a study completed in August 2016 by NAPCO Media Research (NAPCO is the parent company of packagePRINTING), Trump is winning big among printing industry execs.

In fact, out of the four industries polled — nonprofits, consumer electronics, promotional products and printing — Clinton trailed Trump by at least 20% in three of those industries (nonprofit business leaders being the only outlier with Clinton support clocking in at 53% and Trump being 34%, the rest undecided).

The survey, which polled 810 business executives, was designed to reveal how business leaders across multiple industries intend to support the two candidates come the November election. Overall, 54% of respondents support Trump, while 32% support Clinton and 14% noted that they are undecided — although after Monday night's debate some of those undecided voters may have joined one camp or the other.

Out of the four industries polled though, Trump benefitted most from the printing industry respondents — which may not be surprising considering our industry is male-dominated, which in large part makes up Trump's supporter base. At 62% support, Clinton saw support from only 28% of the printing industry, while 10% remain undecided.

When asked how passionate each respondent is about their Presidential choice, again the printing industry stands out. While most of the industries answered that they support their choice either "extremely" or "very much," Clinton supporters in the printing industry, based on poll responses, revealed that they only support her "half-heartedly." This, as the survey points out, could be because some of the respondents will not support Trump but support Clinton reluctantly.

Although it appears that many respondents are passionate about their choice for President, 31% of Trump supporters responded to the survey that they plan to vote for him because they do not believe in the alternative choice, whereas 46% of Clinton supporters have thrown their weight behind her because she is "the best of what's available." 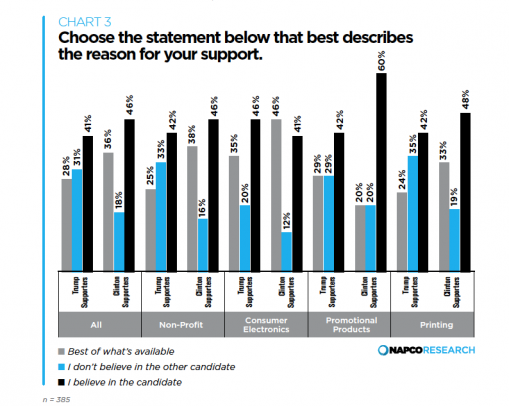 Similar to the other industries polled, the top-of-mind issue that drove printing industry respondents to support their choice was the economy, followed by national security. When asked which candidate will be better for the U.S. economy, while 63% overall answered Trump, 70% of the printing execs — the largest percentage of any of the four industries — believe that Trump would be a better President when it comes to growing the economy.

While this study obviously does not reflect every view of every printing industry executive, it does reveal that there is a large group of Trump supporters among our audience. It also shows that the economy remains a top-of-mind issue for the printing industry.

For a more in-depth look into the political views of our industry based on the survey responses, as well as the other industries polled, access the full report here.