SuperCorrExpo, the quadrennial event hosted by TAPPI and AICC, was held last week and featured keynote speakers ranging from an NFL executive with a background in the corrugated industry to Walmart's former senior director of packaging procurement. The event also served as a platform to highlight the latest technical innovations in corrugated, which included the presentation of The Innovator of the Year Award. 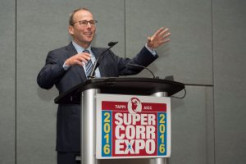 Jonathan Kraft, president of The Kraft Group, opened the event with a keynote address on Monday, Oct. 17. The Kraft Group may be best known for its holdings in sports and entertainment, which include the New England Patriots, the New England Revolution, Gillette Stadium and Patriot Place. However, according to a press release from TAPPI, the group's holdings in the packaging industry include major players such as Rand-Whitney Container, International Forest Products, Rand-Whitney Containerboard and New-Indy Containerboard, which it maintains as a joint venture with Schwarz Partners.

According to the press release, Kraft discussed the similarities between maintaining a successful packaging company and a professional sports franchise. Specifically, he mentioned how a general plant manager who understands several aspects of the business including manufacturing, budgeting and customer service is similar to a versatile coach who understands player salaries and signing free agents.

The press release states that Kraft credits the corrugated industry's focus on customer service with helping to develop his strategy in the sports and entertainment arena.

Ron Sasine was SuperCorrExpo's second keynote speaker. Sasine, a principal at Hudson Windsor and the former senior director of packaging procurement at Walmart, shared his insights into the industry and some thoughts on corrugated's future. 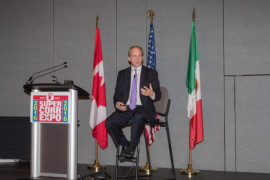 Another of SuperCorrExpo's highlights was the announcement of the Innovator of the Year award, which AICC presents annually. Barberán and Gemini North America shared the award, which recognized the JetMaster digital press. The award rotates through four categories, which include boxmakers, non-machinery, machinery, and information technology and training. This year's award was for the machinery category.

The press has led the way in the rising trend of single-pass, direct-to-board digital corrugated printing. While many suppliers unveiled preliminary versions of digital corrugated presses earlier this year, Barberán's JetMaster has made its way into corrugated production environments, including a U.S. installation at Bennett in Lee's Summit, Mo.

Click here to access a webinar featuring Craig Bradley and Robert Sweet of Bennett discussing their experience with the Barberán press.

Podcast: How the Packaging Industry Banded Together to Donate Millions of Face Shields