Succeeding with Determination and Collaboration: Lori Campbell Named Converter of the Year

For as long as she can remember, Lori Campbell has been drawn toward the business world. Whether it was playing “office” as a child, learning typing and shorthand in high school, or poring through help wanted ads for an office job after college, there was never a question as to the type of work she would pursue.

But when she started at The Label Printers as a receptionist in 1982, what Campbell didn’t expect was to become a label industry lifer, rising through the ranks to become the company president.

As someone with a love of business, it didn’t take long for Campbell to grow enamored with the label industry, and how it provides exposure to so many other business segments. And, of course, she loved the excitement of strolling through a store and recognizing a label her company printed.

Discovering the packaging industry has also given Campbell the opportunity to travel the world, sharing her knowledge on the impact labels and packaging have on other industries. 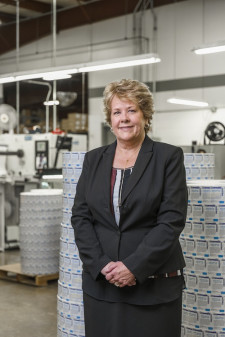 To date, she’s visited five continents, and takes particular pride in her participation in the annual International Law Enforcement Intellectual Property Crime Conference, which visits a new city each fall. Campbell explains that the conference covers everything pertaining to enforcing intellectual property, and with The Label Printers’ experience in security printing, she has been a speaker at the conference, sharing her experiences with a variety of law enforcement professionals, including FBI and customs officials.

“In packaging or printing, you’re not limited,” Campbell says. “The world is your oyster and I think it’s really cool to see both the sameness of business and yet how unique and different each [company’s] approaches are.”

All Hands on Deck

Fresh out of Eastern Illinois University, Campbell received the call from The Label Printers that they were interested in bringing her on board. Her initial assignment was to serve as a receptionist. That wouldn’t last long, however.

Campbell explains that at the time, the Aurora, Ill.-based Label Printers was a small company, having been founded just 15 years prior. Due to the company’s size, Campbell says all employees were needed to take on multiple roles, and while her job title may have been “receptionist,” she quickly found herself working closely with the sales team.

“At a small company, everyone wears multiple hats,” she says. “I was heavily involved with our sales department. I kept track of all their call reports. I pulled samples for them to show to customers — just a variety of stuff.”

Campbell recalls that in the early stages of her career, The Label Printers benefited greatly from a strong demand for labels. Because there were a limited number of converters out there, she explains that locating customers and opportunities was not much of a hurdle. But as business continued to roll in, the company experienced significant growth through the 1980s, and in the 1990s, Campbell says the company doubled its personnel.

During this period, The Label Printers specialized primarily in industrial labels, and did not maintain much business in prime label markets. With its strong foothold in industrial, the company expanded its facility in 1989, nearly doubling its size. After this period of organic growth however, The Label Printers completed its first acquisition in 1996, bringing prime labeling on board and leading to the construction of its current facility.

Not only was Campbell involved in assisting with the design of the new office space, she also developed an employment test that The Label Printers still uses for prospective job candidates.

Meanwhile, her own career path was beginning to take shape. Following her stint as a receptionist, Campbell took on the role of sales coordinator. Though she describes the job as being similar to a customer service position, providing support to the sales staff, it did allow her to take on some individual accounts. 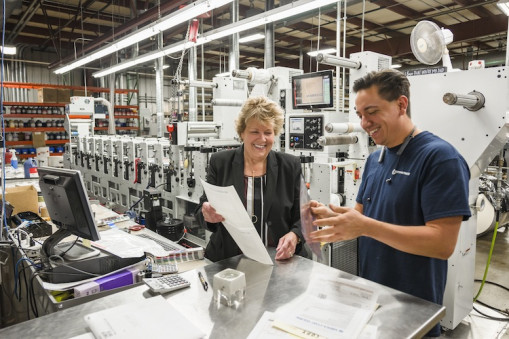 While she enjoyed gaining experience on the sales side of the industry, the role Campbell really had her eyes on was in estimating. She explains that it took some persistence for the company’s owners to grant her an estimating position, but after a few years, they relented and she began to learn the technical side of the business. Combining this with her sales and customer service background, Campbell says she was able to round out her knowledge of the industry’s multiple aspects, and apply it to estimating.

“A quote was not just a quote for a label,” she says. “It was about understanding what the long term plan is for that business for our customer.”

As Campbell continued to gain estimating experience, The Label Printers continued its growth, bringing more employees into the fold. So in addition to her customer service responsibilities, Campbell took on the job of office manager. After a few years, however, she says she wanted a more defined supervisory role, and made the decision to bet on herself.

She had been working with one of The Label Printers’ largest customers on an opportunity to take over its global label business. The Label Printers was in the running with multiple other competitors, but Campbell, at the helm of the project, remembers telling her boss, “‘If we get this business, I want to be general manager.’”

When Campbell sealed the deal, she says her boss held true to his side of the bargain and she was named general manager, a role that eventually evolved into chief of operations. She held that position until last year, when she officially reached the pinnacle of her rise from receptionist, being named president of the company.

Branching Out Into the Community

In her early days with the company, Campbell explains that The Label Printers maintained a very insular culture, largely keeping to itself and conducting very little industry outreach.

But by joining TLMI, that insular approach began to fade.

Campbell recalls that in the 1990s, Suzanne Zaccone of Graphic Solutions, Inc., a former TLMI board member and chairperson, made the first recruitment for The Label Printers to join TLMI. Campbell declined the invitation, however.

A few years later, Cindy White of Channeled Resources Group followed up to make another push. Campbell says that during this timeframe, The Label Printers was starting to realize it could benefit from industry collaboration, and that joining the association was a logical step.

“She came along with the right message at the right time and I said ‘OK,’” Campbell says.

After attending a few meetings and learning the ropes, Campbell was approached by Frank Sablone, then the TLMI president, who wanted her to become more actively involved.

She decided to join the Technical Committee in 2011, and after Nick Van Alstine of Macaran Printed Products stepped down from his chairman position on the committee in 2015, Campbell took the role on, joining Michelle Garza, VP of operations for Dantex Corporation, as co-chairs.

Among the many achievements of the Technical Committee under Campbell’s and Garza’s leadership is the rebranding of the former Technical Conference to the printTHINK Summit. Held every other year, when Labelexpo headed to Brussels for its European show, the Technical Conference provided an opportunity for TLMI members to gather in Chicago and share insights, best practices, and experiences with a strong focus on the technical side of the industry.

However, following the 2015 Technical Conference, Campbell recalls receiving feedback from the membership requesting business management topics be included in the event going forward. So, building on the Technical Conference model, the printTHINK Summit was born, debuting in 2017 and delivering its second edition this year.

A Leader and Role Model

In addition to their roles within TLMI and the Technical Committee, Garza says she and Campbell have become close friends. And with Campbell being named chairman elect of the TLMI Board of Directors, Garza says the association has selected the perfect role model to take the reins. 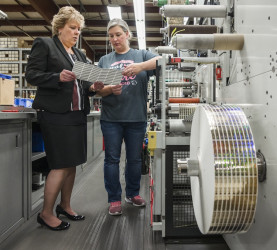 From left, Lori Campbell and Press Operator Jen Salazar discuss the customer expectations of a job being run at The Label Printers.

“As a leader and as a friend, she is so empowering, enthusiastic, poised, and articulate,” Garza says. “I think that is her strongest attribute — she is so articulate and she can think on the fly. I always feel so good after speaking with her. I feel wiser and stronger every time. Each time I meet with her, I learn something from her. That’s why I admire her so much.”

According to White, of Channeled Resources Group, one of Campbell’s leadership traits she most admires is her ability to drive collaboration within the association. Whether it’s within the Technical Committee or on the Board of Directors, White says Campbell makes it a priority to seek out diverse perspectives on an issue so the most informed action can be taken.

“She has an ability to collaborate and bring in other people to make sure she has lots of diverse perspective in the room,” White says. “She understands collaboration and how important collaboration is to make things work well.”

These sentiments are echoed by Kathy Alaimo, president of Syracuse Label & Surround Printing, who has collaborated closely with Campbell on the Technical Conference, serving as a co-chair of the event in 2015.

“She appreciates the skillsets and different gifts that each person brings,” Alaimo says. “When you’re working on a committee, she’s thoughtful about listening to what each person is bringing to the table and utilizing that.”

Beyond the networking opportunities that an association membership provides, Campbell says that one of the most beneficial aspects of being part of TLMI is the education provided at association meetings. Regardless of if it’s a speaker from the industry or someone from outside the label world with an inspirational message, Campbell says she always finds pieces of information to bring back to her team.

“Whether it’s on process improvement, developing your culture, or any number of things, it’s energizing for me, and allows me to bring back some nuggets — and some books sometimes — and share it with the team and spread the wealth,” she says.

Clearly, the business management practices Campbell has brought to The Label Printers have been effective, as evidenced by the company’s streak of 10 consecutive Eugene Singer Awards for Management Excellence. The award, which TLMI has presented annually to one company in four size categories, is determined based on a set of growth and profitability ratios measured in TLMI’s annual Management Ratio Study. 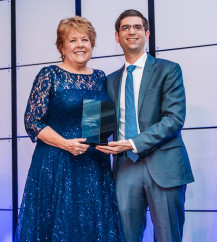 Cory Francer, editor in chief of Packaging Impressions, presents Lori Campbell with the Converter of the Year award during the TLMI Annual Meeting.

While the decade-long streak is an achievement to be proud of, Campbell explains that it’s not a cause for The Label Printers to take its foot off of the gas. She says that despite the accolades, the company is always looking for ways to improve and continue on its growth trajectory.

“We’re never satisfied and that always keeps us on our toes and keeps us vigilant toward both the bottom line and growth,” she says.

As for the growth of her own career, Campbell says a great deal of credit is due to Bill Kane, who has been with The Label Printers since 1970 and has been CEO since 1993. She says that from the beginning, Kane has been — and continues to be — willing to give her the freedom needed to succeed. Additionally, she says that the support she has received from her friends and colleagues in TLMI has been essential in her journey to the heights of the industry, and she continues to be amazed by the knowledge and drive of those in the association.

“I feel very fortunate in so many ways and would not be here in this job or in this position at TLMI without the help and friendship of so many people,” she says.

The Economics of In-Line Digital Printing