When a new technology begins to emerge, it’s common to speculate as to whether it will completely take over from its predecessor. With the emergence of LED-UV curing technology, the immediate question was if it would eventually unseat conventional UV curing — the standard bearer in the industry for decades. But, to the benefit of printers and converters, it appears the two technologies are poised to coexist, each providing its own set of distinct advantages, allowing printers to choose the right technology — or a combination of both — for their specific needs.

Where Each Technology Shines

According to Bill Bonallo, VP of operations for IST America Corporation, a supplier of a variety of UV and LED products, the goal of the two technologies is the same, they just accomplish it in different ways. Specifically, he explains that both technologies create a UV energy source at specific wavelengths that inks, coatings and adhesives are sensitive to, and under the properly matched conditions, will result in immediate curing. 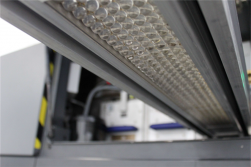 In the packaging industry, Bonallo explains that conventional UV, which IST refers to as LAMPcure, has remained the industry’s preferred technology for a variety of reasons, but its application flexibility and the range of consumables designed for it, makes it particularly well-suited for specialty package printing.

“Traditional UV is very common in the packaging industry in particular, where a wide variety of substrates and often multiple applications in the same press pass are used,” he says. “It offers tremendous no-risk application flexibility and the products that are available for use with traditional LAMPcure are immense in the industry.”

The flexibility of conventional UV also extends to the UV wavelengths it produces. Bonallo explains that currently an LED system can only provide a single specific very narrow band wavelength, whereas a conventional system can provide a wider band that includes UV A, UV B and UV C, each with their own unique attributes including the influence of surface cure via UV C, something lacking with LED formulations. Additionally, lamp doping can be changed to provide different wavelengths for specialty applications like a deeper cure for applications that are more challenging to cure.

While the flexibility of conventional UV is among the reasons it’s still the most prominent technology, there are reasons why LED technology has drawn so much attention since emerging on the package printing scene.

Two of the primary advantages of LED-UV technology are that it is well-suited for use with heat-sensitive substrates because 85% of the infrared energy is emitted through the back of the LED module, and it provides significant sustainability advantages over conventional UV.

“The biggest driver for LED is energy savings, a lower carbon footprint, and much less maintenance,” says Mark Hahn, VP of sales and marketing for AAA Press International, which produces the Lightouch line of UV and LED products. “The only moving parts in an LED system are a pump and a compressor for high-power water cooled units and a small fan for low-power air cooled systems.”

Hahn explains that another key energy saving aspect of LED is that it eliminates the need for makeup air.

“The makeup air to cool the UV source in an LED system is simply not required like it is for conventional UV,” Hahn says. “There’s no need for makeup air in the facility because LED only requires a closed loop water chiller to maintain optimum LED module temperatures, so you’re putting very little heat back into the environment. With conventional UV we’ve got to pull conditioned air through the lamp assemblies with an exhaust blower to cool the lamp and then exhaust the spent air out of the facility, wasting costly conditioned air.”

When weighing the two technologies, it’s also important to understand the role that consumables play. When LED technology first emerged, one major concern was the availability of inks, coatings and other materials that could work with the new curing technology.

Jon Surch, managing director for Eltosch Grafix, a manufacturer of LED and conventional UV curing products, explains that while the overall range of materials available for conventional UV remains the mainstay, LED-UV certainly has made a foundation in the sheetfed offset process and is building on this daily.

“Conventional still reigns king in flexibility as far as your process,” Surch says. “You have a broader range of materials available today. Of course with conventional systems you need some management with heat sensitive substrates, but as far as inks, chemistries and coatings go, conventional is still holding its own. However, UV LED has made great progress on the process chemistry side and is continuing to provide additional capabilities.”

Surch explains that for printers looking into adding either conventional UV or LED-UV, it’s important to understand the impact each technology will have on their specific processes and all of the factors that play into calculating a return on investment.

Depending upon the configuration, the initial cost of investment between LED and a conventional system could be similar. When doing any calculation on a return on investment, Surch explains it is important to look at more than material costs and/or potential energy savings. When factoring for an LED environment, it is a broad combination of items including; energy savings, the removal of lamp warm-up time due to LED’s instant on and off capabilities, and the reduction of heat inside the press allowing reduced maintenance. Surch says when combining all of these factors, LED can emerge as the right option and can produce a very fast ROI with a suitable business mix.

Bonallo explains that for many printers, creating an optimal curing environment can mean implementing both technologies. He says that due to the specific strengths of each technology, many printers are implementing a hybrid system that utilizes the best of both worlds, and explains that risk versus reward and the attributes of a proven technology versus an emerging technology often play a role in the decision-making process.

Because coatings designed for LED curing are more expensive and still have some challenges, Bonallo says it’s common to use conventional UV coatings in combination with LED curable ink. Since LED curable ink can also be cured with traditional UV technology, there is no negative impact in combining the technologies.

“We see a lot of that — the hybrid mix between LED and conventional UV,” Bonallo says. “Today, if someone is going out and investing in this, that’s not a bad concept because what you’re really putting on the end of the press is an insurance policy.”

Bonallo explains that LED systems are normally set up to wet trap all inks and cure either after the last print unit or after the coater. This can be a lot of ink and coating film thickness to manage with a single light source, and the dry trap or semi-dry trap results provided by multiple interdeck conventional UV units can provide better print quality.

Hahn likens the selection of a new curing system to buying a car, as there will be pros and cons to each and those need to be weighed for each individual situation. He says many printers often experience “sticker shock” from the capital expense of an LED system, but once they figure out the energy savings, maintenance savings and increased uptime LED can provide, they are more inclined to try the new technology.

“It’s about consideration of the entire long-term operating costs of each technology including downtime from maintenance rather than simply looking at the capital equipment cost,” Hahn says. “Take the delta of the capital equipment cost and consider all other operating expenses of each technology over time and you will find that the payback of LED can be very swift.”

Bonallo explains that because IST features a full portfolio consisting of both UV and LED products, the company works with printers to find the best solution for their needs. He says because LED is newer in the field, there is a lot of curiosity about the technology, and while it can be a good choice for certain situations like commercial and perfecting applications, printers need to carefully weigh both technologies before making a decision.

“I think there’s a great future for LED,” he says. “There are a lot of advantages to the technology, however at this time it doesn’t mean it’s the best or even a ‘universal’ solution as it is so often marketed. It’s an option and it’s an option people should consider, but they need to do their homework and know both sides of it.”