A passion for creativity and dedication to the industry are just part of why Nick Van Alstine is packagePRINTING’s 2017 TLMI Converter of the Year.

Unlike most 18-year-olds, Nick Van Alstine had a pretty clear idea of what he wanted to do with his life. When his father purchased the family business’ first label press, the younger Van Alstine was eager to grasp the opportunity to enter the printing industry, eventually falling in love with the craft that allowed him to watch as ink applied to a moving web made images come to life.

Van Alstine and Sons Inc., founded in 1950 by Nick Van Alstine’s grandfather William, Sr., father William, Jr., and uncle Robert, achieved decades of success as a paper and packaging supplies distribution company. But with Van Alstine nearing his high school graduation date and weighing the decision to join the family business, he and his father initiated the pivot into label manufacturing.

“My dad decided to buy a three-color Mark Andy press and when he did that, it really cemented my interest in the business,” Van Alstine says. “I came into the business right after high school.”

Van Alstine explains that, although the company was new to the printing industry, it had an advantage from the start, as it was able to serve the labeling needs of many of Van Alstine and Sons’ customers. Additionally, the company’s location in Cohoes, N.Y., about 10 miles north of Albany, positioned the business near technical and industrial customers, including General Electric, IBM and Carrier.

“We had a natural client base because of our existing wholesale customers,” Van Alstine says. “Pretty much all of them were using labels of some sort and were asking us to find labels for them as a wholesaler and as a distributor. Eventually we kicked that off and it just kind of kept going.”

Though Van Alstine says that the company had to surmount a substantial learning curve once it added printing capabilities, it eventually mastered its first three-color central impression flexo press, growing into larger, more complex in-line presses to create increasingly elaborate labels for its expanding customer base.

As Van Alstine learned the ropes alongside his father and uncle in the 1980s, he says Macaran began serving the food market, and it became one of its largest target market segments. With the company continuing to grow, Van Alstine explains Macaran expanded its physical footprint with multiple moves, eventually settling into a 60,000-sq.-ft. facility in Cohoes in 1995.

At that stage, Van Alstine’s father and uncle had both retired and he took over the presidency of the company. Alongside CFO Ed Wixted and Gary Riley, president of Van Alstine and Sons, Van Alstine helped steer the company in some exciting new directions.

Given the company’s proximity to the New York City metro area, Van Alstine explains he began to explore the health and beauty care industry. However, he quickly realized that those markets required more elaborate labels that would have been challenging to produce on the company’s fleet of presses. Additionally, he explains that while Macaran had largely been involved in paper label production, these higher-end markets were demanding film-based labels. 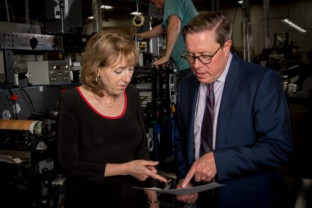 To satisfy these customer needs, Van Alstine invested in the company’s printing technology, adding Gallus EM 280 flexo presses. Additionally, he invested in his team at Macaran, finding and developing people who possessed the expertise needed to become leaders in these market segments.

“I’ve always been interested in the craft and like any business owner, excelling at the craft,” Van Alstine explains. “It was really important to me that we learn as much as we could about all of the elements in the process — inks, substrates and adhesives. I wanted us to be experts at what we did. We weren’t just printing labels. We were going to understand the applications. We were going to be able to give people advice on adhesive systems and liner systems and the proper face sheets to use. Then, when we did go to press, the quality of our labels would be better.”

“I have been fortunate to find people who share and execute our vision,” Van Alstine says. “From my managers to my operators and everyone in the organization, there is a commitment to servicing our customers and being the best we can be. When I’m on a sales call, I know I have one of the strongest teams in the industry behind me, which makes my job a whole lot easier. Those people, along with the equipment that we have, made it possible for us to be successful in those markets and to develop a reputation for doing really beautiful work.”

All About the Family

While most business owners make it a priority to ensure their employees are happy and well taken care of, Macaran Printed Products has the numbers to back it up. Of the approximately 70 employees working for the company, Van Alstine states that about 85% have worked there for more than 10 years.

In addition to the competitive pay and benefits, Van Alstine says he has stressed the importance of Macaran Printed Products providing a positive environment and pleasant working atmosphere. With this combination, he says, turnover is kept to a minimum.

“It’s a family business and we try to treat people like family,” Van Alstine says. “It’s a job too, but at least in part because it is a nice atmosphere, we have very little turnover. I think people do feel respected and listened to.”

Van Alstine explains the company’s respectful and open atmosphere has also led to a company-wide enthusiasm for new technology — even among industry veterans. For example, Van Alstine says Macaran was among the early adopters of UV flexo printing, along with digital prepress, which it added more than 15 years ago.

Now, to go along with its expertise in flexographic printing, the company has added inkjet capabilities in the form of a Domino N610i digital press. While adding new technology to a company’s repertoire can often cause some discomfort among employees, Van Alstine explains that with Macaran’s strong culture of communication, that resistance is mitigated.

“We work closely with our employees and communication is a huge part of it,” Van Alstine says. “All of my senior management people are very engaged with the process. Our people understand why we make the investments we make, and I think they understand how the investments benefit the company and offer growth opportunities to each of them. So they embrace the changes, they don’t fear them.”

When Van Alstine took over the presidency of Macaran Printed Products, it was his interest in enhancing the company’s technology that first drew him to TLMI. Macaran had not joined the association when Van Alstine’s father and uncle were at the helm, but as a young business owner, Van Alstine saw the value of staying abreast of the latest label printing technology.

His first involvement with TLMI came via attending the association’s Technical Conference (now known as the printTHINK Summit), which is held every other year. Van Alstine explains that when he first started attending the conferences, he didn’t foresee his involvement extending beyond sitting in on the educational sessions.

However, after a few visits to the Technical Conference, Van Alstine began attending the TLMI Annual Meeting in the fall and the Converter Meeting in the spring and, to his surprise, found that an association of competitors can lead to friendships — some that even extended outside the business world.

“I was fairly young when I first started coming to TLMI and I had no real intention that I was going to come in and make friends,” Van Alstine recalls. “It just didn’t occur to me that these people were going to be so nice. I was coming in from more of a competitive standpoint thinking, ‘I’m in a room full of competitors.’ But, the people in this industry are so nice and so welcoming, and that was a real refreshing surprise for me.”

Once he became a regular attendee at all of TLMI’s events, Van Alstine decided to further satiate his appetite for learning by joining the Technical Committee. But it was after giving a presentation during the 2009 Technical Conference that he was unexpectedly asked to take on a TLMI leadership position.

As he was walking off stage, Art Yerecic, then the chairman of the Technical Committee, approached Van Alstine, and asked him to be a co-chair of the 2011 Technical Conference. Van Alstine agreed, and ran the following conference alongside Michelle Garza, VP of operations for Dantex RBCor, and Brian Gale, president of I.D. Images.

Van Alstine says that after the success of the Technical Conference, he and Garza were appointed the co-chairs of the Technical Committee, and he followed that up by being named to the Board of Directors. While a position on the TLMI board of directors typically lasts three years, Van Alstine’s dedication to TLMI shone through when he was called up again to serve in a pinch. After Van Alstine’s first term ended, another board member left his company, meaning he had to step down. Van Alstine then filled in for the remaining two years.

At the time, Dan Muenzer, now TLMI’s president, was the chairman of the board. During this transitional timeframe, Muenzer says that Van Alstine’s intellect, knowledge of the industry and collaborative approach helped steer TLMI in a positive direction.

“Nick is a really smart man who asks really good questions,” Muenzer says. “He doesn’t command the conversation or say, ‘This is what we need to do.’ His approach is far more collaborative. He’s really good at promoting change through collaboration.”

Having worked closely with him on both the Technical Committee and in co-chairing multiple Technical Conferences, Garza explains that Van Alstine is always willing to share his first hand experiences as a converter, which helps to ensure TLMI’s events are providing the best information to attendees.

“It’s been great chairing the conference with him and being on the committee with him because of his knowledge and insight into everything,” Garza says. “It’s always good to get a converter’s perspective because he’s telling us what their problems are, what their issues are and how he has solved things.”

A Passion for Art and Travel

Given Van Alstine’s passion for the creative elements of the label printing industry, it’s a natural fit that outside of work, he is the president of the Spencertown Academy Arts Center’s board of directors. The academy, housed in a historic 1874 Greek Revival schoolhouse, offers art programs and events for the community surrounding Spencertown, N.Y., at low or no cost.

Van Alstine explains that in 1970, the building was sitting unused and there were plans in place to tear it down. However, wanting to preserve the architectural icon, a group of people from the town banded together to preserve it.

“The Hudson Valley is rich in the arts and people needed outlets, so they turned it into an arts center,” Van Alstine says. “It’s still alive and thriving.”

Additionally, Van Alstine says he takes the opportunity to travel whenever possible, with Asia and Italy as favorite destinations.

As a label industry lifer, however, Van Alstine still maintains his passion for the industry and for the people in it.

“It’s been very gratifying,” he says. “I’ve had an opportunity that not everybody gets. It’s gratifying for my dad and my family to have seen the business go on.”