Packaging enhancements and embellishments have long been sought out by brands seeking to give their products a luxury or premium appearance. But according to Zane Peterson, director of creative services for Mansfield, Mass.-based Hub Folding Box, the first step in taking a luxury package to the next level is helping the brand define what luxury means to them.

To do this, Peterson recommends communicating with the brand owner using visuals, such as online images, and asking them questions to determine what embellishments they believe will add a premium effect, whether it’s shiny metallics, embossing, or texture.

Definitions of luxury have evolved over the years, and in many instances are more about creating an immersive experience between the brand and consumer, rather than focusing solely on visual design. According to Kate Marlow, creative partner at Here Design, a London-based design agency, interactive packaging technologies have changed the ways in which a luxury brand can extend its messaging to the consumer.

“The union between crafted, human made packaging and future digital technologies allows a canvas of any size to expand to become infinite,” Marlow says. “Clear brand identity and copywriting will always remain relevant, bolstered by the physical artifact and its connection to the digital world.”

For example, Balvenie whiskey, a high-end spirits brand and long-standing client of Here Design, worked with the agency to develop an immersive experience. Marlow and her team developed a campaign called “Balvenie Stories,” to celebrate the human connection to the brand. The packaging had hand-drawn illustrations from the landscape of the distillery, featuring an NFC-enabled neck tag that allowed consumers to use their smartphones to listen to a corresponding podcast detailing the distillery’s history.

“It made your experience of sitting and drinking a whiskey much fuller and richer,” Marlow says.

The Move Toward Natural

Glossy and glittery enhancements that have historically been associated with high-end packaging are being used less often than they once were, Peterson says. Instead, Peterson explains that brands are shifting toward a more natural appearance in their packaging, along with added tactile elements. For example, he says adding texture through coatings and embossing can add a richness to a folding carton.

That was the goal of Hub Folding Box’s project with Keurig. The company worked with Hub Folding Box to develop a folding carton for an artisanal blend of coffee. To develop the coffee, the company used old bourbon barrels to age the coffee to achieve a rich bourbon scent and bourbon-infused flavor. Peterson aimed to reflect that process in the packaging. 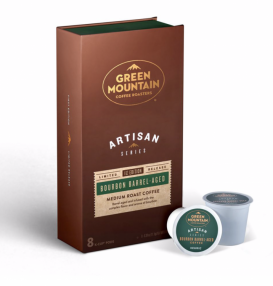 According to Peterson, the tactile enhancements of a package are only beneficial if the consumer finds something visually appealing enough to pick up the package in the first place.

“The first step is to figure out how to draw someone’s eyes to [a brand’s] product versus someone else’s on the shelf,” Peterson says.

He explains that contrast is an effective method to keep the overall packaging design simple, while still creating eye-catching effects. A folding carton with velvet lamination and embossed patterns that had a contrasting metallic ink would combine a natural feel, while featuring a visual element that can capture a consumer’s eye.

“You can control, using areas of matte and areas of gloss, how the light reflects off the surface of a package,” Peterson says. “So when you combine cool angles of a unique structure, and you play with different coatings and different textures to accentuate the light as it reflects off of that surface, it really creates what luxury brand managers are after.”

Bill Wynkoop, an adjunct professor in Rochester Institute of Technology’s packaging science program, explains that a carton with a natural finish can come across as more authentic.

“Matte, or non-gloss, in many categories, conveys a natural feeling,” Wynkoop says. “A lot of times, that high gloss can be misconstrued by somebody to be all-sizzle-and-no-steak. If you eliminate that, many times it comes across to more people as authentic, or more honest. I think people resonate more when they don’t see the gloss in the sense of something having a natural approach and a sense of something having high integrity. That’s not always true, but in many cases, it is.”

As consumers are being drawn toward packaging with a more natural appearance, sustainability and recyclability are key top-of-mind issues. Marlow explains that luxury brands are recognizing this and ensuring that they are not implementing packaging embellishments at the expense of sustainability.

“Some of the most revered luxury brands today are kicking back against [flashy embellishments] and are thinking more deeply about what luxury can mean and how that is represented through packaging,” she says. “A [focus on sustainability] represents the brand’s core philosophy, and makes a statement of intent, which customers appreciate and align themselves towards.”

According to Marlow, luxury brands have the capability of communicating their ideologies and philosophies through packaging alone. However, it’s imperative to maximize a package’s visual representation to create a positive first impression on a consumer.

Wynkoop says brands that find new and creative ways to add luxury components to their packaging will be at an advantage. For example, the digital embellishment equipment from companies like Scodix and Highcon are allowing brands to entice consumers with packaging designs they are unaccustomed to.

“What I think people react to are things that they haven’t seen before; something that really engages them because it’s new,” Wynkoop says.

Wynkoop explains that it’s important to monitor embellishment trends because they tend to evolve rapidly. The most important thing packaging providers can do for their customers is to understand the market they’re looking to enter, and learn what enhancements are already popular within it. Then, he recommends looking outside of that market, to determine what embellishments brands could adopt successfully from other verticals.

“Right now, everybody is using certain things, and it is harder to stand out, in theory,” Wynkoop says.

However, as a multiple-time judge in the Paperboard Packaging Council’s annual Carton Competition, Wynkoop says he has seen how creative brands and converters can be with digital embellishment technologies, and says that the opportunities for using this equipment are particularly exciting.

“Every year, when I go in as a judge, there is still something that really blows me away,” he says.

For luxury brands, Marlow recommends that they don’t overlook the importance of packaging, especially when it comes to maintaining a strong relationship with consumers seeking a high-end experience.

“[Packaging] encapsulates the ideologies and the philosophy of the brand,” Marlow explains. “It is its own advertisement; it has its own personality. It is real, it is tangible, and it exists in our cultural landscape. Unlike the digital world, it has real presence and longevity.”