Best Practices: Care and Maintenance of Doctor Blades and Chambers

Flexographic and gravure printers often provide a great deal of care for their anilox rolls and ink, but according to John Hirko, national account manager for Flexo Concepts, there’s another critical component of these printing processes that often gets overlooked: doctor blades.

“They’re often just an afterthought, but the reality is that they interact with what we would call ‘the heart of the printing process,’ the anilox rolls,” he says. “Between the ink, the anilox roll and the doctor blade, they’re essentially the components responsible for creating the printed product. Without properly maintaining and taking care of the doctor blade system, people really open themselves up to issues down the line.”

Package printers have several doctor blade options available to them, including various metals and plastics. Each type of blade features its own benefits and disadvantages, so it’s important for printers to speak with doctor blade manufacturers to determine which blade is right for them.

One of the biggest missteps printers make with doctor blades is applying too much pressure to compensate for issues in print quality. If the doctor blade isn’t clean, is damaged or has been placed in an incorrect or damaged chamber, it may not connect with the anilox roll properly, resulting in uneven ink metering. Johnny Stamey, technical product manager at Daetwyler, a manufacturer of doctor blades, says this is where the problem starts.

“The first thing a pressman will do to fix a problem is increase the pressure,” he says. “The lines will go away, but at that point, you’re not wiping with the tip, you’re wiping with the back of the blade, which will leave too much ink on the anilox roll, therefore your ink film thickness is too heavy.”

According to Marion Bobo, technical manager of Performance Design, a designer and provider of flexo reverse angle enclosed chambers, and technical support for Allison Systems, the best ways to make sure a doctor blade is properly cared for is by following the manufacturer’s guidelines for care; making sure that the ink deck is kept clean; using an ink filter; installing a strong neodymium type magnet in the ink management system to attract blade particles circulating in the ink system; and ensuring every chamber includes a readout gauge and/or blade stops to let the operator know how much force is being applied to the anilox roll by the blade. He recommends that blades only be used to the point of a diminished angle position and suggests checking with the blade and chamber manufacturer to determine what the end of functionality of the blade tip is with a printer’s design.

Many press operators may wonder if a doctor blade should be cleaned regularly, but Ken Theriot, global marketing manager at polymer blade manufacturer Flexo Concepts, recommends that they are replaced instead. 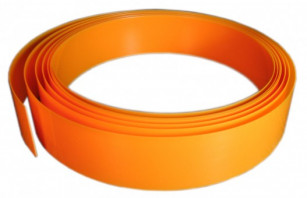 “We don’t recommend reusing the blade,” he says. “It’s a low-cost consumable and it’s highly recommended that the blade is changed with each new job.”

Metal doctor blades should also be replaced after use, as they can become very sharp and unsafe to handle after a short amount of time, Stamey says.

Stamey explains that each printer has varying methods for deciding when to change a doctor blade. Some printers may decide to change the blade when changing the anilox roll or plate, some may wait until the blade or chamber is too worn to perform properly, and some may change it at a set time each day or week. Even though each print shop follows its own guidelines when it comes to replacing doctor blades, there is one recommendation that Stamey says all shops should adhere to.

As many printers have increased the line screen of their anilox rolls, Stamey has found that many have not updated their doctor blades.

“[Some] printers went from running all line work and the highest line screen they had was 600 and now they’re running 1,000 to 1,200 line screens with process work, and new anilox rolls and plates and they’re running the same doctor blades that they’ve been running forever,” Stamey says. “Any time you make a change on the press, you need to reevaluate your doctor blades.”

“The doctor blade material is only as good as the holder,” Bobo says. “There are many printing problems I see in some plants because of the chamber or blade holder.”

He says that many plants using plastic blades are using them with a chamber designed for steel.

“It works, because if it didn’t work, people wouldn’t do it,” he says. “But it’s at a detriment to the blade and press. Your blade clamp may be a good example of this fault. Check your blade clamp under the cut or relief area. If there is no relief, inquire with your chamber manufacturer.”

He explains that it is best to talk to the manufacturer to make sure that it is understood what type of chamber is being used and the proper doctor blade to use with it.

Although the chambers don’t need to be replaced as often as the blades, they do need to be replaced every few years, he explains, depending on the material they are made out of. For example, aluminum chambers may last seven to 10 years, but could begin to warp and corrode after only five years. Plastic chambers may warp earlier, he says, but press operators will resort to applying more pressure on the blades to compensate for worn chambers, blade clamps, end seal clamps and faulty chamber hardware.

Not only does the chamber need to be monitored for performance, it should be cleaned regularly.

“If your [chamber] is not properly cleaned, the doctor blade won’t fit correctly,” Hirko says. “The blade will wear unevenly, with one side of the blade metering unevenly into the roll, and your anilox roll can become scored if you’re using steel blades. Then you will struggle to print and have to resurface or replace the roll at a significant cost.”

In the end, printers will see positive results if their doctor blades are properly cared for. Theriot explains that by maintaining the chamber system, other aspects that affect the printing process can be improved. Proper care will increase ink mileage, resulting in less money spent on inks. It will reduce substrate waste, which he says, comes at a huge cost to most printers. And most importantly, it will prevent unnecessary damage to the anilox roll, which can be very expensive.

“We often see printers installing doctor blades backwards or trying to use one side and then flip it to the other side and wonder why they’re not printing well,” Theriot says. “It’s a misconception that the doctor blade doesn’t matter, it’s one of the core components of the flexographic process.”

How Flexo has Stayed on Top in a Digital World