Press speeds and throughput are essential pieces of information when selecting a press that will meet a converter’s efficiency needs. But with so many other factors playing a role in flexo printing, steps one can take in improving efficiency extend beyond the press itself.

By improving processes in platemaking, selecting the right doctor blade and ensuring the quality of a splice, advancements in efficiency throughout the entire flexo process will follow suit. Though these aren’t the only factors that affect efficiency, they are examples of how improvements along the process chain can impact the entire operation. 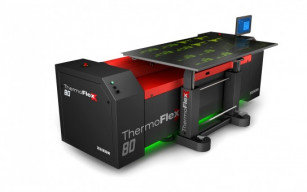 “In our 60 and our 80, we can install two 100-watt lasers to image multiple resolutions faster and more efficiently than what has been done in the past,” Mix explains. “That’s just one of the efficiencies that we’ve been able to introduce.”

To boost efficiency even further, Mix says that ThermoFlexX has also addressed automation in plate loading and unloading. He says that ThermoFlexX has introduced FlexTray, a movable cart that becomes an automatic loading table. When disconnected from the imager, its height can be adjusted and it can be tilted, thereby reducing manual plate handling and simplifying plate transportation.

“We have found that there is an interest in reducing handling,” Mix says. “That’s when we started working on our FlexTray and automation to really reduce the amount of handling a person has to do as they’re moving plates.”

Instead of using the common laser ablated mask system (LAMS), which utilizes a carbon mask built directly into the plate, Kodak’s system uses a different mask material and a different polymer. Weiss explains that Kodak’s platemaking system uses a lower-powered SquareSpot laser, which more accurately recreates the image pixel-for-pixel. The thin dye-based mask is removed much more cleanly than the thick carbon mask needed in the LAMS process.

While creating this mask may appear like the process is reverting back to the film production required in analog platemaking, Weiss explains that creating this thermal imaging layer (TIL) is a much faster process than creating a LAMS mask and provides the necessary oxygen block to make plates with flat top dots, leading to improved ink laydown.

The TIL also allowed for the introduction of DigiCap NX screening, which improves the laydown of the ink. By spreading ink out, rather than piling it up, customers can achieve higher densities for stronger colors and higher opacities for a better white foundation, and do it with less ink. This allows for less drying, which can mean higher press speeds and the use of less lamination adhesives.

“Our ability to produce these higher caliber plates that are more consistent, more stable and more accurate really gave [customers] the benefits in the pressroom for higher speeds and better efficiencies,” Weiss says.

In a manufacturing process that involves thousands of dollars worth of equipment and materials, it may be hard to reconcile that a roll of tape could play such a huge role in improving efficiency. 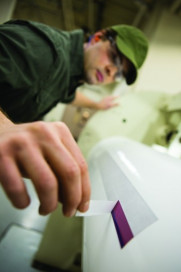 But when it comes to splicing, Tanya Piltingsrud, global business development manager at 3M, explains that a number of things can go wrong during a splice that can impact efficiency. Using a trustworthy tape however, can increase efficiency and peace of mind during the flexo process.

One area of concern is operators’ usage of complex splicing patterns, generated from a lack of trust in the tape being used. To combat this, Piltingsrud recommends using a tape specifically designed for the flexographic printing process. For example, 3M’s latest addition to its lineup is the 8387 splittable flying splice tape. This tape, she explains, has been engineered to stick to substrates with a low surface energy, such as the films commonly found in flexo printing.

Because many tapes struggle to stick to low surface energy materials, Piltingsrud says that operators occasionally compensate for this by using an insurance layer of tape. But with a tape such as 8387, operators can be confident in its adhesion properties and use less material in the splice. Piltingsrud also explains that this tape lacks fibers or other pieces that can break off and stick to the press’s rollers or CI drum, causing print defects and requiring the press to be stopped and cleaned.

She says another common concern that press operators run into is the need to slow down the press during a splice. While a slower moving press is an obvious efficiency issue, Piltingsrud says a reduction in speed can cause print quality variation.

By using a tape with the strength of 8387, she says operators can be confident in their splices at high speeds — saving time, money and maintaining quality. For example, Piltingsrud says it is reasonable to assume that if a flexo press’s speed is reduced by half during the time it takes to make a splice, over the course of a year it could add up to tens of thousands of dollars in wasted press time.

Plus, she says, if a splice is completely missed, even more time and money will be wasted.

“If you miss the splice altogether, it can be $600,” Piltingsrud says. “That’s based on the average amount of time people were taking to rethread the machine and the machine cost per hour.” 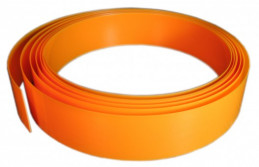 The TruPoint Orange doctor blade from Flexo Concepts boosts efficiency with its safety features and durability.

The doctor blade, an often neglected but essential part of the flexo process, can also play a major role when it comes to efficiency.

Hirko maintains that choosing the right doctor blade can have several key benefits for the printer and his or her employees. Herb Cole, Flexo Concepts’ global sales manager, explains that one of those key efficiencies is the life cycle of the blade.

Cole adds that with TruPoint blades, precise tip configurations can be customized for any print application, maximizing metering performance. Another efficiency, he says, is that the polymer material used in the blade prevents anilox damage and eliminates expensive reengraving costs.

“The proprietary polymer that Flexo Concepts uses to make its TruPoint blades can be a huge part of the printing standardization process,” Cole says.

From an efficiency perspective, he explains that this polymer material will not wear down in a way that could injure operators, a common concern with steel blades, which become sharper and more hazardous as they wear. With a safer doctor blade, Cole says, press downtime, unnecessary HR costs and other negative consequences that can occur from pressroom accidents can be avoided.