Perhaps it’s time to take some of the emphasis off the “short” in “short runs” of packaging and labels.

It’s not that the quantities of many orders aren’t smaller — and in some cases, a lot smaller — than traditional volumes for consumer and industrial applications. They are, and no one doubts that work of this type now accounts for a steadily rising share of the output that printers and converters produce. Nor is there any question that presses of all kinds are getting better at handling these runs cost efficiently.

The maturing of this segment of the market teaches, however, that numbers by themselves — units produced or linear feet of material consumed — represent only one aspect, and not necessarily the most important one, of “short run” print manufacturing. Understanding this better than anyone else, printers and converters have learned to use more than one yardstick to measure the impact of short runs on their businesses. 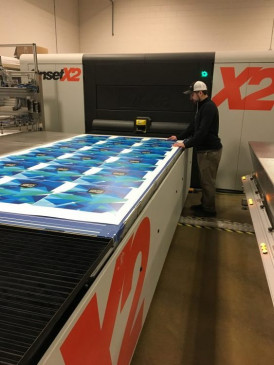 Producers also view short-run printing as a way to cut manufacturing costs, deliver quality without compromise, and meet the tight deadlines their customers increasingly require of them. Equally important, they appreciate the pathway it opens into label and packaging markets unavailable to them before they acquired short-run capability.

As Deanne Sinclair, GM of Cambridge, Ontario-based trade printer Cambridge Label puts it, “we didn’t really realize how much short-run work with different versions was out there” before the company installed its first digital label press in 2013.

According to Marco Boer, VP of I.T. Strategies, a consulting firm specializing in digital printing, printers, and converters catering to the mass-produced end of the market can sometimes find short-run output “painful and a necessary evil to sustain the high-volume business.” For non-legacy producers, however, it’s the opposite: “a high-margin opportunity to differentiate from the traditional competitors.”

This doesn’t mean that the two approaches can’t co-exist happily under the same roof. At Deer Park, N.Y.-based DWS Printing Associates, President Tom Staib says long-run offset label work “still pays the bills” as it accounts for 70% of the company’s total label volume. The growth, however, is in flexo and hybrid flexo plus digital — particularly the latter process, which DWS acquired in the form of the MPS EF SymJet press it installed in March of 2018.

“The digital/hybrid division is less than a year in operation and is picking up steam,” Staib reports. “Digital/hybrid has picked up about 25% of the flexo work that is deemed inefficient small-run work.” He doesn’t foresee the company’s larger orders “drying out” as the new press, nicknamed “Prodigy,” takes DWS into short-run markets beyond the food and beverage verticals in which it specializes.

Among printers and converters, the parameters of “short run” depend on whom you ask and on what is being produced.

At XYMOPrint in Orlando, Fla., a good deal of the short-run work is for parent company XYMOGEN’s private-label division, which distributes nutritional supplements exclusively to licensed health care professionals. The private-label products carry the purchaser’s brand information rather than XYMOGEN’s.

According to Steve Kirchof, XYMOPrint’s VP of Sales, the minimum order for custom-designed private labels is 12, with runs usually ranging between that number and about 1,000. He adds, however, that it can be a “struggle” to print extremely small quantities cost-efficiently, even on a digital press.

The solution is forecasting what each customer is likely to order over a three-month period and then ganging as many of the jobs as possible on the same press roll. Similar techniques enable XYMOPrint to process custom packaging for “24 probiotics at a time” in short runs of folding cartons.

Apart from private-label production, XYMOPrint does a brisk business in packaging, labels, and stickers for consumer products, vitamins and supplements, and medicines. Here, output in small volumes isn’t necessarily the rule, reflecting the fact that digital printing and short-run printing aren’t always the same thing.

Runs of two, or even one, aren’t unheard of when Crossmark Graphics of New Berlin, Wis., creates packaging prototypes on its HP Indigo 12000 B2 sheetfed press or on its Fujifilm Inca Onset X2 and AGFA Jeti Titan UV inkjet flatbed printers, says Jim Dobrzynski, Sr., the company’s founder.

More typically, quantities can be up to 60,000 before the job will be assigned to one of Crossmark’s offset litho presses – including a KBA Rapida 106 with a short-run track record of its own.

It’s clear that the definition of short-run printing has become scalable, enabling print service providers to set their own in-house norms. At Cambridge Label, says Sinclair, the term applies to runs consisting of 2,000 to 3,000 linear feet of substrate per version. Over that, the job will go to flexo.

That includes work earmarked for Cambridge Label’s new Nilpeter FA, a highly automated flexo press. The sweet spot for this device, Sinclair explains, spans runs between 5,000 and 10,000 feet: neither short or long by label printing standards. But, she notes, because “the ink is so expensive” when printing digitally, it often makes better economic sense to absorb the cost of platemaking and press setup with the Nilpeter FA for jobs in this range.

Staib says DWS Printing Associates usually considers a label run of 10,000 linear feet or less to be short. “However,” he adds, “we may also run larger orders digitally if variable SKUs are involved, or if added embellishments are required, such as cold foil or tactile finishes.” The nature of the artwork and ink coverage requirements are also taken into account. When in doubt, the practice is to estimate jobs both for flexo and for hybrid flexo/digital, choosing whichever process proves more cost-effective.

The MPS EF SymJet press, consisting of two flexo units before and two flexo units after the Domino print engine, gives DWS three printing options for short and not-so-short runs: flexo only, digital only, and flexo and digital combined. “Prodigy” also is the company’s platform for producing what Staib says are “the world’s first shrink sleeve labels using UV inkjet technology” with the help of a UV inkset developed by Domino.

While the numbers may be fluid, there’s general agreement about the market forces that are driving label and packaging volumes down.

Prominent among them, says Bob Leahey, associate director of Keypoint Intelligence, a provider of market research and consulting to the digital imaging industry, are goods producers’ desire for “shorter, sharper supply chains,” just-in-time inventories and minimal waste. Mass customization by factors such as locality, language, and gender also are turning large quantities of undifferentiated labels and packages into smaller, more end-user specific ones.

Small brands are generating most of the short-run work, observes Boer, adding that purveyors of pricey specialties like “dried mango chips” can usually afford to absorb the high cost of custom-printed packaging in small quantities. And, because they’re not tied to the corporate colors and design specifications that the big brands live by, private-label and artisanal brands are freer to “design to the strengths of digital,” he says.

Boer cautions “a proliferation of choices doesn’t make people happier” and that as a result, there’s a limit to the variety of products and packaging that the consumer market can support. But smaller brands, Boer emphasizes, “will cause an upheaval in the packaging industry over the long haul, and that’s the entry point for digital.”

Although its share of total packaging and label volumes remains small, digital printing’s credentials for short-run production are well established.

Its quick turnaround, high print quality and the way it eliminates conventional plate costs make digital the right choice for most of the short-run work at Crossmark Graphics, Dobrzynski says. Kirchof, similarly, calls digital “the only solution” for the kinds of short-run printing that XYMOPrint does.

Sinclair says, “We can match 90% of the Pantone book” on the HP Indigo 6800 at Cambridge Label, adding that Indigo technology was selected for its close match to high-quality flexographic printing. 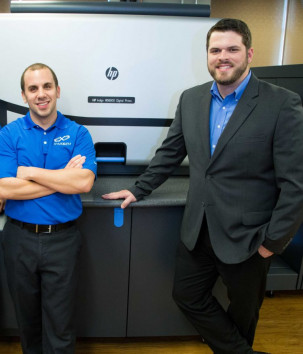 DWS Printing Associates has the digital capability as well as in-line finishing and die-cutting on its MPS hybrid press, but the device isn’t a “pure” digital platform: a choice that was made deliberately.

“We opted for differentiation from the competition when we decided to purchase a digital hybrid press,” Staib explains. “There are quite literally five non-hybrid digital presses, and maybe even more, within a 10-mile radius of our plant, and we did not want to be another me-too.” He doesn’t rule out a future purchase of a non-hybrid digital press, “but the need and demand must be there.”

This is a reminder that short-run printing doesn’t belong exclusively to non-impact toner and inkjet, even though these processes are perceived to be almost synonymous with short-run production. “The highest-quality printing from analog is still compelling,” Leahey says, “and it can be printed in short runs” on analog presses automated for economical operation in small quantities as well as large ones.

Boer points out that it’s a mistake to think of offset as “stuck” in analog when 60% to 80% of the components in late-model litho presses are digitally driven: fully automated plate-changing units, for example, or in-line color and registration color systems. These assets make offset presses quicker to set up, less prone to waste, and thus better suited to runs in the low to mid-thousands.

In certain kinds of jobs, the bar can be set lower still. Dobrzynski says that Crossmark Graphics has used one of its KBA Rapida 106 offset presses to print a batch of 555 cartons on 24-pt. board for a profit margin of 36%. Stock that thick, he notes, is outside the specs of the Indigo equipment. Beyond a few hundred copies, jobs requiring it may run more economically on Crossmark’s litho presses than on its inkjet flatbeds.

As for digitally printed short-run work with variable content, Dobrzynski reports that Crossmark produces it “here and there – not a lot.” One such job, printed on the Inca Onset X2, consisted of 1,700 cartons on corrugated e-flute, each one bearing a different image.

Although variable imaging is a “cool idea,” according to Kirchof, it won’t necessarily appeal to smaller, start-up brands trying to establish consistent visual identities. They’re more concerned with anchoring shelf presence than with making their labels look different from each other, he notes.

Still, given the proliferation of SKUs everywhere, variable printing can be a valuable adjunct to short-run production. At DWS Printing Associates, says Staib, “we have several clients that run variable versioning. Not variable data per se, but variable SKUs. One beverage account, for example, has five different flavors and nine different versions of each of those flavors.” The Prodigy digital hybrid press consolidates the work by printing the different versions consecutively, in-line on the same roll.

For obvious reasons, including what would be the high cost of making nine sets of plates for each of the five SKUs, “that cannot be done using conventional flexo,” Staib acknowledges.

Experiences like this have taught DWS that the key to producing short-run work profitably entails “proper planning of jobs, running same-stock jobs back to back, thereby minimizing changeovers.” The company is applying what it has learned at its new division, DWS Packaging, which supplies craft brewers and other customers with pre-sleeved metal cans in various sizes. “We are printing the small runs on Prodigy and the larger runs flexo,” Staib says.

On-time delivery is what keeps short-run customers coming back, says Dobrzynski, who advises charging accordingly for quick-turnaround service. “Price isn’t that important” to customers when the work is needed right away or is requested in very small quantities that are costly to produce.

“Quality first” is the mantra for everything that happens at Cambridge Label, Sinclair says, including short-run production. Achieving it in practice means “beating the drum with your staff to make sure they’re paying attention and doing the job right the first time.”

Packaging Trends Through the Consumer’s Eyes