When Hakim Merchant launched Global Venture, a label printing and converting company in Kent, Washington, he was the sole employee, seeking to grow his new enterprise from the ground up. But Merchant was no stranger to printing, having just arrived in the United States after being trained in screen printing in Japan from a young age.

At the time of its founding in 1990, Global Venture served as a material vendor to other converters. But as the business grew, customers continued to ask Global Venture if it could print and convert internally, and in late 1991, Merchant brought printing capabilities on board. Now in its fourth decade of business, Global Venture is home to 16 Mark Andy flexographic presses, including a recent upgrade to the Mark Andy Evolution Series E5.

Merchant explains that the upgrade from the Mark Andy 2200 to the Evolution Series E5 six months ago has brought several advantages to Global Venture. He says that the automation attributes of the press have been beneficial, especially in today’s challenging hiring environment, as the press can take on tasks that were previously done by an operator. Additionally, he says that the speed and throughput of the Evolution Series has helped Global Venture remain competitive on turnaround times. 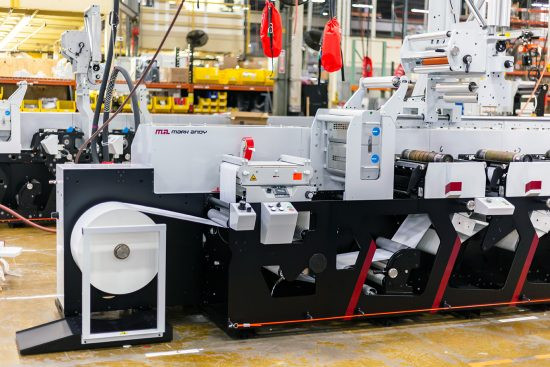 “This is the only way to move ahead — to depend more on technology than on people,” Merchant says. “It’s not that we are reducing the head count, but it is just that your throughput becomes more, and you become more competitive. The makeready time has been reduced a lot and the throughput is faster. Mark Andy was very good about sending their top technician and press operator to train our guys. I was very happy with the entire process, and they did a great job.”

Merchant shares that Global Venture’s press operators that were trained on the Evolution Series each had about 10 to 12 years of experience in running flexo presses, so they were able to acclimate to the new press quickly. He adds that they have been pleased with the new equipment, an encouraging sign as Global Venture seeks to replace more of its older equipment with the Evolution Series platform. 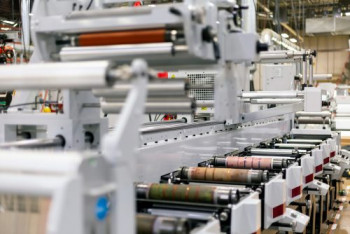 Since installing the press, Merchant says the Evolution Series has also brought distinct advantages to the multiple markets Global Venture serves and applications it produces. For example, he says that the agriculture segment often packages products in clear clamshells, which require a clear label. For that label to stand out, Merchant says an opaque, solid white background is key to providing strong visual appeal.

“This machine allows us to do that with the UV-based equipment,” he says. “All the colors and the entire label pops, even if it is on clear. Those are the advantages where we can lay down a heavier coat weight on the label.”

Similarly, Merchant says that the Evolution Series’ advanced tension control provides exceptional registration, which is beneficial for labels designed for the meat, poultry, and seafood markets. Merchant explains that these labels are often printed with a red circle or oval in the center, which is where the price is printed prior to going on shelf. 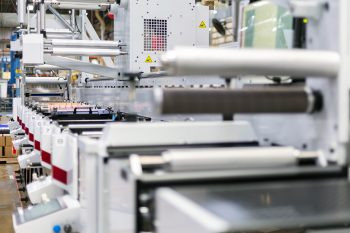 Because the price is printed on-demand at the end user, Merchant explains that it is imperative that the circle that Global Venture prints remains consistently in place.

“There are so many different registration advantages to running this press because of the higher technology,” he says. “It is applicable to just about any industry.”

Another advantage of the press’s strong registration attributes is that it can produce consistent, accurate color — a top priority for brand owners.

“There are a lot of subtle differences that are very critical to high-end companies, [such as] color matches like a house color for Starbucks or Coke who are very sensitive to the coloration of their brand,” he says. “This kind of press helps a lot in maintaining that.”

Beyond the high-end technology that Mark Andy provides, Merchant says that the company has been a good partner to Global Venture over the decades. He says that he admires the sales and service team and has been impressed by the company’s ability to develop technology solutions for the label and packaging industry while keeping an eye on future trends. 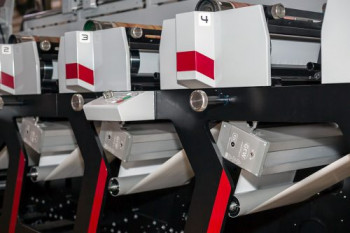 For example, he says that Mark Andy’s hybrid solutions featuring digital and flexographic technology, such as the Digital Series HD, Digital Series iQ, and the Digital Pro, are indicative of the company’s future-focused approach, and that Global Venture may soon bring a hybrid platform on board.

“Stepping into the digital world and making a hybrid where their flexo unit can be incorporated with the digital unit — those are the next generation presses and we would be interested in investing in one of those maybe in the next year or two,” Merchant says. “Global Venture itself is a very forward-looking company. That’s why we match in our strategies of growth.”