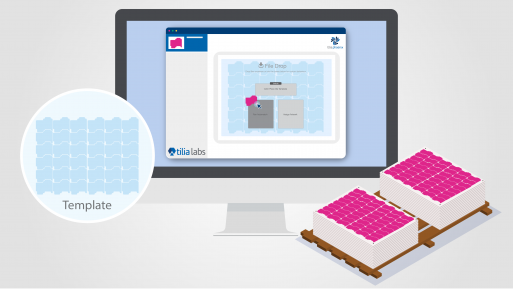 The first patent, titled “Printer to Die Cutter Media Size Shift,” enables the automatic optimization of planning and impositioning for die-cut print orders that involve printing onto media that is substantially larger than the dies being utilized. In these scenarios, planners will want to take advantage of the larger area to combine multiple dies onto a single print form or to combine die-cut with non-die-cut items. Both processes are relatively common production techniques that are not directly supported by existing imposition or planning software.

These production techniques present significant challenges for print converters during the estimation, planning, and impositioning of print orders since they involve multiple cutting steps using different devices such as guillotine cutters and flatbed die cutters. Developed by the Tilia Labs engineering team to address these challenges, this invention is being implemented in tilia Phoenix software. Tilia Phoenix models all printing, cutting, and other devices and utilizes this data in its award-winning Imposition AI module to automatically generate optimized plans covering all steps of the production process, including these multi-cutting scenarios.

Introduced in tilia Phoenix’s 8.0 release, when users drag files into tilia Phoenix, an overlay displays default behavior, and in many cases, provides alternative actions to perform. These actions can be selected as part of the same drag-and-drop action by dragging the file(s) into designated regions within the overlay. Furthermore, multiple actions can now be performed when two or more file types are simultaneously dragged into Phoenix to automate common tasks like placing a die template and snapping artwork files into it or importing a spreadsheet and assigning artwork files to products by filename.

Another key aspect is the ability to control the default actions associated with dragging and dropping specific combinations of file types. This ability to customize default actions has also been incorporated into tilia Phoenix 8.0 via the new “Drag and Drop” section of the preferences dialog.

“The two issued patents further demonstrate our commitment to innovation through disruptive technologies for the industry,” said Scott More, Co-Founder and CTO for Tilia Labs. “We are very pleased with the current version of our flagship product, tilia Phoenix, but our team’s ideas, led by customer feedback, provide a number of ideas to continue to enhance the solution. As long as our customers utilize manual pre-press tasks and continue to run into hurdles during their pre-production processes, our solutions have room to grow.”